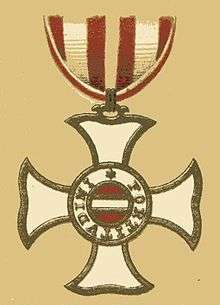 badge of the Order of Maria Theresa 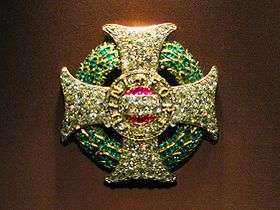 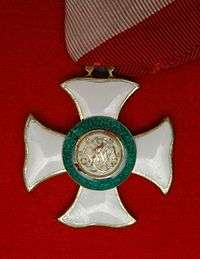 The Military Order of Maria Theresa (Militär-Maria-Theresien-Orden in German, Katonai Mária Terézia-rend in Hungarian, Vojenský řád Marie Terezie in Czech, Wojskowy Order Marii Teresy in Polish, Vojaški red Marije Terezije in Slovenian, Croatian: Vojni Red Marije Terezije[1]) was an Order of the Austro-Hungarian Empire founded on June 18, 1757, the day of the Battle of Kolin, by the Empress Maria Theresa to reward especially meritorious and valorous acts by commissioned officers, including and especially the courageous act of defeating an enemy, and thus, "serving" their monarch. It was specifically given for "successful military acts of essential impact to a campaign that were undertaken on [the officer's] own initiative, and might have been omitted by an honorable officer without reproach." This gave rise to a popular myth that it was awarded for (successfully) acting against an explicit order. It is considered to be the highest honor for a soldier in the Austrian armed services.

A prospective awardee was considered only in regards to their military service record; their ethnicity, birth and rank (as long as he was a commissioned officer) were irrelevant. Knight Cross recipients were automatically ennobled with the title of Ritter in the Austrian nobility for life, and admitted to court. Upon further petition they could also claim the hereditary title of Baron (Freiherr). They were also entitled to a pension. Widows of the order's recipients were entitled to half of their spouse's pension during the remainder of their lives.

The order ceased to be awarded by the Austrian emperor on the fall of the Habsburg Dynasty in 1918, when its last sovereign, Charles I, transferred his powers concerning this honour to the Order Chapter. The Chapter then processed applications until its last meeting in 1931, when it was decided that further awards should not be made. Membership of the order has been awarded a total of 1241 times.

On November 4, 1938, it was decided in Hungary to award further decorations of the order, citing legal continuity as long as Hungary's royal power is exercised by the Regent Miklós Horthy, the Regent shall perform the duties of the Order's Grand Master in Hungary.

During World War II only one person received the Knights's Cross of the Order of Maria Theresia. Major general Kornél Oszlányi commanding officer of the Royal Hungarian Army's 9th Light Infantry Division for the battles at the river Don near Voronezh.[2]

The last surviving knight of the Order was k.u.k. Fregattenleutnant Gottfried Freiherr von Banfield. He received the honour in 1917 for his services as a maritime aviator during World War I and headed the Tripcovich Shipping Company[3] in Trieste after the war. He died in 1986, aged ninety-six.

Recipients of the Order (examples) 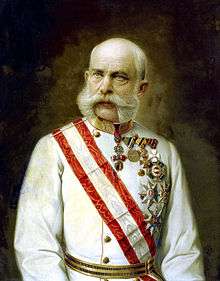