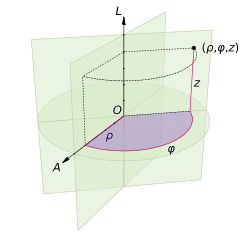 A cylindrical coordinate system with origin O, polar axis A, and longitudinal axis L. The dot is the point with radial distance ρ = 4, angular coordinate φ = 130°, and height z = 4.

The origin of the system is the point where all three coordinates can be given as zero. This is the intersection between the reference plane and the axis.

The axis is variously called the cylindrical or longitudinal axis, to differentiate it from the polar axis, which is the ray that lies in the reference plane, starting at the origin and pointing in the reference direction.

Cylindrical coordinates are useful in connection with objects and phenomena that have some rotational symmetry about the longitudinal axis, such as water flow in a straight pipe with round cross-section, heat distribution in a metal cylinder, electromagnetic fields produced by an electric current in a long, straight wire, accretion disks in astronomy, and so on.

The three coordinates (ρ, φ, z) of a point P are defined as:

The notation for cylindrical coordinates is not uniform. The ISO standard 31-11 recommends (ρ, φ, z), where ρ is the radial coordinate, φ the azimuth, and z the height. However, the radius is also often denoted r or s, the azimuth by θ or t, and the third coordinate by h or (if the cylindrical axis is considered horizontal) x, or any context-specific letter. 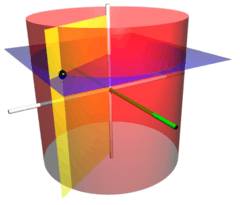 Cylindrical coordinate surfaces. The three orthogonal components, ρ (green), φ (red), and z (blue), each increasing at a constant rate. The point is at the intersection between the three colored surfaces.

In concrete situations, and in many mathematical illustrations, a positive angular coordinate is measured counterclockwise as seen from any point with positive height.

in one direction, and

Many modern programming languages provide a function that will compute the correct azimuth φ, in the range (−π, π], given x and y, without the need to perform a case analysis as above. For example, this function is called by atan2(y,x) in the C programming language, and atan(y,x) in Common Lisp.

The line element is

The volume element is

The del operator in this system leads to the following expressions for gradient, divergence, curl and Laplacian:

The solutions to the Laplace equation in a system with cylindrical symmetry are called cylindrical harmonics.