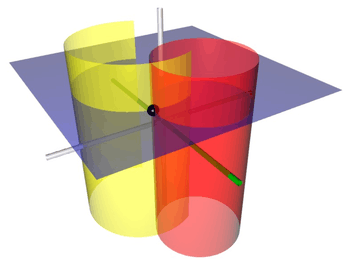 -direction. The two lines of foci

) in the Cartesian coordinate system.

The most common definition of bipolar cylindrical coordinates

to the focal lines

(Recall that the focal lines

correspond to cylinders of different radii

that all pass through the focal lines and are not concentric. The surfaces of constant

are non-intersecting cylinders of different radii

-axis (the direction of projection). In the

plane, the centers of the constant-

cylinders lie on the

The scale factors for the bipolar coordinates

whereas the remaining scale factor

The classic applications of bipolar coordinates are in solving partial differential equations, e.g., Laplace's equation or the Helmholtz equation, for which bipolar coordinates allow a separation of variables (in 2D). A typical example would be the electric field surrounding two parallel cylindrical conductors.

This article is issued from Wikipedia - version of the 4/29/2015. The text is available under the Creative Commons Attribution/Share Alike but additional terms may apply for the media files.