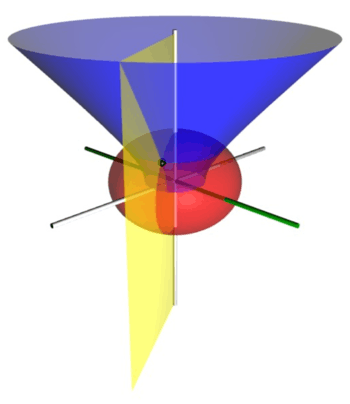 Figure 1: Coordinate isosurfaces for a point P (shown as a black sphere) in oblate spheroidal coordinates (μ, ν, φ). The z-axis is vertical, and the foci are at ±2. The red oblate spheroid (flattened sphere) corresponds to μ = 1, whereas the blue half-hyperboloid corresponds to ν = 45°. The azimuth φ = −60° measures the dihedral angle between the green x-z half-plane and the yellow half-plane that includes the point P. The Cartesian coordinates of P are roughly (1.09, −1.89, 1.66).

Oblate spheroidal coordinates are often useful in solving partial differential equations when the boundary conditions are defined on an oblate spheroid or a hyperboloid of revolution. For example, they played an important role in the calculation of the Perrin friction factors, which contributed to the awarding of the 1926 Nobel Prize in Physics to Jean Baptiste Perrin. These friction factors determine the rotational diffusion of molecules, which affects the feasibility of many techniques such as protein NMR and from which the hydrodynamic volume and shape of molecules can be inferred. Oblate spheroidal coordinates are also useful in problems of electromagnetism (e.g., dielectric constant of charged oblate molecules), acoustics (e.g., scattering of sound through a circular hole), fluid dynamics (e.g., the flow of water through a firehose nozzle) and the diffusion of materials and heat (e.g., cooling of a red-hot coin in a water bath) 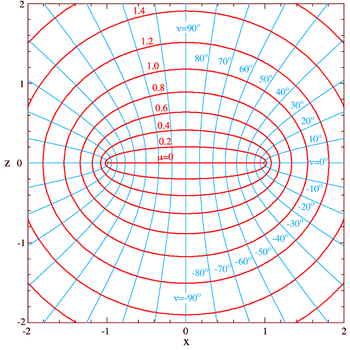 Figure 2: Plot of the oblate spheroidal coordinates μ and ν in the x-z plane, where φ is zero and a equals one. The curves of constant μ form red ellipses, whereas those of constant ν form cyan half-hyperbolae in this plane. The z-axis runs vertically and separates the foci; the coordinates z and ν always have the same sign. The surfaces of constant μ and ν in three dimensions are obtained by rotation about the z-axis, and are the red and blue surfaces, respectively, in Figure 1.

The most common definition of oblate spheroidal coordinates (μ, ν, φ) is

where μ is a nonnegative real number and the angle ν lies between ±90°. The azimuthal angle φ can fall anywhere on a full circle, between ±180°. These coordinates are favored over the alternatives below because they are not degenerate; the set of coordinates (μ, ν, φ) describes a unique point in Cartesian coordinates (x, y, z). The reverse is also true, except on the z-axis and the disk in the x-y plane inside the focal ring.

The surfaces of constant μ form oblate spheroids, by the trigonometric identity

Similarly, the surfaces of constant ν form one-sheet half hyperboloids of revolution by the hyperbolic trigonometric identity

For positive ν, the half-hyperboloid is above the x-y plane (i.e., has positive z) whereas for negative ν, the half-hyperboloid is below the x-y plane (i.e., has negative z). Geometrically, the angle ν corresponds to the angle of the asymptotes of the hyperbola. The foci of all the hyperbolae are likewise located on the x-axis at ±a.

The (μ, ν, φ) coordinates may be calculated from the Cartesian coordinates (x, y, z) as follows. The azimuthal angle φ is given by the formula

The cylindrical radius ρ of the point P is given by

Another method to compute the inverse transform is

The scale factors for the coordinates μ and ν are equal

and the Laplacian can be written

can be expressed in the coordinates (μ, ν, φ) by substituting the scale factors into the general formulae found in orthogonal coordinates.

The orthonormal basis vectors for the

coordinate system can be expressed in Cartesian coordinates as

are the Cartesian unit vectors. Here,

is the same azimuthal unit vector from spherical coordinates, and

lies in the tangent plane to the oblate spheroid surface and completes the right-handed basis set.

Another set of oblate spheroidal coordinates

are sometimes used where

are oblate spheroids and the curves of constant

are the hyperboloids of revolution. The coordinate

The relationship to Cartesian coordinates is

The scale factors for

Knowing the scale factors, various functions of the coordinates can be calculated by the general method outlined in the orthogonal coordinates article. The infinitesimal volume element is:

Following the technique of separation of variables, a solution to Laplace's equation is written:

This yields three separate differential equations in each of the variables:

where m is a constant which is an integer because the φ variable is periodic with period 2π. n will then be an integer. The solution to these equations are:

are associated Legendre polynomials of the first and second kind respectively. The product of the three solutions is called an oblate spheroidal harmonic and the general solution to Laplace's equation is written:

The constants will combine to yield only four independent constants for each harmonic. 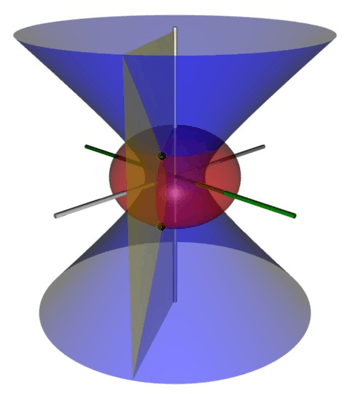 Figure 3: Coordinate isosurfaces for a point P (shown as a black sphere) in the alternative oblate spheroidal coordinates (σ, τ, φ). As before, the oblate spheroid corresponding to σ is shown in red, and φ measures the azimuthal angle between the green and yellow half-planes. However, the surface of constant τ is a full one-sheet hyperboloid, shown in blue. This produces a two-fold degeneracy, shown by the two black spheres located at (x, y, ±z).

have a simple relation to the distances to the focal ring. For any point, the sum

of its distances to the focal ring equals

. Thus, the "far" distance to the focal ring is

, whereas the "near" distance is

Similar to its counterpart μ, the surfaces of constant σ form oblate spheroids

The scale factors for the alternative oblate spheroidal coordinates

whereas the azimuthal scale factor is

Hence, the infinitesimal volume element can be written

As is the case with spherical coordinates, Laplaces equation may be solved by the method of separation of variables to yield solutions in the form of oblate spheroidal harmonics, which are convenient to use when boundary conditions are defined on a surface with a constant oblate spheroidal coordinate (See Smythe, 1968).