Not to be confused with Ecliptic coordinate system. 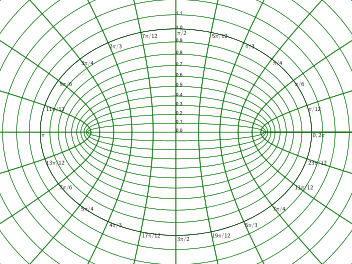 are generally taken to be fixed at

-axis of the Cartesian coordinate system.

The most common definition of elliptic coordinates

is a nonnegative real number and

On the complex plane, an equivalent relationship is

These definitions correspond to ellipses and hyperbolae. The trigonometric identity

shows that curves of constant

shows that curves of constant

Using the double argument identities for hyperbolic functions and trigonometric functions, the scale factors can be equivalently expressed as

and the Laplacian reads

An alternative and geometrically intuitive set of elliptic coordinates

are sometimes used, where

. Hence, the curves of constant

are ellipses, whereas the curves of constant

are hyperbolae. The coordinate

coordinate must be greater than or equal to one.

have a simple relation to the distances to the foci

. For any point in the plane, the sum

of its distances to the foci equals

. Thus, the distance to

, whereas the distance to

, so the conversion to Cartesian coordinates is not a function, but a multifunction.

The scale factors for the alternative elliptic coordinates

Elliptic coordinates form the basis for several sets of three-dimensional orthogonal coordinates. The elliptic cylindrical coordinates are produced by projecting in the

-axis, i.e., the axis connecting the foci, whereas the oblate spheroidal coordinates are produced by rotating the elliptic coordinates about the

The classic applications of elliptic coordinates are in solving partial differential equations, e.g., Laplace's equation or the Helmholtz equation, for which elliptic coordinates are a natural description of a system thus allowing a separation of variables in the partial differential equations. Some traditional examples are solving systems such as electrons orbiting a molecule or planetary orbits that have an elliptical shape.

The geometric properties of elliptic coordinates can also be useful. A typical example might involve an integration over all pairs of vectors

that sum to a fixed vector

, where the integrand was a function of the vector lengths

. (In such a case, one would position

between the two foci and aligned with the

could represent the momenta of a particle and its decomposition products, respectively, and the integrand might involve the kinetic energies of the products (which are proportional to the squared lengths of the momenta).