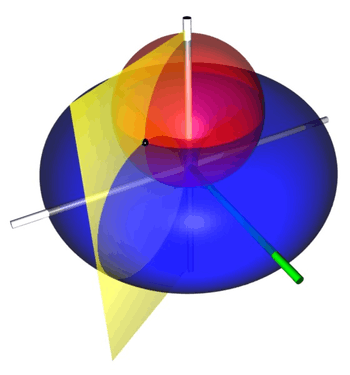 Illustration of toroidal coordinates, which are obtained by rotating a two-dimensional bipolar coordinate system about the axis separating its two foci. The foci are located at a distance 1 from the vertical z-axis. The red sphere is the σ = 30° isosurface, the blue torus is the τ = 0.5 isosurface, and the yellow half-plane is the φ = 60° isosurface. The green half-plane marks the x-z plane, from which φ is measured. The black point is located at the intersection of the red, blue and yellow isosurfaces, at Cartesian coordinates roughly (0.996, −1.725, 1.911).

in bipolar coordinates become a ring of radius

plane of the toroidal coordinate system; the

-axis is the axis of rotation. The focal ring is also known as the reference circle.

The most common definition of toroidal coordinates

to opposite sides of the focal ring

The coordinate ranges are 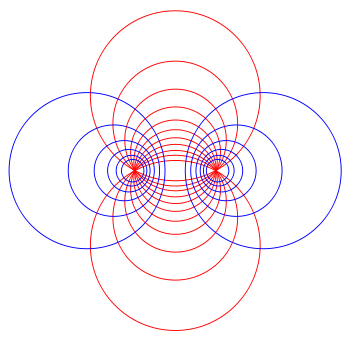 correspond to spheres of different radii

that all pass through the focal ring but are not concentric. The surfaces of constant

are non-intersecting tori of different radii

that surround the focal ring. The centers of the constant-

spheres lie along the

-axis, whereas the constant-

tori are centered in the

The (σ, τ, φ) coordinates may be calculated from the Cartesian coordinates (x, y, z) as follows. The azimuthal angle φ is given by the formula

The cylindrical radius ρ of the point P is given by 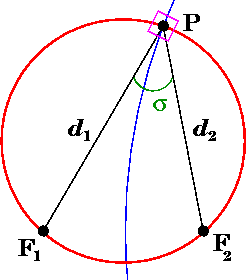 Geometric interpretation of the coordinates σ and τ of a point P. Observed in the plane of constant azimuthal angle φ, toroidal coordinates are equivalent to bipolar coordinates. The angle σ is formed by the two foci in this plane and P, whereas τ is the logarithm of the ratio of distances to the foci. The corresponding circles of constant σ and τ are shown in red and blue, respectively, and meet at right angles (magenta box); they are orthogonal.

The coordinate τ equals the natural logarithm of the focal distances

whereas the coordinate σ equals the angle between the rays to the foci, which may be determined from the law of cosines

where the sign of σ is determined by whether the coordinate surface sphere is above or below the x-y plane.

The scale factors for the toroidal coordinates

admits solution via separation of variables in toroidal coordinates. Making the substitution

A separable equation is then obtained. A particular solution obtained by separation of variables is:

where each function is a linear combination of:

Toroidal harmonics have many interesting properties. If you make a variable substitution

then, for instance, with vanishing order (the convention is to not write the order when it vanishes) and

Alternatively, a different substitution may be made (Andrews 2006)

Again, a separable equation is obtained. A particular solution obtained by separation of variables is then:

where each function is a linear combination of:

Note that although the toroidal harmonics are used again for the T  function, the argument is

indices are exchanged. This method is useful for situations in which the boundary conditions are independent of the spherical angle