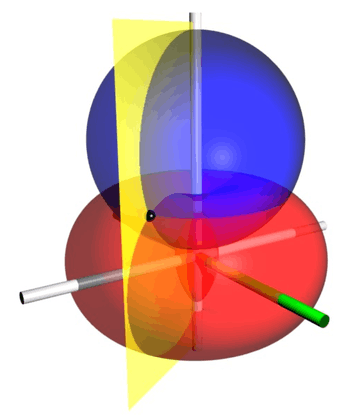 Illustration of bispherical coordinates, which are obtained by rotating a two-dimensional bipolar coordinate system about the axis joining its two foci. The foci are located at distance 1 from the vertical z-axis. The red self-intersecting torus is the σ=45° isosurface, the blue sphere is the τ=0.5 isosurface, and the yellow half-plane is the φ=60° isosurface. The green half-plane marks the x-z plane, from which φ is measured. The black point is located at the intersection of the red, blue and yellow isosurfaces, at Cartesian coordinates roughly (0.841, -1.456, 1.239).

in bipolar coordinates remain points (on the

-axis, the axis of rotation) in the bispherical coordinate system.

The most common definition of bispherical coordinates

that all pass through the foci but are not concentric. The surfaces of constant

are non-intersecting spheres of different radii

that surround the foci. The centers of the constant-

spheres lie along the

-axis, whereas the constant-

tori are centered in the

The formulae for the inverse transformation are:

The scale factors for the bispherical coordinates

This article is issued from Wikipedia - version of the 8/25/2014. The text is available under the Creative Commons Attribution/Share Alike but additional terms may apply for the media files.