The Penn Central Transportation Company, commonly abbreviated to Penn Central, was an American Class I railroad headquartered in Philadelphia, Pennsylvania, that operated from 1968 until 1976. It was created by the 1968 merger of the Pennsylvania and New York Central railroads. The New York, New Haven & Hartford Railroad was added to the merger in 1969; by 1970, the company had filed for what was, at that time, the largest bankruptcy in U.S. history.

Background of the merger

The Penn Central was created as a response to challenges faced by all three railroads in the late 1960s. The northeastern quarter of the United States, these railroads' service area, was the most densely populated region of the U.S. While railroads elsewhere in North America drew a high percentage of their revenues from the long-distance shipment of commodities such as coal, lumber, paper and iron ore, Northeastern railroads traditionally depended on a mix of services, including:

These labor-intensive, short-haul services were all vulnerable to competition from automobiles and buses (for the first two services) and the trucking industry (for the remaining three), particularly where facilitated by four-lane highways. In 1956, Congress had passed, and President Dwight D. Eisenhower had signed, the Federal-Aid Highway Act of 1956. This law authorized construction of the vast Interstate Highway System, which provided an economic boost to the trucking industry.[1]

Another significant problem was the inability of the New York Central and Pennsylvania railroads to respond to market conditions. The railroad industry at the time was heavily regulated by the Interstate Commerce Commission (ICC) and was unable to change the rates it charged shippers and passengers. Therefore, reducing costs was the only way to become more profitable. Government regulation and agreements with labor unions tightly restricted what cost-cutting could take place. A merger seemed to be a promising way out of a difficult situation. 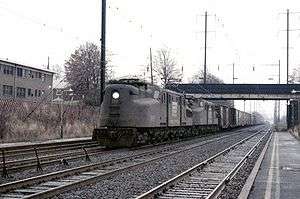 The merged Penn Central was little better off than its constituent railroads were before. A merger implementation plan was drawn up, but not carried out. Attempts to integrate operations, personnel and equipment were not very successful, due to clashing corporate cultures, incompatible computer systems, and union contracts.[2]:233–234 Track conditions deteriorated (some of these conditions were inherited from the three merged railroads) and trains had to be run at reduced speeds, resulting in delayed shipments and personnel working extensive overtime. As a result, operating costs soared. Derailments and wrecks became frequent, particularly in the Midwest.[3]

Penn Central management created a holding company, the Penn Central Company, and tried to diversify the troubled firm into real estate and other non-railroad ventures, but, in a slow economy, these businesses performed little better than the railroad assets. In addition, these new subsidiaries diverted management attention away from the problems in the core business. To make matters worse, management insisted on paying dividends to shareholders to create the illusion of success. The company had to borrow more and more to keep operating. The interest on the loans became an unbearable financial burden.

PC's poor shipment of Maine potatoes resulted in many rotting before they could get to market. In the winter of 1969, most of Maine's potato production froze in PC's Selkirk Yard after being transferred from the Bangor & Aroostook Railroad. Unable to collect damages from the bankrupt PC, many Maine potato farmers went out of business, while those who survived the loss of their crop ceased shipping potatoes by rail, ending a profitable market for Maine's railroads.[4]

The Penn Central's bankruptcy was the final blow to long-haul private-sector passenger train service in the United States. The troubled company filed proposals with the ICC to abandon most of its remaining passenger rail service, causing a chain reaction among its fellow railroads. In 1971 Congress created Amtrak, a government corporation, which began to operate a skeleton passenger service on the tracks of Penn Central and other U.S. railroads.

During the 1980s, the deregulated Conrail had the muscle to implement the route reorganization and productivity improvements that the Penn Central had unsuccessfully tried to implement during 1968 to 1970. Many miles of old Pennsylvania and New York Central track were abandoned to adjacent landowners or rail trail use. The stock of the subsequently-profitable Conrail was refloated on Wall Street in 1987, and the company operated as an independent, private-sector railroad from 1987 to 1999.

The Pennsylvania New York Central Transportation Company was formed February 1, 1968, as an absorption of the NYC by the PRR. The trade name of "Penn Central" was adopted, and on May 8, the company was officially renamed to the Penn Central Company.

The old Pennsylvania Company, a holding company chartered in 1870, reincorporated in 1958, and long a subsidiary of the PRR, remained a separate corporate entity throughout the period following the merger. While the PCTC had been merged into Conrail in 1976, the holding company, the Penn Central Company, continued as a separate firm. In the 1970s and 1980s, the new PC was a small conglomerate that largely consisted of the diversified sub-firms acquired by the old PC before the crash.

Among the properties Penn Central owned when Conrail was created were the Buckeye Pipeline and a 24 percent stake in New York's Madison Square Garden (which stands above Penn Station) and its prime tenants, the New York Knicks basketball team and New York Rangers hockey team.

Though the new PC retained ownership of some rights of way and station properties connected with the railroads, it continued to liquidate these and eventually concentrated on one of its subsidiaries in the insurance business. Penn Central Corporation changed its name to American Premier Underwriters in March 1994. It became part of the Cincinnati financial empire of Carl Lindner and his American Financial Group. Up until late 2006, American Financial Group still owned Grand Central Terminal, though all railroad operations were managed by the New York Metropolitan Transportation Authority (MTA) through a lease that began in 1994. The current lease with the MTA was negotiated to last through February 28, 2274.

On December 6, 2006, the U.S. Surface Transportation Board approved the sale of several of American Financial Group's remaining railroad assets to Midtown TDR Ventures LLC[8] for approximately US$80 million. The New York Post on July 6, 2007 reported that Midtown TDR was controlled by Penson and Venture. The Post noted that the MTA would pay $2.24 million in rent in 2007 and has an option to buy the station and tracks in 2017. However, Argent could also opt to extend the date another 15 years to 2032.[9]

The assets included the 156 miles (251 km) of rail used by the Metro-North Railroad Harlem and Hudson Lines, and Grand Central Terminal in New York City. The most valuable asset cited by Midtown TDR were the unused "air rights" for additional development above Grand Central's underground boarding platforms and switch yard. The platforms and yards extend for several blocks north of the terminal building under numerous streets and existing buildings leasing air rights, including the famous MetLife Building and Waldorf-Astoria Hotel. The cash value of the Terminal building itself is limited. In spite of the fact the Terminal was originally designed to accommodate a skyscraper above it, as the building is listed for purposes of historic preservation it cannot, under current law, be torn down for redevelopment.[9]