Perur Pateeswarar Temple is a Hindu temple dedicated to Shiva located at Perur, in western part of Coimbatore in state of Tamil Nadu in India. The temple was built by Karikaala Chozhan."History of perur temple". Retrieved 15 October 2011.  The temple is located 7 km west of the Noyyal River and has been patronized by poets like Arunagiri Nathar and Kachiappa Munivar. Lord Shiva, known as ‘Patteeswarar’, is the presiding deity of this temple together with his consort Parvati, who is known as ‘Pachainayaki’. The deity is believed to be ‘Swayambu Lingam’ (self emerged). 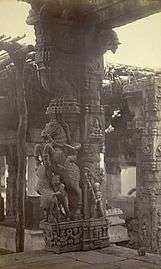 This temple has several gopurams and halls, famous of which is the one with the golden statue of Nataraja. The pillars have carvings of the various manifestations of Shiva and the ceiling has a series of stone chains.[1]

There is a Patti Vinayagar shrine, dedicated to Ganesha. The Arasambalavanar Shrine dedicated to Shiva at the spot where Shiva is believed to have performed his Thandav under a peepul tree.There are also statues of Gajasamhara, Virabhadra, Bikshadana, Oordhva Thandava, Saraswati with Veena. The sacred trees associated with temple are the Palm and tamarind trees, called Irava Panai and Pirava Puli.

Every year the temple celebrates a classical dance week, typically Bharata Natyam. The most prominent and talented dance schools of the city and even some from other cities take turns to awe the audience with their performance.[2]