Palar (Tamil: பாலாறு நதி), (Kannada: ಪಾಲಾರ್ ನದಿ), (Telugu: పాలార్ నది) is a river of southern India. It rises in Nandi Hills, India in Kolar district of Karnataka state,[1] and flows 93 kilometres (58 mi) in Karnataka, 33 kilometres (21 mi) in Andhra Pradesh and 222 kilometres (138 mi) in Tamil Nadu before its confluence into the Bay of Bengal at Vayalur about 100 kilometres (62 mi) south of Chennai.[2] It flows as an underground river for a long distance only to emerge near Bethamangala town, from where, gathering water and speed, it flows eastward down the Deccan Plateau. The cities of Ramanaickenpet, Vaniyambadi, Ambur, Gudiyatham, Vellore, Melvisharam, Arcot, Walajapet (Anaicut), Kanchipuram, and Chengalpattu are located on banks of Palar River. Of all the total of seven tributaries, the chief tributary is Cheyyar River.

Palar river water from Palar anicut is diverted to the Poondi reservoir located in Kosasthalaiyar River basin and to Chembarambakkam Lake located in Adayar River basin.[3] These two reservoirs are major water supply points to Chennai city. After commissioning of the Telugu Ganga project to supply nearly 1000 million litres per day of Krishna River water to the Chennai city, the dependence on Palar river water has reduced drastically. 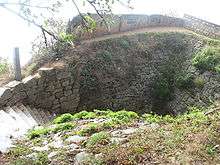 Source of Palar at Nandi Hills

Andhra Pradesh Government is constructing an irrigation dam across Palar at Ganeshpuram, near Kuppam, Andhra Pradesh which has caused agitation among the people of the five northern districts of Tamil Nadu, namely Vellore, Kancheepuram, Tiruvannamalai, Thiruvallur and Chennai benefited by the river. Tamil Nadu Chief Minister Jayalalitha voiced her opposition to this proposal and said "Palar is an inter-state river and was also one of the rivers mentioned in Schedule A annexed to the 1892 agreement[4] which is in force as per Interstate River Water Disputes Act 1956. As per a clause of the agreement, the upstream state should not build any new dam or any structure to obstruct, divert, or store waters of the rivers without the consent of the downstream state".[5][6]

A documentary called "En Peyar Palar" produced by Social Action Movement and Water Rights Protection Group, Chengalpattu and released on 30 June 2008 chronicles the plight of the river from its origin in Karnataka till it joins Bay of Bengal. The 85-minute documentary delves into how activities such as sand quarrying and discharge of industrial effluents are sucking the life out of one of Tamil Nadu’s prime sources of drinking water. It was directed by R.R. Srinivasan.[9]

This river is so important for irrigation in the north and south Arcot districts of Tamil Nadu, but it flows a meager distance of 50 kilometres (31 mi) in Andhra Pradesh, where the Palar river had been seen dry for almost 20 years. Palar has been home for mud robbery and other illegal activities.

Venugopalaswami Temple is a historic temple located on the banks of the river.[10]

It was a sight to behold for residents of Vellore as water flowed into the Palar near Pallikonda on Tuesday breathing life into the dry river after almost 10 years. “Water has reached for more than four kilometres from Pallikonda bridge to Kandaneri. Palar is witnessing water flow after 10 years” an official said. Water level has gone up in the Aanaimadagu dam near Ambur. There was heavy water flow at the Jalagamparai and Amirthi water falls following the rains.