This article is about a town in Coimbatore district. For other uses, see Mettupalayam.

Mettupalayam is a taluk of Coimbatore Rural district, located to the north of the city of Coimbatore on the way to Ooty. It is located in the foot hills of Nilgiri hills about 38 km north of downtown Coimbatore, in the Indian state of Tamil Nadu. Mettupalayam is the third largest township in the district and one of the fast developing suburbs on the northern side of Coimbatore. As of 2011, the town had a population of 66,595. 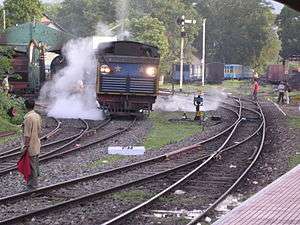 The Kotagiri road is a walking spot where one can see spotted deer and elephants. Major temples include Vana Bathrakali Amman temple, Idugampalayam Aanjineyar temple, Then Tirupathi, Kurunthamalai and Kumaran Kundru Murugan temples and Karamadai Ranganadar temple. Black Thunder is a theme park in Mettupalayam.