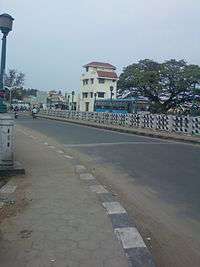 Aathupalam Bridge in Coimbatore over the Noyyal.

The Noyyal River is a small river in Western Tamil Nadu, and a tributary of Kaveri River. It rises from the Vellingiri hills in the Western Ghats in Tamil Nadu, very close to Kerala border, and flows through many villages and the cities of Coimbatore and Tirupur, finally draining into the Kaveri River at Noyyal, a village in Karur district named after the river itself. The river's basin is 180 km (110 mi) long and 25 km (16 mi) wide and covers a total area of 3,500 km2 (1,400 sq mi). Cultivated land in the basin amounts to 1,800 km2 (690 sq mi) while the population density is 120 people per km² (311/mi²) in the countryside, and 1000 people per km² (2590/mi²) in the cities. The area is known for its scanty rainfall and the development of the Noyyal River Tanks System to hold any overflow from the rains plus the water of the Northeast and Southwest monsoon season was ecologically important. The 173 km (107 mi) long tributary of the Kaveri River]filled 32 tanks. These interconnecting tanks held the water flowing from the Noyyal.[1]

The township of Coimbatore once was surrounded by the Noyyal river and its canals, tanks, and rivulets. The Noyyal river and its interconnected tank and canal system, believed to have been originally built by the Chalukya Cholas kings, was then an efficient system that provided water transport, storage, and maintained stable groundwater levels. Surplus water from the Noyyal river spilled into the canals and were channeled to the tanks, preventing unwanted flooding. The tanks were a major factor in replenishing the ground water through percolation of the subsoil water. As urbanisation grew, the system was neglected and the number of functional tanks was drastically reduced until only eleven were left. Today the system no longer works and water is scarce. Agriculture has significantly decreased. Lacking irrigation water, lakhs of Coconut trees in the area have dried up.[2][3]

The "Noyyal" is a sacred river in Tamil history. Its original name was Kanchinadi but changed later to the name of the place where it drains into the Kaveri River in 1750 A.D.

The Noyyal village is situated at the banks of Noyyal and Kaveri (Ponni) Rivers where they both merge. An ancient temple to the goddess Sellandiyamman is also situated at Sangamam. This temple belongs to "Karadi" Kulam people of Kongunadu Vettuva Gounder community.

The Western region of Tamil Nadu was known as the Kongunadu. Though during the supremacy of the Chera kings, Kongunadu was the heartland of the Cheras with Karur as their capital. Next came the Gangas (Kongas) with their capital in Dharapuram (Tarakapuri or Vijayaskandapuram). Then it fell under the later Cholas and was under their control for a short time of five kings from Veerachozha to Rajaraja. The heirs to the Cholas settled in Coimbatore and continued to rule the country. The Kongu Cholas were soon defeated by the native Kongu vassals under the Hoysalas. Then Vijayanagara, Mysore, and Dheeran Chinnamalai ruled Kongu which in 1805 was annexed by the British East India Company. 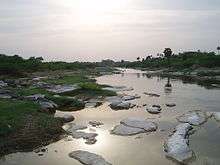 Successive dynasties established trade links with the Greeks and the Romans. Many trade routes crisscrossed the basin. A number of temples and schools were established in the area. The Patteeshwarar Temple at Perur was built in line with Tamil architecture. Art flourished in the basin. Even today Natyanjali is held in Perur every year.

A part of the Roman spice route, about 80% of Roman coins excavated in Tamil Nadu were in Vellalore, says R. Jagadeesan, office representative of Kongu Kalai Kalanchiyam. It had agriculture-based settlement and was known as "Velleer Oor." Roman trade happened here even before the 1st century AD.

A critical issue is the pollution of the rivers Noyyal and Nallaru originating and flowing in the Kongu region. The river flows with natural antibiotic minerals. The entire Orathuppalayam Dam has become a tank holding effluent and releases water after every rainfall, effectively polluting the down river villages in the Tirupur and Karur district.

However, from 2004 onwards, efforts by local volunteers organization Siruthuli have been trying to conserve the water resource. After several petitions from 2003 to 2011, dying and bleaching units were ordered closed on the river until zero liquid discharge status was achieved.

the Cheyyar River and the Kanchimanadhi are the tributaries to the river. They all have their origins in the Western Ghats. Periar flows out of the Siruvani hills and the Kovai Kutralam, a landmark waterfalls. Chaadiaar or Cheyyar River flows through Chaadivayal and later along with the other rivers join up at Kooduthurai to become Noyyal River.

After running through a distance of 180 km (110 mi), Noyyal joins with river Cauvery near Kodumudi, the place is also called Noyyal, Karur District. Apart from these three rivers, there are numerous rivulets that also join Noyyal. But most of these rivulets carry water only during the rainy season and therefore are not perennial. According to the available sources, the number of rivulets are 34.

The river has a valley fill (made of alluvial kankar soil) over a stretch of 25 km (16 mi) and a depth of 198 ft (60 m). It extends from the origin of the river at Kooduthurai (in Madhvarayapuram, 30 km (19 mi) west of the city) to the Ukkadam Tank on the city border. The fill absorbs water like a sponge. Only when the absorption reaches a saturation point does excess water flow to the suburbs and the city.