Valparai is a Taluk and hill station in the Coimbatore district of Tamil Nadu, India. It is located 3,500 feet (1,100 m) above sea level on the Anaimalai Hills range of the Western Ghats, at a distance of 100 kilometres (62 mi) from Coimbatore and 65 kilometres (40 mi) from Pollachi. There are 40 hairpin bends on the way up to Valparai from Azhiyar. While major portions of the land are owned by private tea companies, large forest areas continue to be out of bounds.[2] As of 2011, the town had a population of 70,859.

Earliest records of this area are from the year 1846 when Ramasamy Mudaliyar started coffee plantation here. In 1864, the Karnatic Coffee Company began their coffee plantation here but they could not make it profitable, hence they sold part of their land. In 1875, the roads and guest houses were built by soldiers for the visit of England’s Prince of Wales, the future Edward VII. Soldiers were posted here and horses and elephants were used for this purpose. However, the visit was eventually cancelled. In 1890, W. Wintil and Nordan bought a huge portion of land in Valparai from the Madras State Government under the British Raj. Wintil deforested the area and planted tea and coffee. He was assisted by Carwer Marsh, an experienced planter for a salary of 250 rupees.[3]

The economy of Valparai depends on plantation crops. Valparai has a high concentration of tea and coffee estates. Most of the people living here work in these estates.[7][8] The Government of Tamil Nadu in collaboration with ITDC initiated Tourism promotion through infrastructure development including Resort hotels and Amusement parks to attract tourists.[9] 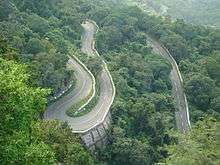 Valparai is a mid-elevation hill station (Ootacamund is considerably higher). The tea plantations are surrounded by evergreen forest. The region is also a rich elephant tract and is known to have many leopards.[11] The drive to the town from Pollachi passes through the Indira Gandhi Wildlife Sanctuary noted for elephants, boars, lion-tailed macaques, gaur, spotted deer, sambar, and giant squirrels. The area is also rich in birds, including the great hornbill. Water bodies at Monkey Falls and Aliyar Dam are also seen en route. Valparai receives among the highest rainfall in the region during the monsoons (around June).

The Valparai range is also habitat to the Nilgiri tahr, an endemic wild ungulate. These mountain goats inhabit the high ranges and prefer open terrain, cliffs and grass-covered hills, a habitat largely confined to altitudes from 1200 to 2600m in the southern Western Ghats. Their territory extended far and wide all along these hills in the past, but, because of hunting and large-scale habitat destruction, they now exist only in a few isolated sites like the Anaimalai Hills.[12] The human-elephant conflict here is a delicate issue. The tea plantations are a hindrance to the movement of wildlife, particularly elephants who walk large distances to reach water bodies and feeding areas.[13]