Pollachi is a town and a taluk headquarters in Coimbatore district, Tamil Nadu state, India. Located about 40 km to the south of Coimbatore, it is the second largest town in the district after Coimbatore. Pollachi is a very popular Marketplace, with large markets for jaggery and vegetables and is considered to be South India's biggest Cattle market.[2] As of 2011, the town had a population of 90,180.

Pollachi was known as Pozhil Vaitchi in Tamil which became Pollachi. It was also known as Mudi Konda Chola Nallur during the period of the Cholas.[3]

The economy of the town is predominantly dependent on agriculture. Coconut, jaggery, vegetables and cattle contribute to the agricultural output. Pollachi is also a popular movie shooting location for the Tamil film industry; it is preferred for outdoor shooting because of its scenic landscape.[8] 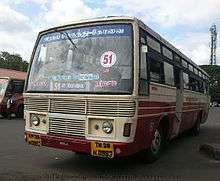 A city bus in Pollachi

Pollachi is linked by National Highway 209, State Highway 19, SH 78 and SH 78A. The central bus stand caters for bus transport which is used by Government-run TNSTC and private operators. A new bus stand has been constructed opposite the old bus stand replacing the latter. TNSTC operates city and inter city buses services from Pollachi. It has three depots at Pollachi. State Express Transport Corporation (Tamil Nadu) operates long distance buses and has an online reservation center.

Pollachi Railway Junction connects with Palakkad Junction to the west, Podanur and Coimbatore Junctions to the north and Dindigul Junction to the east. Metre to broad gauge conversion was completed in 2015, starting its service from January 9, 2015 for the Pollachi Jn - Dindigul Jn section. The Pollachi section was added to the Palakkad Railway Division from 2007.[9] Palani to Pollachi train services began from January 2015.[10] Pollachi to Podanur broad gauge conversion is in progress. 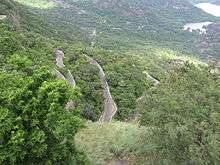 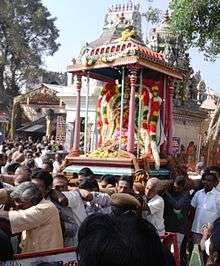 Anamalai Wildlife Sanctuary is situated at an average altitude of 1,400 meters in the Western Ghats near Pollachi. Valparai is about 65 km from Pollachi and is situated at an altitude of 3500 feet above the sea level. Valparai can be reached via Azhiyar through a hilly road with 40 hair pin bends. Topslip is a point located at an altitude of about 800 feet in the Anamalai mountain range. It is about 37 km from Pollachi, and this small town serves as an ideal picnic spot with its wooden log houses and safaris. Chinnakallar receives the highest rainfall in Tamil Nadu.[11]

Parambikulam Wildlife Sanctuary is situated in the valley between the Anaimalai Hills of Tamil Nadu and the Nelliampathi range of Kerala. The area is hilly and rocky, drained by several rivers, including Parambikulam, Sholayar and Thekkady. It is thickly forested with bamboo, sandalwood, rosewood and teak, the sanctuary has some marshy land and scattered patches of grassland. Kannimara, one of the oldest and largest teak trees, is another attraction in the sanctuary. It had a girth of 6.52 metres, height of 48.25 metres when the measurement was taken in 2003.[12][13]

Parambikulam-Aliyar multipurpose project involves a series of dams interconnected by tunnels and canals at various elevations to harness the Parambikulam, Aliyar, Nirar, Sholiyar, Thunkadavu, Thenkkadi and Palar rivers, laid for irrigation and power generation. The Azhiyar Dam is located on the foothills of Anamalai in the Western Ghats. Monkey falls deriving its name due to the abundance of monkeys found in the region is located close to the dam. Solaiyar Dam is 15 km from Valparai and is one of the largest rock dams in India. The length of the reservoir it impounds is about 20 km.