Bhavani is a major river in Kongu Nadu region of Tamil Nadu, India. It is the second longest river in Tamil Nadu and a major tributary of the Kaveri River.

Bhavani river originates from Nilgiri hills of the Western Ghats, enters the Silent Valley National Park in Kerala and flows back towards Tamil Nadu. The Bhavani is a 217-kilometre (135 mi) long perennial river fed mostly by the southwest monsoon and supplemented by the northeast monsoon. Its watershed drains an area of 0.62 million hectares (2,400 sq mi) spread over Tamil Nadu (87%), Kerala (9%) and Karnataka (4%). The main river courses majorly through Coimbatore district and Erode district in Tamil Nadu. About 90 per cent of the river's water is used for agriculture irrigation.

The confluence of the Bhavani and Kaveri rivers at Bhavani

Twelve major rivulets including West and East Varagar rivers join Bhavani draining the southern Nilgiri slopes. At Mukkali, Bhavani takes an abrupt 120-degree turn towards the northeast and flows for another 25 kilometres (16 mi) through Attappady plateau. It gets reinforced by the Kunda river coming from the north. Siruvani river, a perennial stream and the Kodungarapallam river, flowing from the south and southeast respectively join the Bhavani at Kerala-Tamil Nadu border.[1] The river then flows east along the base of Nilgiris and enters the plains near Bathra Kaliamman temple at Mettupalayam after joining with Coonoor river coming from northwest.

About 30 kilometres (19 mi) downstream, Moyar River, a major tributary originating in Mudumalai National Park, flows in from the northwest, where it drains the valley between the northern slopes of the Nilgiris and the southern slopes of the Bilgiri Hills. After the Moyar it is blocked by the Lower Bhavani Dam, feeding Lower Bhavani Project Canal near Sathyamangalam in Erode District. The river continues east for over 160 kilometres (99 mi) through Erode District, traversing Kodiveri Dam, near Gobichettipalayam which feeds the Arakkankottai and Thadappalli canals constructed for agricultural purposes.[2] A small barrage across the river was built by Kalingarayan in 1283 AD to feed the 90-kilometre (56 mi) Kalingarayan irrigation canal.[3] The river joins Kaveri at Kooduthurai near Sangameswarar Temple, Bhavani where it is believed that the mystic Sarasvati River also joins the confluence.[4][5] 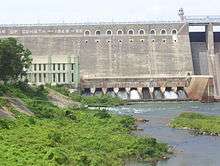 Bhavanisagar dam is located on the Bhavani river in Erode district, Tamil Nadu, India.[6] The dam is one of the largest earthen dams in the world.[7] The dam is situated some 16 km (9.9 mi) west of Sathyamangalam and 35 km (22 mi) from Gobichettipalayam.[8] The Lower Bhavani Project was the first major irrigation project initiated in India after independence in 1948. It was completed by 1955 and opened for use in 1956.[7] The dam was constructed at a cost of ₹210 million (US$3.1 million).[7]

Kodiveri dam is located on the Bhavani River near Gobichettipalayam in Western Tamil Nadu. The dam is situated along the State Highway 15 about 15 km (9.3 mi) from Gobichettipalayam towards Sathyamangalam. It was constructed by Kongalvan in the year 1125 AD.[9]

Industrial, municipal and agricultural pollution of the river results in poor water quality and negative impacts on the health of people, plants and animals dependent on the river water.[10]