Born in Easton, Maryland, he graduated from Dickinson College in Pennsylvania in 1830. He studied law and became a lawyer in Easton. He was a delegate to the Maryland's constitutional convention in 1836 and a member of the Maryland House of Delegates in 1838, 1843, and 1845. He was elected as a Democrat to the 26th Congress in 1838 from the 2nd Congressional district of Maryland, but declined to run again in 1840. He went back to his law practice, but returned to politics eight years later when he was elected the 28th Governor of Maryland, a position he held through 1851.

From 1851 to 1853, he was Comptroller of Maryland and then collector of the port of Baltimore from 1853 to 1860, and United States Commissioner of Patents for a fragment of that year (February through December). He was appointed United States Secretary of the Treasury in the Presidential Cabinet of President James Buchanan and served from December 12, 1860 to January 14, 1861. 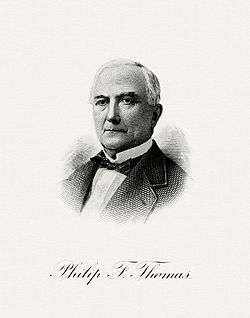 Bureau of Engraving and Printing portrait of Thomas as Secretary of the Treasury.

When Howell Cobb, the 22nd Secretary of the Treasury resigned in 1860, Buchanan appointed Thomas the 23rd Secretary. Thomas reluctantly accepted the position. Immediately upon entering office, Thomas had to market a bond to pay the interest on the public debt. There was little faith in the stability of the country due to the threat of secession by the Southern states, and war appeared inevitable. Northern bankers refused to invest in Thomas's loan, wary that the money would go to the South. Following Interior Secretary Jacob Thompson, Thomas resigned after only a month in response to his failure to obtain the loan.

Two years later, he again became a member of the Maryland House of Delegates in 1863. He presented credentials as a Senator-elect to the United States Senate for the term beginning March 4, 1867, but was not seated as a person "who had given aid and comfort" to the Confederate cause. He was then elected as a Democrat to the 44th Congress from the 1st Congressional district of Maryland, serving from 1875 to 1877, and declined to be a candidate for renomination in 1876.

He was an unsuccessful candidate for election to the United States Senate in 1878. He returned to the Maryland House of Delegates twice, in 1878 and 1883, and then resumed the practice of law in Easton.

He died in Baltimore in 1890 and is buried in Spring Hill Cemetery in Easton.