James Guthrie (December 5, 1792 – March 13, 1869) was a U.S. Senator from Kentucky and served as Secretary of the Treasury in the administration of President Franklin Pierce.

James Guthrie was born to General Adam and Hannah (Polk) Guthrie near Bardstown, Nelson County, Kentucky on December 5, 1792.[1] Though his immediate ancestors came from Ireland, Guthrie was of Scottish descent.[2] He was lineally descended from a martyred Scottish clergyman of the same name.[2]

Guthrie's father was a pioneer and Indian fighter from Virginia who developed a large plantation in Kentucky and served in the state's General Assembly from 1800 to 1805, and again in 1808.[3] Guthrie received his early education in a log schoolhouse.[1] Due to his father's military service, he completed his studies at McAllister's Military Academy in Bardstown.[4]

In 1812, Guthrie found employment on a flatboat transporting goods down the Ohio and Mississippi Rivers to New Orleans, Louisiana.[1][3] After three such trips, he decided this work was unfulfilling, and, along with Ben Hardin and Charles A. Wickliffe, began to study law under Judge John Rowan.[5] He was admitted to the bar in 1817, and commenced practice in Bardstown.[6]

In 1820, Governor John Adair appointed Guthrie as Commonwealth's Attorney for the Commonwealth of Kentucky, whereupon Guthrie relocated to Louisville.[1] In 1824, he served on a committee whose aim was to obtain city status for Louisville.[11] The effort failed, but Guthrie was elected to the town's board of trustees, and later became its chair.[11]

The following year, Guthrie was chosen as director of the newly formed Louisville and Portland Canal Company.[7] He was instrumental in securing federal funding for a bypass around the Falls of the Ohio, although newly elected president Andrew Jackson cut off these funds in 1829. Guthrie secured private funds and completed the canal in late 1830. Within a few years, however, steamboats became too wide for the canal, and it became more of an impediment than an aid.[12]

Guthrie was elected to represent Jefferson County as a Democrat to the Kentucky House of Representatives in 1827.[13] In his first year, he chaired the Internal Improvements Committee.[14] In this capacity, he promoted construction of a number of roads and canals, as well as a railroad connecting Louisville to Frankfort.[15] For the balance of his career in the House, he chaired the Committee on the Courts of Justice.[14]

In 1828, Guthrie mustered enough support to secure city status for Louisville; it was the first time a town in Kentucky had achieved city status.[11] He was elected to the new city council, and quickly became chair of its most powerful committee, the finance committee.[11]

Guthrie served in the House until 1831, when he was elected to the Kentucky Senate.[6] He was twice chosen President Pro Tempore of that body.[15] He served on the Finance and Education Committees.[16] In 1834, he helped found the State Bank of Kentucky, and served as one of its directors.[3] He unsuccessfully ran for a seat in the U.S. Senate in 1835.[6]

Back in Louisville, Guthrie called for the construction of a new building to house both city and county government offices. Secretly, he hoped Kentucky's capital would be moved to Louisville and the building would become the state's capitol building, but the courthouse and two other projects proposed by Guthrie—a water works and a bridge over the Ohio River connection Louisville to Indiana—were halted by the Panic of 1837. The unfinished courthouse came to be known as "Guthrie's Folly", but was still touted in an attempt to bring the capital to Louisville in 1842. All three projects were eventually completed, and Guthrie's Folly became the Jefferson County Courthouse.[17]

Among the other projects Guthrie promoted were the creation of a Board of Health and free public schools in Louisville. He encouraged the city to purchase the turnpike between Louisville and Portland (a town now absorbed by the city of Louisville) and to purchase stock in the Louisville and Ohio Railroad. He also convinced the city to buy the land that would become Cave Hill Cemetery, his final resting place. Guthrie served on the Louisville City Council until 1839.[16] In 1845, he was a delegate to a convention on internal improvements held in Memphis, Tennessee and chaired by John C. Calhoun.[20]

Guthrie represented Louisville at the Kentucky Constitutional Convention of 1849.[16] The delegates chose him president over Whig Archibald Dixon.[21] The major question of the convention was slavery. Guthrie was an advocate of slavery, and believed that, if freed, the slaves would become vicious and ungovernable.[16] The Kentucky Constitution of 1850 included protections for slave property, and stipulated that no amendments to the constitution could be proposed for a period of eight years.[16] 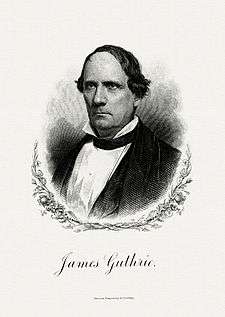 Bureau of Engraving and Printing portrait of Guthrie as Secretary of the Treasury.

President Franklin Pierce recognized Guthrie's financial acumen and appointed him Secretary of the Treasury in 1853.[7] Soon, he became the most influential member of Pierce's cabinet.[7] A hard money Democrat, Guthrie was opposed to a national bank and to the issuance of small distinctive notes by free and charter banks.[22] He advocated for the adoption of a universal currency that would be convertible to gold on demand.[22] In his first report, he was critical of his predecessor, Thomas Corwin, because he made private arrangements for debt repurchases.[22] He also accused Corwin of conspiring with a New York port master to under-report duties collected and deposit them into a trust.[15] Guthrie caused a brief public uproar by removing the port master from his post.[15]

During Guthrie's tenure, the treasury had large budget surpluses due to the discovery of gold in California.[15] He used much of these surpluses to pay down the national debt, which shrank from $63 million in 1853 to $25 million in 1857.[15] He also purchased silver bullion for coinage which aided struggling banks by returning money to circulation and increasing their depleted reserves.[23] He encouraged more efficient processes in the Treasury Department as a whole, and required monthly, rather than quarterly, reports from customs agents.[23] In 1853, he employed Captain Alexander Bowman of the U.S. Army Corps of Engineers to begin construction of an extension to the Treasury Building's south wing.[23] Many considered Guthrie to be the ablest Secretary of the Treasury since Alexander Hamilton.[7]

At the close of President Pierce's term, Guthrie returned to Louisville to serve as vice-president of struggling the Louisville & Nashville Railroad.[1] He ensured that the link between the two cities was complete in 1859, and in 1860, he succeeded John L. Helm as president of the railroad.[24] He would continue in his capacity as president through the Civil War, being succeeded only just before his death in 1869 by Russell Houston.[25]

Kentucky delegates to the 1860 Democratic National Convention in Charleston, South Carolina favored Guthrie for the office of President.[3] A two-thirds majority of delegates was required to secure the nomination.[26] On the first of many ballots, Guthrie received 35 votes; by the thirty-sixth, he was up to 65.5, but still trailed the leading vote-getter Stephen Douglas, by 86 votes.[26] With no candidate able to secure the needed votes, the meeting adjourned and reconvened in Baltimore, Maryland a month later.[26]

At the Baltimore meeting, Guthrie garnered 10 votes on the first ballot.[27] He received 5.5 on the second ballot, which finally saw Douglas attain the necessary majority.[27] Douglas was defeated by Abraham Lincoln in the presidential election. Guthrie was offered the job of Secretary of War by President Lincoln, but he declined because of age and failing health.[3]

In the Civil War

Though a slave holder and states' rights advocate, Guthrie ardently opposed secession.[28] On this topic, he stated "I hate that word secession, because it is a cheat! Call things by their right names! The Southern States have... originated a revolution."[1] He was not convinced that Lincoln's election was an inescapable harbinger of war. He believed the Southern states, if they did not secede, would control Congress and the judiciary, and render Lincoln powerless to impose his agenda upon them.[29]

At age 70, Guthrie was elected as one of Kentucky's six delegates to the Peace Conference of 1861 in Washington, D.C. to devise means to prevent the impending Civil War.[1] He was chosen to chair the conference's Compromise Committee.[29] He failed in his attempt to re-work and re-introduce the Crittenden Compromise earlier proposed in Congress by fellow Kentuckian John J. Crittenden.[29]

The Compromise Committee proposed a plan that included seven constitutional amendments and relied on Henry Clay's Missouri Compromise as a framework. Under the committee's proposal, 36°30' north latitude would continue to divide slave and free territory in the United States, and no more territory would be annexed except with the consent of equal representation from both slave and free states. The delegates to the convention presented this idea to Congress on February 27, 1861 and asked them to call a national convention to consider the question, but Congress rejected this report.[29]

Guthrie personally appealed to President Lincoln to consider the convention's report, but to no avail. Still convinced that war could be averted, he participated in a convention of border states held at Frankfort in May 1861. This convention also failed to avert the war.[29]

During the war, Guthrie's Louisville and Nashville railroad was of vital importance. It was the only rail line originating in the North and terminating in the South. Early in the war, the line was used to transport supplies to the Confederates in Tennessee, but after 1861, it was used primarily to benefit the Union. Despite pressure to relinquish control to the federal government, Guthrie remained president of the railroad, which became a frequent target for guerrilla attacks. Combining earnings from both passenger and military rates, Guthrie ensured that the line's infrastructure at the close of the war was superior to what it had been before the war started.[29]

Guthrie was a delegate to the 1864 Democratic National Convention in Chicago, Illinois.[3] He voted for the ticket of General George B. McClellan and former Kentucky governor Thomas Bramlette for president and vice-president, respectively.[16] At the convention, he also opposed the Wade-Davis Bill.[16]

The Kentucky Senate narrowly chose Guthrie over fellow Louisvillian Lovell H. Rousseau for a seat in the U.S. Senate in 1865.[29] In that body, he opposed the Republican Party's Reconstruction efforts.[30] A supporter of President Andrew Johnson, he opposed the Freedmen's Bureau and the passage of the Fourteenth Amendment.[29]

On February 7, 1868, Guthrie resigned his position due to ill health.[6] He suffered a stroke on April 8, 1868 which left him paralyzed and bedridden for the rest of his life.[16][31] On June 11, 1868, he resigned as president of the Louisville and Nashville Railroad, recommending General William Tecumseh Sherman to be his successor.[7][9]

Guthrie died in Louisville on March 13, 1869 and was buried in Cave Hill Cemetery.[6] The city of Guthrie, Kentucky and Guthrie Street in Downtown Louisville are named in his honor.[32]