Lot Myrick Morrill (May 3, 1813 – January 10, 1883) was an American statesman who served as the 28th Governor of Maine, in the United States Senate and as Secretary of the Treasury appointed by President Ulysses S. Grant. Morrill was an accomplished politician serving several elected and appointed offices throughout his lifetime. Morrill, as Secretary of Treasury, was devoted to hard currency rather than paper money and dedicated himself to serve the public good rather than party interests.[1] Morrill was popularly received as Treasury Secretary in the American press and Wall Street, known for his financial and political integrity. Morrill was President Grant's fourth and last U.S. Secretary of the Treasury.

A native of Maine, Morrill was educated in public school and after briefly attending Waterville College served as principal of a private school in New York. He studied law and passed the bar in 1839, afterwards setting up law practices in Readfield and Augusta, Maine. Morrill, known for his eloquent speaking, soon become popular among Democrat friends advocating temperance. Morrill was elected Maine's House of Representatives in 1854 as a Democrat and served as Chairman of the Maine's Democratic Party. However, as the nation divided over slavery during the 1850s, Morrill's politics changed and he went over to the Republican Party opposed to the expansion of slavery. He was elected Maine's state senator in 1856 as a Republican, and elected Governor of Maine in 1858, serving until 1861 during the outbreak of the American Civil War. Morrill was elected Maine's U.S. Senator in 1861 when a vacancy was opened in the U.S. Senate, after Sen. Hannibal Hamlin assumed the office of Vice President under President Abraham Lincoln. Morrill's extended tenure for almost 15 years as U.S. Senator took place during the Civil War and Reconstruction. Morrill sponsored legislation that outlawed slavery in Washington D.C. and advocated education and suffrage for African American freedman.

In 1876, Sen. Morrill was appointed U.S. Secretary of the Treasury by President Grant to fill in a vancancy after Sec. Benjamin Bristow resigned from office. His political rival James G. Blaine was appointed Maine's Senator after Morrill had resigned from the Senate and accepted the position of Secretary of Treasury. Morrill's tenure was less than a year. Upon his retirement from the Treasury Department, President Rutherford B. Hayes appointed Morrill to the Collector of Customs in Portland, Maine, where he held this position until his death in 1883.

Lot M. Morrill was born on May 3, 1813 in Belgrade, Maine to Peaslee and Nancy (Macomber) Morrill.[2] The Morrill family was very large; Lot having been one of 14 children. His older brother Anson P. Morrill was a prominent U.S. statesman. After attending common school, Morrill taught at a local academy to earn money to go to college. At the age of 18, Morrill attended Waterville College.[2] After briefly attending Waterville, Morrill served as principal of a private western New York college for a year. Morrill returned to Maine and studied law under Justice Fuller in Readfield.[2] Morrill passed the bar in 1839, and built up a successful law practice. At this time Morrill began to associate with the Democratic Party and was popular speaker among his Democratic friends.[2]

Morrill entered politics as a speaker for early temperance movement in Maine and other political movements. In 1841, having become locally famous, Morrill moved to Augusta, Maine where he spoke in front of Maine's capital legislative committees.[2] As a speaker, Morrill gained much experience in state politics. Morrill started a law practice in Augusta; his partners were James W. Bradbury and Richard D. Rice. In 1849, Morrill became Chairman of Maine's Democratic Party and served in this position until 1856.[2] As a Democrat, Morrill was elected to Maine's House of Repusentatives in 1854.[2] Morrill began to break from his party's platform starting in 1855 eventually changing over to the Republican Party; having opposed Democratic concessions to slave states.[2] During the Presidential election of 1856, Morrill believed James Buchanan was a good candidate, however he stated the Democratic Party's platform was "a flagrant outrage upon the country and an insult to the North."[2] Morrill's change of political views were shared by his brother, Anson P. Morrill, and his friend and future Vice President Hannibal Hamlin.[2] Morrill, completely severed ties with the Democratic Party and formally became a Republican in 1856.[2] As a member of the Republican Party, Morrill was elected a Maine state senator in 1856, serving as Senate President. He was the first Republican to hold the position which would be held by Republicans until 1964, with one brief exception. He was elected Governor of Maine in 1858.[2] (His brother Anson P. Morrill also served as Maine's governor.) Morrill served as Maine's governor until January 1861 when he was elected to the U.S. Senate to replace Hannibal Hamlin, who had left his seat to become Abraham Lincoln's running mate.[2]

Morrill came into the U.S. Senate at a pivotal moment in history before the American Civil War. In 1861, Sen. Morrill argued strongly against compromise on the principles of slavery (via Constitutional Amendments) in order to restore the peace.[3] In February 1861, Morrill attended the Peace Conference of 1861 and opposed John J. Crittenden's compromise arguments, similar to those made in the Crittenden Compromise.[2] In March 1862, Morrill supported legislation that permitted the freedom of confiscated Confederate slaves captured during the War. Morrill believed this would be an effective military weapon against the Southern rebellion.[2] In April 1862, Morrill spoke in favor of a bill that passed Congress; signed into law by President Abraham Lincoln that freed slaves in Washington, D.C.[2] By the end of the war, he argued against punishing the southern states for the rebellion, and in favor of higher education for people of all races.[3]

During the Reconstruction Era, Sen. Morrill forcefully advocated Congressional Reconstruction that authorized the U.S. military in Southern sections of the United States to protect African American citizens.[2] In June 1866, Morrill supported suffrage for African Americans in Washington D.C. In 1868, Morrill voted for the impeachment of President Andrew Johnson; the other Senator from Maine, William P. Fessenden, voted for Johnson's acquittal.[2] In 1869, Morrill was defeated by his rival Hannibal Hamlin to the office of U.S. Senator from Maine by one vote. However, after Sen. Fessenden died in office in 1869, Morrill was appointed to replace Fessendon to serve out Fessenden's expired term. Morrill was elected to finish the term in 1871 and served until he was appointed Secretary of the Treasury in 1876 by President Ulysses S. Grant.[2] 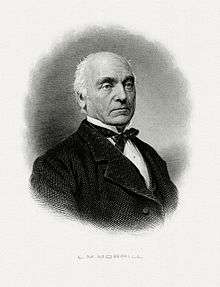 Bureau of Engraving and Printing portrait of Morrill as Secretary of the Treasury.

Morrill was appointed Treasury Secretary by President Ulysses S. Grant; having served from 1876 to 1877 and for five days under President Rutherford B. Hayes. His appointment was in part due to the resignation of previous reformer Sec. Benjamin Bristow who successfully prosecuted and shut down the notorious Whiskey Ring scandal. Bristow resigned due to friction between himself and President Grant over Bristow's zealous reforming in the Treasury Department and potential Presidential run in 1876. Sec. Morrill, upon his assumption to office, was in charge of all the top secret and confidential files left over during Bristow's Whiskey Ring prosecutions. Although Sec. Morrill did not have the reputation of a financial authority, he was believed to have political integrity and it was thought he would run the department as well as George S. Boutwell, Grant's first Treasury Secretary.[1] Morrill upon his appointment submission by President Grant was immediately approved by the Senate without question.[4] Morrill's appointment was popularly received by the press and Wall Street.[4] Morrill's resignation from the Senate caused a vacancy which Gov. Seldon Connor filled by appointing Morrill's rival James G. Blaine as Maine's Senator.

During Sec. Morrill's tenor in office there was debate over currency being redeemed by gold rather than issuing inflationary greenback paper currency. Like his predecessor Sec. Bristow, Morrill advocated the gold standard having viewed paper money was "irredeemable and inconvertible" and "essentially repugnant to the principles of the Constitution."[5] Paper money, however was popular in the South and West, where cheap capital was necessary for economic expansion.[5] Sec. Morrill advised Congress the Treasury's gold supply needed to be increased in anticipation of gold backed currency in 1879, according to the 1875 Resumption of Species Act, that reduced the number of paper notes to $300,000,000.[5]

Following his term in the Grant Administration, he returned to Maine and became Collector of Customs for the Port of Portland, Maine.

He died in Augusta, Maine, leaving his wife Charlotte and four daughters. He was interred at Forest Grove Cemetery in that city.[6] His Augusta home is listed on the National Register of Historic Places.

"I admit that this species of legislation Civil Rights Act of 1866 is absolutely revolutionary. But are we not in the midst of a revolution? Is the Senator from Kentucky utterly oblivious to the grand results of four years of war? Are we not in the midst of a civil and political revolution which has changed the fundamental principles of our government in some respects? ... There was a civilization based on servitude.... Where is that? ... Gone forever.... We have revolutionized this Constitution of ours to that extent and every substantial change in the fundamental constitution of a country is a revolution.