For the California entrepreneur, see William A. Richardson.

This article is about the United States Secretary of the Treasury. For the Illinois senator, see William Alexander Richardson.

William Adams Richardson (November 2, 1821 – October 19, 1896) was the 29th U.S. Secretary of Treasury and federal jurist. Richardson, appointed Secretary of Treasury by President Ulysses S. Grant served from 1873 to 1874. During Richardson's tenure the Panic of 1873 swept the nation and caused a depression that lasted five years. Richardson responded by controversially releasing $26,000,000 in paper money reserves in an inflationist measure to help alleviate the effects of the general panic. There was debate whether Richardson had the authority to do so, however, Congress had not passed a law to forbid such an action. Richardson secured the $15,000,000 award from the Alabama Claims through the retirement of United States bonds held in Europe. This was to ensure that no gold had to be transferred overseas by ship. Richardson's tenure was marred by the Sanborn Incident, which involved favoritism and profiteering in the collection of unpaid taxes. Pressure mounted for Richardson to be removed; he tendered his resignation, which President Grant accepted. As a face-saving gesture, Grant then appointed Richardson as a Judge on the United States Court of Claims; Richardson remained on the bench for the rest of his life.

Richardson studied at Pinkerton Academy and Lawrence Academy at Groton. Richardson then studied and graduated from Harvard University in 1843.[2] He earned his LL.B. from Harvard Law School and passed the bar in July 1846.[3][1] Richardson entered partnership and practiced law with his older brother Daniel Samuel who had a large practice in Lowell. [1] As the junior law partner Richardson was considered to be a painstaking methodical office attorney. [1]

He was president of the Common Council of Lowell 1853-1854, of the Wameset Bank, and of the Mechanics' Association. He was appointed to revise the statutes of Massachusetts in 1855, and subsequently chosen by the legislature to edit the annual supplements of the general statutes, which he continued to do for 22 years. He became judge of probate in 1856, and was judge of probate and insolvency from 1858 until 1872. He was an overseer of Harvard 1863-1875.[4] 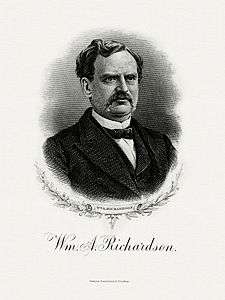 Bureau of Engraving and Printing portrait of Richardson as Secretary of the Treasury.

The post-war economy had expanded so quickly that commercial banks became nervous and began calling in their loans. As a result, in the summer of 1873 the money supply tightened drastically, causing the Panic of 1873. Richardson responded by issuing $26 million in greenbacks to meet the demand. The legality of his action was doubtful, but the Congress did not interfere and the crisis was eased. Such cycles of expansion and panic continued for the next thirty years, however, and were the basis for the creation of the Federal Reserve in 1913.

In his last months in office Richardson became embroiled in the "Sanborn incident."

Richardson was pressured to leave office because of the economic downturn and the Sanborn incident. President Grant accepted Richardson's resignation, and as a consolation and a face-saving gesture Grant then appointed Richardson as a Judge on the United States Court of Claims. He became Chief Judge in 1885.[4] He remained on the bench until his death, and was a professor at Georgetown Law School from 1879-1894.[3]

He prepared and edited: