Politics in Georgia play out within a semi-presidential representative democratic republic with a multi-party system, and with the President as the head of state and the Prime Minister as the head of the Georgian Government.[1] The President of the Republic and the government wield executive power. Legislative power is vested both in the government and in the Parliament. After the Rose Revolution of 2003, the National Movement - Democrats dominated the party system. Georgia became a democratic republic following the first multiparty, democratic parliamentary elections of October 28, 1990. The Georgian state is highly centralized, except for the autonomous regions of Abkhazia and Adjara and the former autonomous region of South Ossetia. Abkhazia and South Ossetia, which had autonomy within the Georgian SSR during Soviet rule, each unilaterally seceded from Georgia in the 1990s. While as of 2016 the Georgian government recognizes Abkhazia as autonomous within Georgia, it does not recognize South Ossetia as having any special status.

Consideration of replacing Georgia's republic with some form of constitutional monarchy has become part of Georgian political debate since the Georgian Orthodox primate and other leading Georgians suggested the idea in 2007.[2][3]

Following a crisis involving allegations of ballot fraud in the 2003 parliamentary elections, Eduard Shevardnadze resigned as president on November 23, 2003, in the bloodless Rose Revolution. The interim president was the speaker of the outgoing parliament (whose replacement was annulled), Nino Burjanadze. On January 4, 2004 Mikheil Saakashvili, leader of the United National Movement won the country's presidential election and was inaugurated on January 25.

Fresh parliamentary elections were held on March 28, 2004, where the United National Movement's parliamentary faction, the National Movement - Democrats (NMD), secured the vast majority of the seats (with ca. 75% of the votes). Only one other party reached the 7% threshold: the Rightist Opposition with ca. 7.5%. The vote is believed to have been one of the freest ever held in independent Georgia although an upsurge of tension between the central government and the Ajarian leader Aslan Abashidze affected the elections in this region. Despite recognizing progress the Organization for Security and Co-operation in Europe noted the tendency to misuse state administration resources in favor of the ruling party.[4]

Tensions between Georgia and separatist authorities in Ajaria increased after the elections, climaxing on May 1, 2004 when Abashidze responded to military maneuvers held by Georgia near the region by having the three bridges connecting Ajaria and the rest of Georgia over the Choloki River blown up. On May 5, Abashidze was forced to flee Georgia as mass demonstrations in Batumi called for his resignation and Russia increased their pressure by deploying Security Council secretary Igor Ivanov. 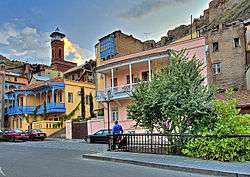 Old Tbilisi showing a mosque and minaret in the background

Under the Saakasvili administration Georgia has achieved considerable progress in eradicating corruption. In 2008 Transparency International ranked Georgia 67th in its Corruption Perceptions Index, with a score of 3.9 points out of 10 possible.[5] This represents the best result among the CIS countries and a dramatic improvement on Georgia's score in 2004, when the country was ranked 133rd with 2.0 points.[6]

In January 2006 a new party, Georgia's Way, was created. The movement is led by former Foreign Minister Salome Zourabichvili, and appears to be relatively popular. An opinion poll conducted by the Georgian weekly Kviris Palitra and published on April 10, 2006 suggested that Salome Zourabichvili would garner 23.1% of votes if a presidential election were held today. President Saakashvili ranked first with 33% - an all-time low for the Georgian President - whilst no other individual managed to surpass double-digit levels of support. Georgia's Way has said it intends to have candidates for all the seats in Georgia's upcoming local elections, with Zourabichvili hoping to become Tbilisi Mayor.

On November 7, 2007, during a period of mass protests, President Saakashvili declared Tbilisi to be in a state of emergency. There were massive demonstrations and protests by the civil opposition, demanding the resignation of President Saakashvili. The Georgian police used teargas, batons, water cannons and high tech acoustic weapons in the streets of Tbilisi. Later that day, the President declared a state of emergency in the whole country of Georgia. The Russian government denied accusations of being involved or of interfering in the situation. President Saakashvili rejected all demands that he resign his position, but announced early presidential elections to be held in January 2008, effectively cutting his term in office by a year.

President Saakashvili invited Vladimer ("Lado") Gurgenidze, MBA holder from Emory University, United States and former business executive, to succeed Noghaideli on the position of the PM on the same day. Gurgenidze was formally approved on the position and granted the trust of the Parliament of Georgia on November 22, 2007. Gurgenidze implemented only two changes in the Cabinet of Georgia so far, replacing Alexandre Lomaia, the former Minister for Education and Science and new Secretary of National Security Council with Maia Miminoshvili, former Head of the National Assessment and Examination Centre (NAEC). Prime Minister also invited Koba Subeliani, former Head of Municipal Accomplishment Service to succeed Giorgi Kheviashvili, former Minister for Refugees and Accommodation. New Prime Minister and two Ministers Koba Subeliani and Maia Miminoshvili were approved on their positions on November 22, 2007 by a confidence vote of the Parliament of Georgia.

Mikheil Saakashvili resigned from the position of the President on November 25, 2007 as the Constitution of Georgia requires the president stands down at least 45 days before the next election to be eligible for retaking part him/herself. The Speaker of the Parliament of Georgia Mrs. Nino Burjanadze took over the position until the results were announced on January 5, 2008.

Debate on the possible installation of a constitutional monarchy in Georgia was revitalized following the 7 October 2007 sermon of Catholicos-Patriarch Ilia II, the popular head of the Georgian Orthodox Church. The patriarch said, during his Sunday service at the Cathedral of the Holy Trinity, that restoration of the Bragrationi royal family was a "desirable dream of the Georgian people". He also emphasized that if the people of Georgia chose this model of governance, "a candidate to the crown should be selected among representatives of the royal dynasty, and he should be suitably raised to be king from childhood."[2][3]

Competition arose among the old dynasty's princes and supporters, as historians and jurists debated which Bagrationi has the strongest hereditary right to a throne that has been vacant for two centuries.[7] Although some Georgian monarchists support the Gruzinsky branch's claim, others support that of the re-patriated Mukhrani branch. Both branches descend in unbroken, legitimate male line from the medieval kings of Georgia down to Constantine II of Georgia who died in 1505.

David Bagration of Mukhrani, married Ana Bagration-Gruzinsky on 8 February 2009 at the Tbilisi Sameba Cathedral.[8] The marriage united the Gruzinsky and Mukhrani branches of the former Georgian royal family, and drew a crowd of 3,000 spectators, officials, and foreign diplomats, as well as extensive coverage by the Georgian media.[7]

After the Rose Revolution Georgia started looking westwards. The government — with public support — aims at EU and NATO membership, and has created a Ministry for European and Euro-Atlantic Integration.[9] Within NATO, Georgia is currently in Intensified Dialogue; membership in the EU is a more distant project.

The Abkhaz separatist dispute absorbs much of the government's attention. While a cease-fire is in effect about 250,000 internally displaced persons (IDPs) who were driven from their homes during the conflict, constitute a vocal lobby. The government has offered the region considerable autonomy to encourage a settlement that would allow the IDPs (mainly ethnic Georgians from the Gali district) to return home, however the Abkhaz side refused to accept it.

Currently, Russian peacekeepers[10] are stationed in Abkhazia under the authority of the Commonwealth of Independent States, along with United Nations observers but both groups have recently had to restrict their activities due to increased mining and guerrilla . So far (by 2007) the negotiations have not resulted in any settlement. France, United Kingdom, Germany, Russia and the United States (who act as the members of the United Nations and the OSCE) continue to encourage a comprehensive settlement consistent with Georgian independence, sovereignty, and territorial integrity. The UN observer force and other organizations are quietly encouraging grassroots cooperative and confidence-building measures in the region.

The parliament has instituted wideranging political reforms supportive of higher human rights standards, because between 1992 and 2003 (before the Rose Revolution of November 23, 2003) the Georgian human rights situation had been complicated. Despite the reforms by the new government, there are still numerous problems concerning respect for human rights in the country. Prisoners are frequently maltreated, journalists are intimidated by the authorities and much of the mainstream media is owned by government supporters. The police are often accused of planting evidence, beatings and the unnecessary killing of suspects.

The head of state is the President, who is elected for a term of five years. His constitutional successor is the Chairman of the Parliament speaker of parliament. The president appoints a Prime Minister, who serves as the head of government.

The Parliament of Georgia (Sak'art'velos Parlamenti), also known as the Umaghlesi Sabcho (Supreme Council), has 235 members, elected for a four-year term - 150 seats by proportional representation, 75 in single-seat constituencies and 10 given to the representatives of the displaced persons from the separatist region of Abkhazia. However, this situation will change when the next elections are held (likely to be 2008). According to the constitutional amendments passed in 2003 the parliament will consist of only 150 members elected with the proportional representation system and will be fully refurbished.

The Speaker of Parliament is Davit Usupashvili.

Georgia has a Supreme Court, with judges elected by the Parliament on the president's recommendation, and a Constitutional Court.

The regions and autonomous republics are subdivided into 67 municipalities (Georgian: მუნიციპალიტეტი; before 2006 - raioni, Georgian: რაიონი) and cities with local government: