Politics in Norway take place in the framework of a parliamentary representative democratic constitutional monarchy. Executive power is exercised by the King's council, the cabinet, led by the Prime Minister of Norway. Legislative power is vested in both the government and the Storting, elected within a multi-party system. The Judiciary is independent of the executive branch and the legislature.

The Norwegian constitution, signed by the Eidsvoll assembly on 17 May 1814, transformed Norway from being an absolute monarchy into a constitutional monarchy. The 1814 constitution granted rights such as freedom of speech (§100) and rule of law (§§ 96, 97, 99). Important amendments include: 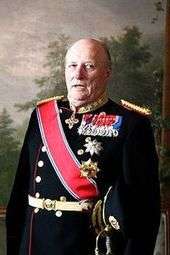 Harald V has been King of Norway since 1991. The Norwegian king has mainly symbolic powers.

Erna Solberg, Prime Minister of Norway (2013-) and leader of the Conservative Party.

Norway is a constitutional monarchy, where the King has a mainly symbolic power. The Royal House is a branch of the princely family of Glücksburg, originally from Schleswig-Holstein in Germany. The functions of the King, Harald V, are mainly ceremonial, but he has influence as the symbol of national unity. Although the constitution of 1814 grants important executive powers to the King, these are always exercised by the Council of State in the name of the King (King's Council, or cabinet). The King is also High Protector of the Church of Norway (the state church), Grand Master of The Royal Norwegian Order of St. Olav, and symbolically Supreme Commander of the Norwegian armed forces.

The Council of State is formally convened by the reigning monarch. The Council of State consists of a Prime Minister and his/her council, formally appointed by the King. Parliamentarism has evolved since 1884 and entails that the cabinet must not have the parliament against it, and that the appointment by the King is a formality. The council must have the confidence of the Norwegian legislative body, known as the Storting. In practice, the monarch will ask the leader of a parliamentary block that has a majority in the Storting to form a government. After elections resulting in no clear majority to any party or coalition, the leader of the party most likely to be able to form a government is appointed Prime Minister. Since World War II, most non-Socialist governments have been coalitions, and Labour Party governments have often relied on the support of other parties to retain the necessary parliamentary votes.

The executive branch is divided into the following Ministries:

The Labour Party has been the largest party in Parliament ever since the election of 1927 up to the recent 2009 election. Labour formed their first brief minority government in 1928 which lasted for 18 days only. After the 1936 election the Labour Party formed a new minority government, which had to go into exile 1940–45 because of the German occupation of Norway. After a brief trans-party government following the German capitulation in 1945, Labour gained a majority of the seats in parliament in the first post-war election of 1945. 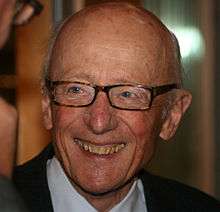 Kåre Willoch (Conservative Party) was Prime Minister from 1981 until 1986.

Conservative leader Kåre Willoch formed a minority government after the election of 1981. In 1983, midway between elections, this government was expanded to a majority three-party coalition of the Conservatives, the Centre Party and the Christian Democrats. In the election of 1985 the coalition lost its majority but stayed in office until 1986, when it stepped down after losing a parliamentary vote on petrol taxes.

Labour leader Gro Harlem Brundtland served three periods as Prime Minister. First briefly from February 1981 until the election the same year, then from May 1986 to the election of 1989, and last from November 1990 until October 1996 when she decided to step out of domestic politics. Brundtland strongly influenced Norwegian politics and society during this period and was nicknamed the "national mother".

After the election of 1989 a centre-right coalition was formed with the same three parties as in 1983–1986, this time headed by Conservative leader Jan P. Syse. This coalition governed from 1989 to November 1990 when it collapsed from inside over the issue of Norwegian membership in the European Economic Area. 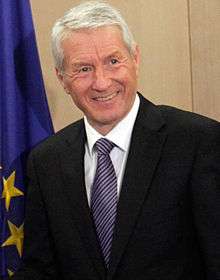 Thorbjørn Jagland (Labour) was Prime Minister 1996–97. He has later become Secretary General of the Council of Europe.

When Brundtland resigned in 1996, Labour leader Thorbjørn Jagland formed a new Labour government that stayed in office until October 1997 when he, after the September 1997 election, declared that his government would step down because the Labour Party failed to win at least 36.9% of the national vote – the percentage Labour had won in the 1993 election.

A three-party minority coalition of the Centre, Christian Democratic, and Liberal parties, headed by Christian Democrat Prime Minister Kjell Magne Bondevik, moved into office in October 1997. That government fell in March 2000 over the issue of proposed natural gas plants, opposed by Bondevik due to their impact on climate change.

The Labour Party's Jens Stoltenberg, a Brundtland protégé, took over in a minority Labour government but lost power in the September 2001 election when Labour posted its worst performance since World War I.

Bondevik once again became Prime Minister in 2001, this time as head of a minority coalition of the Conservatives, Christian Democrats and Liberals, a coalition dependent on support from the Progress Party. This coalition government was the first to stay in office for a complete four-year election period since Per Borten's coalition government of 1965–69.

A coalition between the Labour Party, Socialist Left Party, and Centre Party, took over from 17 October 2005 after the 2005 general election, where this coalition obtained a majority of 87 out of 169 seats in the Storting. Jens Stoltenberg became Prime Minister and formed a cabinet known as Stoltenberg's Second Cabinet.

In the 2009 general election the coalition parties kept the majority in the Storting by winning 86 out of 169 seats.[1] Stoltenberg's second cabinet thus continued. There have been several reshuffles in the cabinet during its existence.

In the 2013 election, the incumbent red–green coalition government obtained 72 seats and lost its majority. The election ended with a victory for the four opposition non-socialist parties, winning a total of 96 seats out of 169 (85 needed for a majority). Following convention, Stoltenberg's government resigned and handed over power in October 2013. The Labour Party, however, remained the largest party in parliament with 30.8% of the popular vote. The Progress Party also lost ground, but nevertheless participates in the new cabinet. Among the smaller parties, the centrist Liberal Party and Christian Peoples Party hold the balance of power. Both campaigned on a change in government. On September 30 the two smaller parties announced that they would support a minority coalition of the Conservative and Progress parties, but they would not take seats in the cabinet themselves.

Norway has a unicameral Parliament, the Storting ("Great Council"), with members elected by popular vote for a four-year term (during which it may not be dissolved) by proportional representation in multi-member constituencies. Voting rights are granted in the year a person turns 18. 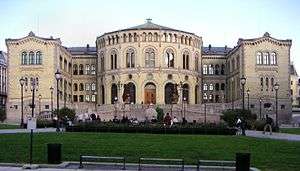 The Storting currently has 169 members (increased from 165, effective from the elections of 12 September 2005). The members are elected from the 19 counties for 4-year terms according to a system of proportional representation. Until 2009, the Storting divided itself into two chambers, the Odelsting and the Lagting for the sole purpose of voting on legislation. Laws were proposed by the government through a Member of the Council of State or by a member of the Odelsting and decided on by the Odelsting and Lagting, in case of repeated disagreement by the joint Storting. In practice, the Lagting rarely disagreed and mainly just rubber-stamped the Odelsting's decision. In February 2007, the Storting passed a constitutional amendment to repeal the division, which abolished the Lagting for the 2009 general election, thereby establishing a fully unicameral system.[2]

Elections are to be held every 4 years on the second Monday of September. 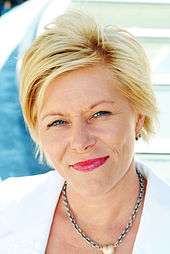 Siv Jensen, Minister of Finance (2013-) and leader of the Progress Party. 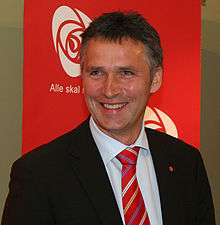 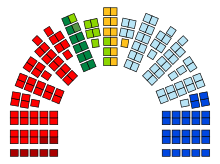 The special High Court of the Realm (Riksrett) hears impeachment cases against members of the Government, Parliament, or Supreme Court. Following an amendment to the Norwegian constitution in February 2007, impeachment cases are heard by the five highest ranking Supreme Court justices and six lay members in one of the Supreme Court courtrooms The High Court of the Realm had generally lost most of its significance after 1884, and this institution has been passive ever since 1927. The new system is meant to restore the Riksrett to its earlier significance.

Impeachment may be brought against Members of the Council of State, or of the Supreme Court or of the Storting, for criminal offenses which they may have committed in their official capacity. Indictments are raised by the Storting and judged by five Supreme Court justices and six lay judges

Counties and municipalities have local autonomy, but this autonomy is circumscribed by national controls. Counties and municipalities are subject to the oversight of a governor (fylkesmann) appointed by the King in the Council of State. One governor exercises authority in both Oslo and the adjacent county of Akershus. Each county has a directly elected county assembly, led by a mayor, which decides upon matters falling within purview of the counties (upper secondary and vocational education, some culture, transport and social services). There is also a governor (sysselmann) on Svalbard, who is under the Ministry of Foreign Affairs and not the Ministry of Local Government and Regional Development as the other counties.

The counties are divided into 428 municipalities (kommuner, singular kommune). The municipalities are led by directly elected assemblies, which elect a board of aldermen and a mayor. Some municipalities, most notably Oslo, have a parliamentary system of government, where the city council elects a city government that is responsible for executive functions. Some municipalities are also divided into municipal districts or city districts (again, Oslo is one of these) responsible for certain welfare and culture services. These districts are also headed by political assemblies, in some cases elected directly by the citizens. The municipalities deal with a wide range of planning issues and welfare services, and are mostly free to engage in activities which are not explicitly restricted by law. Lately, the functions of the counties and municipalities have been the subject of debates, and changes may take place in the near future.

Norway has three dependent areas, all in or near Antarctica: Bouvet Island in the South Atlantic Ocean, Queen Maud Land in Antarctica, and Peter I Island off West Antarctica. The Norwegian Act of 27 February 1930 declares these areas are subject to Norwegian sovereignty as dependencies.

An attempt to annex East Greenland ended in defeat at the Hague Tribunal in 1933.