Politics of Lithuania takes place in a framework of a unitary semi-presidential representative democratic republic,[1][2][3][4] whereby the Prime Minister of Lithuania is the head of government, and of a multi-party system.

Executive power is exercised by the President and the Government, which is headed by the Prime Minister. Legislative power is vested in both the government and the unicameral Seimas (Lithuanian Parliament). Judicial power is vested in judges appointed by the President of Lithuania and is independent of executive and legislature power. The judiciary consists of the Constitutional Court, the Supreme Court, and the Court of Appeal as well as the separate administrative courts. The Constitution of the Republic of Lithuania established these powers upon its approval on 25 October 1992. Being a multi-party system, the government of Lithuania is not dominated by any single political party, rather it consists of numerous parties that must work with each other to form coalition governments.

Since Lithuania declared independence on 11 March 1990, it has kept strong democratic traditions. Drawing from the interwar experiences, politicians made many different proposals that ranged from strong parliamentarism to a presidential republic with checks and balances similar to the United States. Through compromise, a semi-presidential system was settled.[1] In a referendum on 25 October 1992, the first general vote of the people since their declared independence, 56.75% of the total number of voters supported the new constitution.[5]

All major political parties declared their support for Lithuania's membership in NATO and the European Union (EU). Lithuania joined NATO on 29 March 2004, and joined the EU on 1 May 2004.

Since 1991, Lithuanian voters have shifted from right to left and back again, swinging between the Conservatives, led by Vytautas Landsbergis, and the (formerly Communist) Democratic Labour Party of Lithuania, led by president Algirdas Brazauskas. During this period, the prime minister was Gediminas Vagnorius.

Valdas Adamkus has been the president for most of the time since 1998. His prime minister was Rolandas Paksas, whose government got off to a rocky start and collapsed within seven months. The alternation between left and right was broken in the October 2000 elections when the Liberal Union and New Union parties won the most votes and were able to form a centrist ruling coalition with minor partners. President Adamkus played a key role in bringing the new centrist parties together. Artūras Paulauskas, the leader of the centre-left New Union (also known as the social-liberal party), became the Chairman of the Seimas. In July 2001, the centre-left New Union party forged an alliance with the Social Democratic Party of Lithuania and formed a new cabinet under former president Algirdas Brazauskas. On 11 April 2006, Artūras Paulauskas was removed from his position and Viktoras Muntianas was elected Chairman of the Seimas.[6]

The cabinet of Algirdas Brazauskas resigned on 31 May 2006, as President Valdas Adamkus expressed no confidence in two of the Ministers, formerly party colleagues of Brazauskas, over ethical principles. Brazauskas decided not to remain in office as acting Prime Minister, and announced that he was finally retiring from politics. Even so, he led the ruling Social Democratic Party of Lithuania for one more year, until 19 May 2007, when he passed the reins to Gediminas Kirkilas. On 27 November 2008, Andrius Kubilius was appointed as a Prime Minister. In 2012, Algirdas Butkevičius became the new Prime Minister and still holds that position.

Main article: Government of the Republic of Lithuania

Government in Lithuania is made up of three branches originally envisioned by enlightenment philosopher Baron de Montesquieu: executive, legislative, and judicial. Each branch is separate and is set up to do checks and balances on each other branch.

The executive branch of the Lithuanian government consists of a President, a Prime Minister, and the President's Council of Ministers. It is in charge of running the government.

The President of Lithuania is the head of state of the country, elected directly for a five-year term and can serve maximum of two terms consecutively. The President, with the approval of the Seimas, is first responsible of appointing the Prime Minister. Upon the Prime Minister's nomination, the President also appoints, under the recommendation of the Prime Minister, the Council of Ministers (13 ministries), as well as a number of other top civil servants and the judges for all courts. The President also serves as the commander-in-chief, oversees foreign and security policy, addresses political problems of foreign and domestic affairs, proclaims state of emergency, considers the laws adopted by the Seimas, and performs other duties specified in the Constitution.[7]

Dalia Grybauskaitė has served as the president of Lithuania since July 2009, winning a reelection bid in 2014. Grybauskaitė succeeded Valdas Adamkus who had served a total of two non-consecutive terms. Former President Rolandas Paksas, who had defeated Adamkus in 2003, was impeached in April 2004 for leaking classified information.

The Prime Minister of Lithuania is the head of government of the country, appointed by the President and approved by the Seimas. The Prime Minister, within 15 days of being appointed, is responsible for choosing Ministers for the President to approve to each of the 13 Ministries. In general, the Prime Minister is in charge of the affairs of the country, maintains homeland security, carries out laws and resolutions of the Seimas and decrees of the President, maintains diplomatic relations with foreign countries and international organizations, and performs other duties specified in the Constitution.[7]

Similar to the cabinet of other nations, the Council of Ministers consists of 13 Ministers chosen by the Prime Minister and appointed by the President. Each Minister is responsible for his or her own Ministry of the Lithuanian government and must give reports on his or her Ministry when directed to.[8] When the Prime Minister resigns or dies, the position is to be filled as soon as possible and the new leader will appoint a new Government. 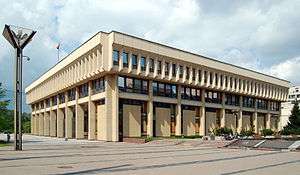 The parliament (Seimas) has 141 members that are elected for a 4-year term. About half of the members are elected in single-member districts (71), and the other half (70) are elected in the nationwide vote using proportional representation by party lists. A party must receive at least 5% of the national vote to be represented in the Seimas.

The judges of the Constitutional Court of the Republic of Lithuania (Lietuvos Respublikos Konstitucinis Teismas) for a single nine-year term are appointed by the Seimas from the candidates presented by the President (three judges), Chairman of Seimas (three judges) and the chairman of the Supreme Court (three judges).

The county governors (Lithuanian: apskrities viršininkas) institution and county administrations have been dissolved in 2010.[10]