The politics of Bulgaria take place in a framework of a parliamentary representative democratic republic,[1] whereby the Prime minister is the head of government, and of a multi-party system.[2] Executive power is exercised by the government. Legislative power is vested in both the government and the National Assembly. The Judiciary is independent of the executive and the legislature.

After 1989, after forty-five years of single party system, Bulgaria had an unstable party system, dominated by democratic parties and opposition to socialists - the Union of Democratic Forces and several personalistic parties and the post-communist Bulgarian Socialist Party or its creatures, which emerged for a short period of time in the past decade, personalistic parties could be seen as the governing Simeon II's NDSV party and Boyko Borisov's GERB party. Today, the president is Rumen Radev

Bulgaria has generally good freedom of speech and human rights records as reported by the US Library of Congress Federal Research Division in 2006,[3] while Freedom House listed it as "free" in 2011, giving it scores of 2 for political rights and 2 for civil liberties.[4] However, in 2014, there is some concern that the proposed new Penal Code would limit freedom of the press and assembly,[5] and as a consequence freedom of speech.

After the fall of the communism in 1989, the former communist party was restructured and succeeded by the Bulgarian Socialist Party (BSP), which won the first post-communist elections for the Constitutional Assembly in 1990 with a small majority. Meanwhile, Zhelyu Zhelev, a communist-era dissident from the new democratic party - Union of Democratic Forces (abbreviated in Bulgarian as SDS), was elected President by the Assembly in 1990. In the first years after the change of regime, Bulgarian politics had to (re)establish the foundations of a democratic society in the country after nearly fifty years of de facto totalitarian communism. The so-called period of transition (from a Soviet socialist model to an economic structure focused on development through economic growth) began in the early 1990s. The politics of Bulgaria was aimed at joining the European Union and the NATO fold, as the alliances were recognised to have political agendas similar to the goals of the new Bulgarian democracy.

In contemporary Bulgaria, the government and its leader - the Prime Minister, have more political influence and significance than the President. Thus, the parliamentary elections set the short-term social and political environment in the country since the cabinet (chosen by the Prime Minister and approved by the parliament) decides how the country is governed while the President can only make suggestions and impose vetoes.

In the first parliamentary elections held under the new constitution of Bulgaria, in October 1991, the Union of Democratic Forces (SDS) party won a plurality of the seats, having won 110 out of the 240 seats, and created a cabinet alone with the support of the Movement for Rights and Freedoms — a liberal party (in Bulgarian abbreviated: DPS) which is widely perceived as a party of the ethnic Turks minority in Bulgaria. Yet, their government collapsed in late 1992, and was succeeded by a technocratic team put forward by the Bulgarian Socialist Party (BSP), which served until 1994 when it also collapsed. The President dissolved the government and appointed a provisional one to serve until early parliamentary elections could be held in December.

BSP won convincingly these elections in December 1994 with a majority of 125 seats out of the 240. Due to the severe economic crisis in Bulgaria during their government, BSP's cabinet collapsed and in 1997 a caretaker cabinet was appointed by the President, again, to serve until early parliamentary elections could be held in April 1997.

The April 1997 elections resulted in a landslide victory for the SDS, winning a majority of 137 seats in parliament, and allowing them to form the next government. This proved to be the first post-communist government that did not collapse and served its full 4-year term until 2001.

In 2001, the former monarch of Bulgaria Simeon Saxe-Coburg-Gotha returned to power, this time as Prime Minister with his National Movement Simeon II (in Bulgarian abbreviated: NDSV), having won half (120) of the seats. His party entered a coalition with the DPS and invited two functionaries of the BSP (who sat as independents). In opposition were the two previously governing parties - the Socialist Party and the Union of Democratic Forces. In the four years in opposition the SDS suffered the defection of numerous splinter groups. The ruling party NDSV itself ruptured into a pro-right core and a pro-liberal fringe group. Bulgarian entered NATO in 2004.

In the aftermath, the BSP won the parliamentary elections in 2005 with 82 out of the 240 seats, but as it didn't get the majority of the seats, a coalition government was formed by the three biggest parties - BSP, NDSV and DPS. The elections also put in parliament some of the right-wing parties, as well as the extreme-right nationalist coalition led by the party Ataka as an answer to the former coalition government of NDSV with DPS. Bulgarian entered the European Union in 2007.

In the parliamentary elections of 2009 the centre-right party of the mayor of Sofia won GERB picking up 117 seats. The party formed a minority government with the support of the right-wing parties. Once the governing party - the National Movement Simeon II did not amass enough votes to enter the parliament. The austerity measures required in the stagnation of the Global Financial Crisis led to massive protests and the resignation of the cabinet in early 2013, months before the end of GERB's term.

In the early elections the former leading party GERB received highest vote from the people. This was the first time since 1989 that a ruling party was re-elected; in the past painful and unpopular reforms had to be implemented. However, as GERB received only 97 of the 240 seats, and failed to make a coalition, they refused the mandate, handing it down to the next party BSP. The socialist party chose the non-party former Minister of Finance Plamen Oresharski to form a cabinet. His cabinet was supported by the BSP and the DPS, opposed by GERB, while Ataka was absent.

Only two weeks after its initial formation the Oresharski government came under criticism and had to deal with large-scale protests some with more than 11 000 participants.[6] One of the main reasons for these protests was the controversial appointment of media mogul Delyan Peevski as a chief of the National Security State Agency.[7] The protests continued over the lifetime of the Oresharski government. In all, the government survived 5 votes of no-confidence before voluntarily resigning.[8] Following an agreement from the three largest parties (GERB, BSP and DPS) to hold early parliamentary elections for 5 October 2014,[9] the cabinet agreed to resign by the end of July,[10] with the resignation of the cabinet becoming a fact on 23 July 2014.[11] The next day parliament voted 180-8 (8 abstained and 44 were absent) to accept the government's resignation.[12] Following the vote, President Plevneliev offered the mandate to GERB to try and form government, but it was refused.[13] The next day the BSP returned the mandate as well.[14] On 30 July, the DPS refused the mandate as well.[15] Finally, on 6 August, a caretaker government led by Georgi Bliznashki was sworn into office and the Oresharski government was officially dissolved.

As agreed, parliamentary elections were held on 5 October 2014 to elect the 43rd National Assembly.[16] GERB remained the largest party, winning 84 of the 240 seats with around a third of the vote. A total of eight parties won seats, the first time since the beginning of democratic elections in 1990 that more than seven parties entered parliament.[17] After being tasked by President Rosen Plevneliev to form a government, Borisov's GERB formed a coalition with the Reformist Bloc,[18][19][20] had a partnership agreement for the support of the Alternative for Bulgarian Revival,[21] and also had the outside support of the Patriotic Front. The cabinet of twenty ministers was approved by a majority of 136-97 (with one abstention).[22] Borisov was then chosen as prime minister by an even larger vote of 149-85.[23] Borisov become the first person to be elected twice as Prime Minister in the recent history of Bulgaria. With the support of the coalition partner (the Reformist Bloc) members of the parties in the Bloc (Democrats for a Strong Bulgaria (DSB), Union of Democratic Forces (SDS), Bulgaria for Citizens Movement (DBG) and Bulgarian Agrarian National Union (BZNS)) were chosen for Minister positions. The vice chairman of the Alternative for Bulgarian Revival party Ivaylo Kalfin was voted for Depute Prime Minister and Minister of Labor and Social Policy.

In 1992 Zhelev won Bulgaria's first presidential elections and served as President until 1997. The second President was another member of the Union of Democratic Forces - Petar Stoyanov, who served until 2002. In 2001 leader of the Bulgarian Socialist Party - Georgi Parvanov defeated Stoyanov and took office in 2002 and served until 2012; becoming the only president to be reelected after his successful 2006 campaign. In 2011 GERB candidate Rosen Plevneliev was elected to serve as President from 2012 until January, 2017.

The president of Bulgaria is directly elected for a 5-year term with the right to one re-election. The president serves as the head of state and commander in chief of the armed forces. The President's main duties are to schedule elections and referendums, represent Bulgaria abroad, conclude international treaties, and head the Consultative Council for National Security. The President may return legislation to the National Assembly for further debate—a kind of veto—but the legislation can be passed again by an absolute majority vote.

The Council of Ministers is the principal organ of the executive branch. It is usually formed by the majority party in Parliament, if one exists, or by the largest party in Parliament along with coalition partners. Chaired by the Prime Minister, it is responsible for carrying out state policy, managing the state budget, and maintaining law and order. The Council must resign if the National Assembly passes a vote of no confidence in the Council or the Prime Minister or rejects a vote of confidence. The current government is a coalition between the left-wing Bulgarian Socialist Party and the liberal Movement for Rights and Freedoms. 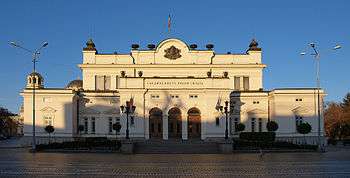 The Bulgarian unicameral parliament, the National Assembly or Narodno Sabranie, consists of 240 deputies who are elected for 4-year-terms by popular vote. The votes are for party or coalition lists of candidates for each of the 28 administrative divisions. A party or coalition must garner a minimum of 4% of the vote in order to enter parliament. Parliament is responsible for enactment of laws, approval of the budget, scheduling of presidential elections, selection and dismissal of the prime minister and other ministers, declaration of war, deployment of troops outside of Bulgaria, and ratification of international treaties and agreements. 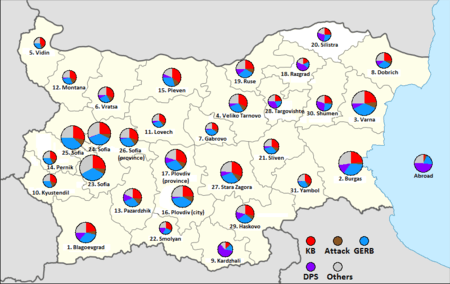 Distribution of votes by constituency

The Bulgarian judicial system consists of regional, district and appeal courts, as well as a Supreme Court of Cassation and one Specialized Criminal Court.[24] In addition, there is a Supreme Administrative Court and a system of military courts. The Presidents of the Supreme Court of Cassation and the Supreme Administrative Court as well as the Prosecutor General are elected by a qualified majority of two-thirds from all the members of the Supreme Judicial Council and are appointed by the President of the Republic. The Supreme Judicial Council is in charge of the self-administration and organisation of the Judiciary.

The Supreme Judicial Council has charge of the self-administration and organization of the Judiciary.

The Constitutional Court of Bulgaria supervises the review of the constitutionality of laws and statutes brought before it, as well as the compliance of these laws with international treaties that the Government has signed. Parliament elects the 12 members of the Constitutional Court by a two-thirds majority. The members serve for a nine-year term.

The territory of the Republic of Bulgaria is divided into provinces and municipalities. In all Bulgaria has 28 provinces, each headed by a provincial governor appointed by the government. In addition, there are 263 municipalities.