Roquebrune-sur-Argens is a commune in the Var department in the Provence-Alpes-Côte d'Azur region in southeastern France.

It lies not far from the cities of Draguignan and Fréjus. It consists of three smaller villages: the village of Roquebrune-sur-Argens, La Bouverie and Les Issambres. It is home to the French National Water Ski Training Site.

The history of the oldest part of the village of Roquebrune sur Argens began around 983. However, signs of human beings, from the "Bouverian culture", dating from pre-history, were found in caves near La Bouverie. 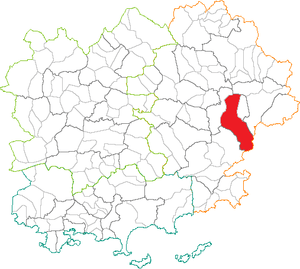 Localisation on Var's map
This article is issued from Wikipedia - version of the 3/4/2016. The text is available under the Creative Commons Attribution/Share Alike but additional terms may apply for the media files.