Hyères (French pronunciation: ​[jɛːʁ]), Provençal Occitan: Ieras in classical norm, or Iero in Mistralian norm) is a commune in the Var department in the Provence-Alpes-Côte d'Azur region in southeastern France.

The old town lies 4 km (2.5 mi) from the sea clustered around the Castle of Saint Bernard, which is set on a hill. Between the old town and the sea lies the pine-covered hill of Costebelle, which overlooks the peninsula of Giens. Hyères is the oldest resort on the French Riviera.[1]

The Hellenic city of Olbia[2] was refounded on the Phoenician settlement that dated to the fourth century BC; Olbia is mentioned by the geographer Strabo (IV.1.5) as a city of the Massiliotes that was fortified "against the tribe of the Salyes and against those Ligures who live in the Alps". Greek and Roman antiquities have been found in the area. The first reference to the town dates from 964.[3]

Originally a possession of the Viscount of Marseilles, it was later transferred to Charles of Anjou. Louis IX King of France (often known as "St Louis") landed at Hyères in 1254 when returning from the Crusades.[3]

A Commandry of the Knights Templar was based at the town in the 12th century, outside the town walls. The remaining remnant is the tower Saint-Blaise.[4]

After defecting from Soviet intelligence in 1937, Walter Krivitsky hid in Hyères (one of the farthest points in France from his operative base in Paris).[5]

As part of Operation Dragoon on 15 August 1944, the joint United States/Canadian First Special Service Force came ashore off the coast of Hyères to take the islands of Port-Cros and Levant. The small German garrisons offered little resistance and the whole eastern part of Port-Cros had been secured by 06:30 am. All fighting was over on Levant by the evening, but, on Port-Cros, the Germans withdrew into old thick-walled forts. It was only when naval guns were brought to bear that they realised that further resistance was useless.[6] An intense naval barrage on 18 August 1944 heralded the next phase of the operation – the assault on the largest of the Hyères islands, Porquerolles. French forces – naval units and colonial formations, including Senegalese infantry – became involved on 22 August and subsequently occupied the island. US/Canadian Special Forces landing at the eastern end of Porquerolles took large numbers of prisoners – the Germans preferring not to surrender to the Senegalese.[7]

Its position facing the Mediterranean to the south makes it a popular location for tourism in the winter, and facilitates the cultivation of palm trees; about 100,000 trees are exported from the area each year. As a result, the town is frequently referred to as Hyères-les-Palmiers (palmiers meaning palm trees). 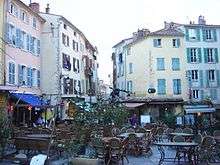 The Place Massillon in Hyères.

Lord Albemarle, the British ambassador, stayed in Hyères during the winter 1767-1768, but it was the two visits of the Prince of Wales during the winters of 1788 and 1789 which made Hyères popular with the British. The English agronomist Arthur Young visited Hyères on the advice of Lady Craven on 10 September 1789. He mentioned the many British living there in his book Travels in France.[3] The London-born and Eton-educated Anglo-Grison Charles de Salis died in Hyères in July 1781, aged 45, and was buried in the Convent des Cordeliers.

William FitzRoy, 6th Duke of Grafton spent the winter and spring each year at Hyères because he and his wife suffered from ill health. An Edwin Lee M.D. published in 1857 a book on the virtues of the climate of Hyères for the recovery of pulmonary consumption [10] and in November 1880 Adolphe Smith first published The Garden of Hyères.[11]

In 1883, Robert Louis Stevenson came to Hyères and for about two years lived first at the Grand Hotel (the building still stands in the Avenue des Iles d'Or), and then in a chalet called Solitude in the present rue Victor-Basch.[3] He wrote then: "That spot our garden and our view are sub-celestial. I sing daily with Bunian, that great bard. I dwell next door to Heaven!" In later years, he wrote from his retreat in Valima: "Happy (said I); I was only happy once; that was at Hyères".

In 1884, Elisabeth Douglas, daughter of Alfred, Lord Douglas, had a small "cottage", as she called it, built on the Costebelle hill by the architect Thomas Donaldson, who used to spend his winters in Hyères during those years.

The British presence culminated in the winter of 1892 (21 March - 25 April) when Queen Victoria came for a stay of three weeks [12] at the Albion Hotel. At that time, the British influence was so strong that shop signs were in both French and English. There was an English butcher, a chemist, two banks, and two golf courses. There were also two English churches (plus one at the Grand Hôtel in Costebelle), whose buildings still exist: All Saint's Church at Costebelle and Saint Paul's English Church, Avenue Beauregard.

Some signs of this English presence have vanished, like the small dell in the cemetery where there were once some hundred graves. Some of these, such as those of Lord Arthur Somerset or Richard John Meade, bore testimony to the aristocratic nature of the community. Other vestiges remain, like the fountain near the new public library in a square shaded by a plane tree. The inscription reads: "In loving memory of Marianne Stewart who died on 18 August 1900. She laboured many years in the cause of mercy to animals. Her last wish was that a drinking fountain should be set up for them in Hyères".

Many wounded British soldiers were sent to the town to convalesce during World War I.

(The American novelist Edith Wharton wintered in Hyères annually from 1919 until her death in 1937. The garden of her villa, Castel Sainte-Claire, is open to the public. The villa previously belonged to Olivier Voutier, a French naval officer, whose grave is in the garden. It was Voutier who discovered the Venus de Milo in 1820 on the Aegean island of Milos.[3])

The airport, which is known officially as the Toulon-Hyères International Airport, is situated 4 km (2.5 mi) to the southeast of the town centre, on a sandy plain close to the seashore. The area was first used by private aircraft at the beginning of the 20th century. In 1920, after the marsh had been drained, French naval aircraft used the field, and, in 1925, it became an official base of the French Fleet Air Arm (Aéronavale). It has been a commercial airport since 1966, but the Navy maintains a significant facility for helicopters and fixed wing aircraft within the perimeter.[13] There are currently (2009) scheduled flights to and from Stockholm, Bristol, Ajaccio, Paris, London, Brest, Brussels and Rotterdam. [14]

Hyères was the birthplace of Jean Baptiste Massillon (1663–1742), churchman and preacher.

The author Jean-Marie-Edmond Sabran (1908 - 1994), who wrote under the pseudonyms Paul Berna (children's fiction), Bernard Deleuse and Paul Gerradwas (adult fiction), and Joel Audrenn (crime novels), was born in Hyères as well as François Coupry (born 1947), winner of the 1970 edition of the Prix des Deux Magots.

The great French historian Jules Michelet frequently spent the winter at Hyères. He died from a heart attack at Hyères on 9 February 1874. He was interred at Hyères. Following his widow's request, a Paris court granted permission for his body to be exhumed on 13 May 1876.

Hyères is twinned with Rottweil, Germany and with Koekelberg, Belgium.

Hyères is home to the Hyères International Fashion and Photography Festival, a huge fashion and art photography event which has taken place annually at the end of April since 1985. This festival was among the first to recognize the talents of Viktor & Rolf.

The city also plays host to the annual MIDI French Riviera Festival in July, a music festival now into its sixth episode. 2010's MIDI saw around 15 acts play at the Villa Noailles complex and brought the new 'MIDI Night' event to Almanarre Beach in the early hours of Sunday morning.