Stabenow served as Chairwoman of the Senate Agriculture Committee 2011-2015. She was re-elected to the seat for a third term in November 2012. She became the state's senior senator upon the retirement of Carl Levin on January 3, 2015. She's served as Vice Chair of the Senate Democratic Policy Committee from 2011 and was elevated to lead it from 2017.

While in graduate school, Stabenow won her first election to public office: the Ingham County Board of Commissioners, a position in which she served from 1975 to 1978.

In 1994, she ran for Governor of Michigan in the Democratic primary, for the opportunity to challenge incumbent Republican John Engler. However, U.S. Congressman Howard Wolpe defeated her in the primary with a plurality of 35% to Stabenow's 30%. After the primary, Wolpe chose Stabenow as his running mate, and she appeared on the general election ballot as the Democratic candidate for Lieutenant Governor.[3] Stabenow failed to become Lieutenant Governor of Michigan as Engler defeated Wolpe 61%-38%.[4]

In 1996, she decided to run for a seat in the United States House of Representatives. She challenged incumbent Republican U.S. Congressman Dick Chrysler of Michigan's 8th congressional district. She defeated him 54%-44%.[5] In 1998, she won re-election to a second term with 57% of the vote.[6] 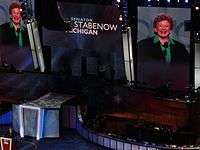 Stabenow speaks during the second day of the 2008 Democratic National Convention in Denver, Colorado.

She did not seek re-election in 2000 in order to challenge incumbent Republican U.S. Senator Spencer Abraham. She won the Democratic primary unopposed. She was considered the underdog for much of the Senate race, but rallied in the final weeks. She defeated him 49.5%-48%, a difference of 67,259 votes.[7]

Before her current committee assignments, Senator Stabenow also served on the Banking, Housing and Urban Affairs Committee and the Special Committee on Aging.

Stabenow is only the second person from Michigan to have served in both houses of the Michigan State Legislature and in both houses of the United States Congress. Stabenow is also the first person to have served as a Michigan state legislator to be popularly elected to the U.S. Senate (until enactment of the Seventeenth amendment to the United States Constitution in 1913, U.S. Senators were selected by the state legislature). No former Michigan state legislator had served in the U.S. Senate since 1894, when Francis B. Stockbridge died.

Stabenow became the third-ranking Democratic Party member in the U.S. Senate on November 16, 2004, when she was elected as secretary of the Democratic caucus. As caucus secretary, she assisted Senate Minority Leader Harry Reid (D-NV) to set the Democratic agenda and priorities. Senator Dick Durbin (D-IL) was elected Minority Whip, the second-ranking Democratic spot. In November 2006, Majority Leader Harry Reid announced that Stabenow would leave the caucus secretary position to succeed Hillary Clinton as chair of the Democratic Steering and Outreach Committee, charged with "engag[ing] Democratic Senators and community leaders across the country in an active dialogue".[10]

Following the withdrawal of Tom Daschle as President Barack Obama's nominee as United States Secretary of Health and Human Services, the National Organization for Women endorsed Stabenow for the position and urged the president to appoint Stabenow, saying, "Sen. Debbie Stabenow (D-Mich.) has long focused on health care as a priority, and with her background as a social worker she is well positioned to take the helm of this agency that is so critical to women and families."[11]

Stabenow became the Chairwoman of the Senate Agriculture Committee in 2011, following the defeat of Chairwoman Blanche Lincoln.[12] A controversial item during Stabenow's tenure, has been the renewal and reform of the 2012 U.S. Farm Bill. Senate Majority Leader Harry Reid (D-NV) demonstrated his commitment to working on a new five-year Farm Bill by reintroducing 2012's Senate Farm Bill in the new 113th Congress in January 2013. Senator Reid indicated that the Farm Bill is on his top priority list, and Senate Agriculture Committee Chairwoman Stabenow has voiced support for Reid’s move stating, "Majority Leader Reid has demonstrated that the Senate will once again make supporting our nation’s agriculture economy while cutting spending a top priority." [13]

On October 29, 2014, Stabenow introduced the Gun Lake Trust Land Reaffirmation Act (S. 1603; 113th Congress), a bill that would reaffirm the status of lands taken into trust by the Department of the Interior (DOI) for the benefit of the Match-E-Be-Nash-She-Wish Band.[14][15] The bill would clarify that the Match-E-Be-Nash-She-Wish Band's land trust could not be challenged in court under the Supreme Court decision of Carcieri v. Salazar.[16]

Stabenow has expressed support in regulating talk radio via a measure like the Fairness doctrine.[17] On February 5, 2009, she stated "I think it’s absolutely time to pass a standard. Now, whether it’s called the Fairness Standard, whether it’s called something else — I absolutely think it’s time to be bringing accountability to the airwaves."[18] Her support for these measures has been met with criticism about a conflict of interest, given that the primary target is conservative talk radio and that her former husband, Tom Athans, has been an executive at a number of liberal progressive talk radio networks, such as Air America[19]

Drilling in the Great Lakes

She authored the first law to ban drilling in the Great Lakes.

On August 31, 2006, Stabenow, along with Senator Carl Levin and Rep. John Dingell, announced an agreement that would completely cease Ontario's dumping of solid waste in Michigan within four years. This has been an issue in Michigan for the past several years. Previously in the Senate, Stabenow wrote legislation intended to reduce the dumping of Canadian trash into Michigan by requiring machines to search trash being dumped across the border.[20] In July 2006, the Senate unanimously passed a law sponsored by Stabenow requiring the payment of $420 inspection fee for every truckload of Canadian trash being brought into Michigan.[21]

On August 10, 2009, Stabenow was reported by The Detroit News as saying "Global warming creates volatility. I feel it when I'm flying. The storms are more volatile. We are paying the price in more hurricanes and tornadoes."[22] However, she has opposed regulation of greenhouse gases, enhanced fuel efficiency standards in California, and greenhouse gas emission reporting standards.[23]

Stabenow supported President Barack Obama's health reform legislation; she voted for the Patient Protection and Affordable Care Act in December 2009,[24] and she voted for the Health Care and Education Reconciliation Act of 2010.[25] She also sponsored S. 2257: Excellence in Mental Health Act.[26]

Stabenow voted in favor of the National Defense Authorization Act for Fiscal Year 2012 in December 2011,[27] which included highly controversial provisions drafted by Senators Carl Levin and John McCain in closed session, that allows for the indefinite military detention of American citizens who are deemed potential terrorists and enemies of the state without trial, challenging the general judicial status of "innocent until proven guilty."

In March 2011, the Think Progress website criticized Stabenow for joining “the pro-polluter frenzy sweeping the U.S. Senate, introducing legislation to permanently cripple Clean Air Act rules on global warming pollution. The legislation in question was the SBIR/STTR Reauthorization Act of 2011 (S.493), which, according to Think Progress, was “being used as a vehicle for senators who wish to prevent regulation of greenhouse pollution from oil refineries, coal-fired power plants, heavy industry, and other major emitters. Stabenow has added her amendment to three others intended to hamstring the Environmental Protection Agency on behalf of carbon polluters.”[28]

Stabenow's proposed amendment to keep the Environmental Protection Agency from regulating greenhouse gas emissions for two years also draw criticism.[29] The amendment would have given “coal-fired power plants, oil refineries and other industrial sources a two year exemption” from rules requiring them to report greenhouse gas emissions.[30] Stabenow defended her position by saying “My amendment is a common-sense approach that allows protections from carbon pollution, determined by scientists and public health experts, to continue being developed while providing businesses the support and incentives they need as they reduce pollution, generate new clean energy technologies and create jobs.”[31]

In 2009, Stabenow voted for President Obama's $787 billion stimulus plan. In 2008, however, she voted against the bailout proposed by President Bush.[32]

Stabenow is for the equal rights of the LGBT community in the U.S. On two separate occasions she has voted against the Constitutional Amendment, 2004 and 2006, to define marriage “as between one man and one woman". In 2006, Stabenow also voted NO on the constitutional ban of same sex marriage.

In 2009, Stabenow said, “I have always said that a strong, national fuel-economy standard is what our country needs, not a confusing patch work of different state standards. I am pleased that the Obama administration heeded my call and developed a national standard for our automakers to follow — a clear standard that will help reduce our dependence on foreign oil." However, an article from The Washington Independent states that her voting record "tells a different tale."[33] In 2002, she voted against "a proposal that would have forced automakers to create vehicles with fleetwide averages of 40 miles-per-gallon by 2015 — 'a strong, national fuel economy standard'." Also, in June 2007, she voted against a bill that would mandate "fleet-wide averages of 35 mpg by 2020."[33]

Stabenow was first married to Dennis Stabenow; the couple divorced in 1990. They have two children, Michelle and Todd.

In 2003, Stabenow married Tom Athans, now co-founder of Democracy Radio and former executive vice president of Air America. By this marriage, she has a stepdaughter, Gina. In 2008, Athans said to the police that he had used the internet “to make a date with a prostitute and paid her $150 for sex at a hotel” in Detroit. The news came about after police investigations into an internet-based prostitution ring operating in the hotel questioned Athans.[34] Stabenow and Athans divorced on May 28, 2010, approximately two years after Athans was detained in Troy, Michigan, as part of a prostitution sting.[35]

Stabenow made a cameo in the 2016 Zack Snyder film Batman v Superman: Dawn of Justice as the Governor of New Jersey, the state in which Gotham City is located in in the DC Extended Universe.[36]