This article is about the Municipality in Tamil Nadu, India. For its namesake district, see Sivagangai district.

Sivagangai kingdom was founded by Sasivarna Periya Oodaya Thevar in 1730. The town was subsequently ruled by his successors and ultimately by Velu Nachiyar under the stewardship of Maruthu Pandiyar. They were against the British Empire, but ultimately lost to them in 1790. The Company appointed Gowry Vallaba Periya Oodaya Thevar as the Zamindar of Sivaganga in 1801, whose successors continued with chaos until India's independence in 1947. It was under Ramnad district until 1984 and subsequently a part of the newly formed Sivaganga district. The town is known for agriculture, metal working and weaving. The region around Sivaganga has considerable mineral deposits.

Sivaganga is administered by a municipality established in 1965. As of 2011, the municipality covered an area of 6.97 km2 (2.69 sq mi) and had a population of 40,403. Sivagangai comes under the Sivaganga assembly constituency which elects a member to the Tamil Nadu Legislative Assembly once every five years and it is a part of the Sivaganga constituency which elects its Member of Parliament (MP) once in five years. Roadways are the major mode of transportation to the town and it also has rail connectivity. The nearest seaport, Thoothukudi Port, is located 189 km (117 mi) from Sivaganga, while the nearest airport, Madurai International Airport, is located 53 km (33 mi) from the town.

During the 17th century, Sivaganga was ruled by the Kingdom of Ramnad, which had its boundary spreading across modern day Sivaganga, Pudukkottai and Ramnathapuram. The seventh king of the empire, Ragunatha Sethupathy (also called Kelvan Sethupathy) ruled from 1674 to 1710 and was succeeded by his sister's son Vijia Regunatha Sethupathy. He was succeeded by his son-in-law Sundareswara Regunatha Sethupathy in 1726. Bavani Sankara Thevan, the illegitimate son of Regunatha Sethupathy aligned with the Rajah of Tanjore to attack Ramnad. Though Bavani won, he did not honour the earlier decision to cede some portions of the empire to the King of Tanjore. He quarrelled with Sasivarna Periya Oodaya Thevar and sent him out of his province. Both Sasivarna and Kattaya Thevar, the brother of Sundareswara, aligned with the Rajah of Tanjore. Both of them conquered Bavani in 1730 with the help of the army of Tanjore. Kattaya Thevar divided the kingdom into five provinces and gave two to Sasivarna, who became the first king of Sivaganga. As per legend, Sasivarna built the Teppakulam and fort around the spring "Sivaganga", where he met his spiritual guru Sathappier. As per another account, Sasivarna was appointed as the king by the Nawab of Carnatic.[4] Sasivarna died at around 1750 and his son Muthuvaduganatha Periya Udaya Thevar took over the reign. He was shot dead in 1780 by Nawab's troops. His widow Velu Nachiyar and infant Vellachi fled the region and were aided by two maruthu brothers namely periya Maruthu and Chinna Maruthu. Velu Nachiyar ruled the region till 1790, when her daughter succeeded her. The brothers still continued the support the new queen. The brothers rebelled against the British East India Company and Nawab of Carnatic, who was supporting the Company. The brothers were later captured and hanged in Tirupathoor. The Company appointed Gowry Vallaba Periya Oodaya Thevar as the Zamindar of Sivaganga in 1801.[5]

Sivagangai has an average elevation of 102 metres (334 feet).The city has a tropical wet and dry climate. The maximum temperature during summer is 39 °C and during winter it is 28 °C. The minimum temperature varies from 24.5 °C to 26.0 °C. The seasonal climate conditions are moderate and the weather is uniformly salubrious. The town gets major rainfall during the North East monsoon period. The Annual normal rainfall varies from 336.2 mm. The average annual rainfall being received in the town is 931 mm.[6] 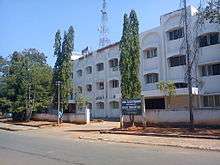 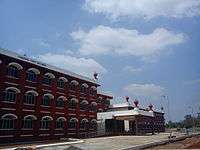 The municipality of Sivaganga was constituted as a third grade municipality in 1965 and promoted to first grade during May 1998.[19] As of 2008, the municipality covered an area of 6.97 km2 (2.69 sq mi) and had a total of 27 members. The functions of the municipality is devolved into six departments: General, Engineering, Revenue, Public Health, Town planning and the Computer Wing. All these departments are under the control of a Municipal Commissioner who is the supreme executive head.[20] The legislative powers are vested in a body of 27 members, one each from the 27 wards. The legislative body is headed by an elected Chairperson assisted by a Deputy Chairperson.[21] The municipality had an income of ₹54,631,000 and an expenditure of ₹75,385,000 for the year 2010–11.[22]

Sivaganga comes under the Sivaganga State Assembly Constituency and it elects a member to the Tamil Nadu Legislative Assembly once every five years.[23][24] From the 1977 elections, the assembly seat was won by Dravida Munnetra Kazhagam (DMK) twice during the 1989 and 1996 elections, the Communist Party of India once during the 2006 elections, Indian National Congress three times during 1977, 1980 and 1984 elections, and the All India Anna Dravida Munnetra Kazhagam (AIADMK) three times during the 1991, 2001 and 2011 elections.[25] The current Member of Legislative Assembly (MLA) of the constituency is Cholan CT. Palanichamy from the AIADMK Party.[17] 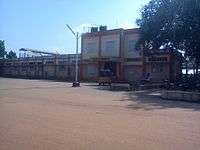 Sivagangai railway station is located in the east side of town, where the railway line of Trichy-Rameshwaram join and this is serving as Guard line for Virudhunagar to Tiruchirapalli Jn for southern districts trains to reach Chennai Egmore and also operating for goods service due to reduce the rush in main line ( Virudhunagar, Madurai Jn, Dindigul, Tiruchy ).[38] Several Express trains and passenger trains are passing through the town and connecting with the cities like Karaikudi, Rameshwaram, Ramanathapuram, Tiruchirapalli, Coimbatore, Erode, Tiruppur, Chennai Egmore, Thanjavur, Viluppuram, Cuddalore, Pudukottai, Virudhachalam, Varanasi, Bhuvaneswar,etc. So There are direct trains from Madurai connecting the important cities in Tamil Nadu like Chennai, Coimbatore, Kanyakumari, Trichy, Tirunelveli, Karaikudi, Mayiladuthurai, Rameswaram, Thanjavur and Virudhachalam. Madurai has rail connectivity with important cities and towns in India.

Madurai International Airport is 40 km away. Tiruchirapalli Airport is about 130 km away.

Graphite is one of the common resources in Sivagangai.[39] Very valuable graphite is available in Sivagangai and its surrounding areas.The Sivaganga graphite is of flaky variety with 14% average Fixed Carbon used in the manufacture of refractory bricks, expanded graphite, crucibles and carbon brushes. TAMIN has over 600 acres of graphite bearing land in Pudupatti, Kumaripatti and Senthiudayanathapuram of Sivaganga taluk, Sivagangai District, Tamil Nadu. Estimated reserve of graphite ore in leasehold area is three million tonnes.(recoverable graphite from 14% F.C is approximately 3 lakh tonnes).[40]

The majority of the workforce is dependent on agriculture (72.8%). The principal crop of Sivaganga district is paddy rice. Most of the district has red soil. The other crops grown are sugarcane, groundnuts, pulses, millet and cereals. Tamil Nadu Agricultural University plans to set up the State's first Red Soil Dryland Research Centre in Sivaganga district.

Sakthi sugar factory is also located in Padamathur, Sivaganga. It has the capacity to produce more than 5000 tons of sugar per day. It provides employment to more than 1000 labourers, directly and indirectly. Moser Baer Clean Energy Limited has commissioned a 5 MW grid connected solar PV project at Sivaganga, Tamil Nadu. The project was awarded to Sapphire Industrial Infrastructure Pvt. Ltd., a wholly owned subsidiary of MBCEL, through a competitive bidding process conducted by the Tamil Nadu Renewable Development Agency. The project is implemented under the 50 MWp generation based incentive scheme of the Ministry of New and Renewable Energy, Government of India.[41]

Electricity supply to Sivaganga is regulated and distributed by the Tamil Nadu Electricity Board (TNEB). The town along with its suburbs forms the Madurai Electricity Distribution Circle.[42] Water supply is provided by the municipality of Sivaganga from Idaikathur Vaigai river (2.5 MLD) and Paiyur Pillai vayal & Keelpathi (0.4 MLD) through feeders located in various parts of the town. In the period 2010–2011, a total of 2.9 million litres of water was supplied everyday for households in the town.[43] About 22.5 metric tonnes of solid waste are collected from Sivaganga every day by door-to-door collection and subsequently the source segregation and dumping is carried out by the sanitary department of the municipality. The coverage of solid waste management had an efficiency of 90% as of 2001.[44] There is no underground drainage system in the town and the major sewerage system for disposal of sullage is through septic tanks, open drains and public conveniences.[45] The municipality maintains a total of 79.57 km (49.44 mi) of storm water drains: 38.75 km (24.08 mi) surfaced drains and 40.82 km (25.36 mi) kutcha drains.[46] There is a government hospital, a government women and children hospital, and 21 private hospitals and clinics that take care of the health care needs of the citizens.[47] There are a total of 2,013 street lamps in Sivaganga: 333 sodium lamps, 1,662 tube lights, 17 mercury vapour lamps and five high mast beam lamp.[48] The municipality operates two markets, namely a daily market and a weely market that cater to the needs of the town and the rural areas around it.[49]