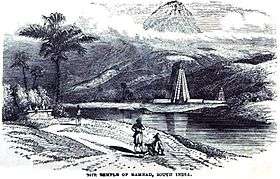 This place is most famous for Rama (Ramayanam) and the place is as old as many centuries, there is no one can predict and most of the peoples across the country come to visit Rameswaram.

Due to many political changes, this place were thrown down to developments and Political parties had their own agents and towards the communal theory or thoughts let aside.

In the late 12th and early 13th century, this province was ruled by Hazrat Sulthan Syed Ibrahim shaheed of Ervadi. Later on His heirs were ruling the province following a peace treaty with the sethupathis. From then, until the early 15th century the present territories of Ramanathapuram district — comprising the taluks Tiruvadanai, Paramakudi, Kamuthi, Mudukulathur, Ramanathapuram and Rameswaram — were included in the Pandyan Empire. For a short period, this area had been under the Chola Dynasty when Rajendra Chola I brought it under his territory in 1063 AD.

In 1520 CE, the Nayaks of the Vijayanagara Empire — Maravar chieftains or Sethupatis who had been subordinate to the Pandyan Kings — took this area under their control from the Pandyan Dynasty and reigned till the 17th century. At the beginning of the 18th century, family disputes over succession resulted in the division of Ramanathapuram. With the help of the King of Thanjavur in 1730 CE, one of the chieftains deposed the Sethupathi and became the Raja of Sivaganga. Acting upon the weakness of the Nayak rulers, the local chieftains (Palayakarars) became independent; the Raja of Sivagangai and the Sethupathi of Ramanathapuram were prominent among them. In 1730, Chanda Shahib of Arcot captured Ramanathapuram. In 1741 the area came under the control of the Marathas and then under the Nizam in 1744 CE. Dissatisfied with the Nawab’s rule, the chieftains revolted, led by the last ruling Nayak, against the Nawab in 1752. By that time, the throne of Arcot had two rivals, Chanda Shahib and Muhammed Ali, and this district was under the rule of Nawab of Arcot. The British supported Chand Sahib, whilst the French supported Muhammed Ali. This paved the way for a series of conflicts in the southern part of the continent also called Carnatic Wars.

In 1795, the British deposed Muthuramalinga Sethupathi and took control of the administration of Ramanathapuram. In 1801 Mangaleswari Nachiyar was made the Zamindar of Sivaganga. After the passing of the Queen Velu Nachiyar, the Maruthu brothers took charge by paying regular revenue to the East India company. In 1803 the Maruthu Pandiyar of Sivaganga revolted against the British in collaboration with Kattabomman of Panchalamkurichi. Colonel Agnew captured and hanged the Maruthu brothers and made Gowri Vallabha Periya Udaya Thevar as Zamindar of Sivaganga. After the fall of Tippu Sultan, the British took control and imprisoned the Nawab. In 1892 the Zamindari system was abolished and a British collector was appointed for administration.

In 1910, Ramanathapuram was formed from portions of Madurai and Tirunelveli districts, with J.F. Bryant as the first collector. During the British period this district was called “Ramnad”; the name continued after independence. Later the district was renamed as Ramanathapuram to be in conformity with the Tamil name for this region."Ramnad" is also known as "Mugavai"(face) since it acts as the entry point for River "Vaigai".

The river Vaigai enters the Big Tank (periya kanmaai) and the water is collected for the purpose of agriculture. It is claimed that the river water does not reach the sea, portraying the size of the catchment area. The town has many ponds catering to the needs of the populace. It is a good sign to have few engineering colleges like Syed Ammal Engineering College and Mohamed Sathak Engineering College.

The town is located on south east Tamil Nadu and connected by NH 49 to Madurai from Rameswaram. East Coast Road is the major coastal road in east Tamil Nadu which connects the state capital Chennai and Ramanathapuram; this road also connects Ramanathapuram with Pondicherry, Tuticorin and Kanyakumari. The town is well connected by railroad to major cities in India through Madurai Junction.

The nearest airport is Madurai Airport, about 125 km.

Ervadi dargah is a major Islamic pilgrimage centre located 27 km from Ramanathapuram where Muslims from across the world come for Ziyarat (spiritual visit). Rameswaram is a holy place known to Hindus as a centre of pilgrimage for Shiva and Rama.

Tourists visit Ramnad to see the Raja Palace, still occupied by the former Sethupaty Raja and his family. Although no longer in power, the family contributes to the community by setting up schools and hospitals. Ramanathapuram is close to Rameswaram and Devipattinam, both important pilgrimage centres. Uchipuli, a main tourist place, which connects through airways Ariyamaan Beach is one among the popular entertainment beaches in Uchipuli. Puduvalasai, Panaikulam, Alagankulam beaches are also popular in Ramnad.