Mayiladuthurai was ruled by Medieval Cholas and subsequently ruled by various dynasties including the Vijayanagar Empire, Delhi Sultanate, Thanjavur Nayaks, Thanjavur Marathas and the British Empire. Mayiladuthurai was a part of the erstwhile Tanjore district until India's independence in 1947 and Thanjavur district until 1991 and subsequently a part of the newly formed Nagapattinam district. The town is known for agriculture, metal working and weaving. The region around Mayiladuthurai has considerable mineral deposits.

Mayiladuthurai is administered by a municipality established in 1865. As of 2008, the municipality covered an area of 11.27 km2 (4.35 sq mi) and had a population of 85,632. Mayiladuthurai comes under the Mayiladuthurai assembly constituency which elects a member to the Tamil Nadu Legislative Assembly once every five years and it is a part of the Mayiladuthurai constituency which elects its Member of Parliament (MP) once in five years. Roadways are the major mode of transportation to the town and it also has rail connectivity. The nearest seaport, Karaikal port, is located 40 km (25 mi) from Mayiladuthurai, while the nearest airport, Tiruchirappalli International Airport, is located 130 km (81 mi) from the town.

Mayiladuthurai gets its name from the Mayura or Mayil (peacock) form in which the Hindu goddess Parvathi worshipped the Hindu god Shiva at this place.[1][2] While previously known by its Sanskrit name Mayuram meaning "peacock town", the town has been recently de-Sanskritized to its Tamil translation Mayiladuthurai as a result of a petition by the Mayuram municipality to the Government of Tamil Nadu in the wake of the Dravidian Movement.[3] The Mayuranathaswami Temple dedicated to the goddess Parvathi is one of the most important Hindu temples in the town. There is a statue depicting goddess Parvathi in a peahen form worshipping a linga, the symbol of the god Shiva to the west of the eastern wall of the temple.[1]

Mayuranathaswami temple tank filled with water from the Kaveri River 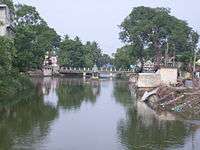 Mayliladuthurai is situated at a distance of 281 kilometres (175 mi) from Chennai and 130 kilometres (81 mi) from Tiruchirappalli.[13] The town is located at 11°06′N 79°39′E﻿ / ﻿11.10°N 79.65°E﻿ / 11.10; 79.65.[14] Situated at a distance of 24 kilometres (15 mi) from the Bay of Bengal coast, the town is situated at an altitude of barely 10 metres (33 ft) above mean sea level.[13] The Kaveri River runs through the town bisecting it into Uttara Mayuram and Mayuram proper. Most of the town lies to the north of the river while the Mayuranathaswami Temple lies a mile to its south. There is a bathing ghat on the Cauvery river. Agriculture is the most widely practised occupation.

The town of Mayiladuthurai is administered by a municipal council which was created in 1866 as per the Town Improvements Act 1865. The council initially had eleven members.[20] This was increased to 18 in 1883 and currently stands at 36.[20][21]

As of 2008, the municipality covered an area of 11.27 km2 (4.35 sq mi) and had a total of 36 members. The functions of the municipality is devolved into six departments: General, Engineering, Revenue, Public Health, Town planning and the Computer Wing. All these departments are under the control of a Municipal Commissioner who is the supreme executive head.[22] The legislative powers are vested in a body of 36 members, one each from the 36 wards.[23] The legislative body is headed by an elected Chairperson assisted by a Deputy Chairperson.[24] There are a total of four revenue villages with Mayiladuthurai - Thiruvilandur, Dharmapuram, Nanchildu and Kornad.[25] The municipality has allocated a budget of ₹2,183,350,000 for the year 2010–11.[26]

Potable water is provided by the municipality. Mayiladuthurai's main source of water in the Kollidam River.[57] A total of 7.50 MLD are pumped out every day from five water tanks located in various parts of the town.[57] About 104 metric tonnes of solid waste is generated everyday, while 85 metric tonnes are collected from the town every day by door-to-door collection and subsequently the source segregation and dumping is carried out by the sanitary department of the municipality.[58] There is limited underground drainage system in the town and the major sewerage system for disposal of sullage is through septic tanks, open drains and public conveniences.[59] The municipality maintains a total of 39 km (24 mi) of surfaced storm water drains and 4 km (2.5 mi) kutcha drains in Mayiladuthurai.[59][60] There are five government hospitals that include a maternity and a veterinary hospital and seventeen private hospitals and clinics that take care of the health care needs of the citizens.[61] There are a total of 3,262 street lamps in Mayiladuthurai: 2 high mast lamps, 2 mini high mast lamps, 624 sodium lamps, 2,334 tube lights and 47 CFL lamps.[62] The municipality operates four markets, namely a vegetable market, weekly market, farmer's market (uzhavar santhai) and fish market that cater to the needs of the town and the rural areas around it.[63]

Hinduism is the major religion followed in Mayiladuthurai and Tamil is the major language spoken.Vanniyars are major community and bhramins, chettiars, Nadars are also in Mayiladuthurai [71] and smaller numbers of Kannadigas and Thanjavur Marathis. There is also a considerable population of Roman Catholics and Muslims. A vast majority of the populace is engaged in agriculture.[25] About 15 percent of the total working population is engaged in trade while 25 percent is engaged in other commercial activities.[25] As per the religious census of 2011, Mayiladuthurai had 88.69% Hindus, 6.38% Muslims, 4.19% Christians, 0.04% Sikhs, 0.03% Buddhists, 0.32% Jains and 0.35% following other religions.[72] 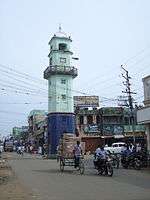 The economy of Mayiladuthurai is primarily agro-based.[73] The main products of Mayiladuthurai are rice, coconuts and plaintains.[74] Confectionaries, printing presses, vehicle manufacturing units and rice mills are the major industries in Mayiladuthurai.[73] Industrial workers form barely 27.14 percent of the town's population.[73] Mayiladuthurai is known for a unique variety of cloth known as the "Kornad cloths" which derive its name from the suburb of Kornad where they are manufactured.[74][75] These cloths are made up of a mixture of cotton and silk and dyed in bright colours.[75]

The first schools Mayiladuthurai were founded by Christian missionaries in April 1819.[78] The Municipal High School constructed by the municipality between 1885 and 1893, was considered to be one of the premium educational institutions in the erstwhile Tanjore district.[21] As of 2011, there were 16 municipal elementary schools, five nursery & primary schools, five middle schools, one high school, two municipal higher secondary schools, two private higher secondary schools, one government higher secondary school, one government arts college, eight matriculation schools, one industrial training institute, one school for blind and one school for handicapped.[79] The A. V. C. College, A. V. C. College of Engineering, A. R. C. Vishwanathan College, C.I.I.T. Community College, Dharmapuram Adhinam Arts College, D. G. Government Arts College for Women, Mayiladuthurai Meenakshi Ramasamy Arts & Science College and Mayiladuthurai Community Centre are some of the important colleges in Mayiladuthurai.[80][81] All these colleges are affiliated to the Bharathidasan University in Tiruchirappalli.[81] 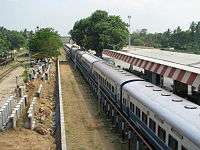 The nearest international airport is the Tiruchirapalli International Airport, located 130 km (81 mi) from Mayiladuthurai while the nearest seaport is the Karaikal Port located 40 km (25 mi) away.

Mayiladuthurai is connected by rail with most important towns and cities in South India. Mayiladuthurai Junction railway station is located on the Main line connecting the state capital Chennai with Thanjavur. There are lines to Tiruvarur and Karaikudi, making it one of the major junctions in the region. The Mysuru - Mayiladuthurai Express connects Kumbakonam with Mysuru and Bengaluru. There are regular express trains that connect the city with major cities in the state like Chennai, Coimbatore, Madurai and Tiruchirappalli.[87] There are passenger trains that connect Mayiladuthurai with Thanjavur, Tiruchirapalli, Thiruvarur,[88] Chidambaram and Viluppuram.[87][89] 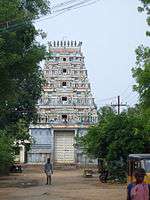 Entrance to the Dakshinamoorthi temple in Mayiladuthurai

The Mayuranathaswami and Dakshinamoorthi temples are built in the Dravidian style of architecture. The Mayuranathaswami Temple was built during the time of the Medieval Cholas and is 719 ft (219 m) long and 520 ft (160 m) wide. The gopuram, the temple gateway tower, at the eastern entrance is 164 ft (50 m) high. Within the Mayuranathaswami temple, there is a carving of a devotee of Shiva trying to cut off his own head as an offering to the God.[90] The oldest inscriptions in the shrine date back to the reign of Kulothunga Chola I (1070–1120 CE).[91] The temple is maintained and administered by the Thiruvaduthurai Adheenam, a South Indian monastic institution.[92] The Dakshinamoorthi shrine houses an idol of the God Dakshinamoorthi mounted on a Nandhi. There is another idol of Nandhi at the bathing ghat on the Cauvery River.

The Punukeeswarar Temple at Kornad and Sri Kasi Viswanathaswami Temple are the other important Shiva temples in Mayiladuthurai.[93] Anandathandavapuram Panchavatiswarar Shiva Temple is located 5 km (3.1 mi) from Mayiladuthurai.[94]

The other prominent temples in the town are Parimala Rangnathar Vishnu temple of lord Vishnu at Thiruvilandur on the northern banks of the Cauvery[95] and Kolikutti Vanamutti Perumal temple.

All the Hindu holy rivers in India are believed to converge in Mayiladuthurai every year on New moon day in the Tamil month of Aippasi (November–December). A bathe at the bathing ghats on the banks of the river Cauvery on this day, according to Hindu belief, relieves a man of all his sins and misdeeds as the waters of the holy Ganges river mix with the Cavery on this day.[1][96] Other important festivals celebrated at the temple are Navarathri, Adi Pooram, Avani Moolam, Karthigai Deepam and Vaikashi Brahmavotsavam [90] An yearly dance festival called the Mayura Natyanjali is conducted within the precincts of the Mayuranathaswami Temple by the Saptasvarangal Trust during Maha Shivaratri on the pattern of the Chidambaram Natyanjali festival.[97][98]

The town is considered the gateway to the Navagraha temple, the nine temples associated with planetary deities. The Periya Pallivasal mosque and TELC Church are other prominent worship places in the town. Tharangambadi, Pichavaram mangrove forest, Tirumullaivasal, Palaiyar and Karaikkal are the most prominent tourist attractions located around the town.[99]