A skull and crossbones warning about dangerous voltage in Mumbai, India

A skull and crossbones is a symbol consisting of a human skull and two long bones crossed together under the skull.[1] The design originates in the Late Middle Ages as a symbol of death and especially as a memento mori on tombstones.

In modern contexts, it is generally used as a warning of danger, usually in regard to poisonous substances, such as deadly chemicals.[2]

History of the symbol 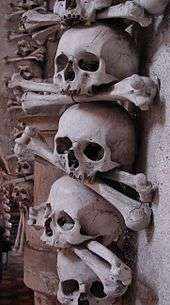 The skull-and-crossbone symbol in origin depicts the typical arrangement of skulls and humeri in ossuaries, as in the depicted example from Sedlec (Czech Republic).

The symbol originates with the medieval Danse Macabre symbolism. By the 15th century, the symbol had developed into its familiar form. Since at least the 15th century it has been used in military flags or insignia, typically expressing the recklessness or ferocity of the unit displaying it, and has additionally become associated with piracy in the 18th century. It came to be used specifically to mark the entrances of Spanish cemeteries, and has been used to mark poison and other dangerous liquids and powders in the 19th century.

The skull and bones are often used in military insignia, e.g. in coats of arms of some military regiments.

In 1829, New York State required the labeling of all containers of poisonous substances. The skull and crossbones symbol appears to have been used for that purpose since the 1850s. Previously a variety of motifs had been used, including the Danish "+ + +" and drawings of skeletons.

In the 1870s poison manufacturers around the world began using bright cobalt bottles with a variety of raised bumps and designs (to enable easy recognition in the dark) to indicate poison, but by the 1880s the skull and cross bones had become ubiquitous, and the brightly coloured bottles lost their association.

As the skull-and-crossbones symbol has also entered popular culture in the context of piracy, and since cartoonish pirates have become popular characters with children, there have been concerns that the "poison" symbol might have the effect of attracting the curiosity of small children familiar with "pirates" as depicted as a toy or play theme. For this reason, in the United States there has been a proposal to replace the skull and crossbones by the "Mr. Yuk" symbol. However, Mr. Yuk and his graphic rendering are registered trademarks and service marks of his creator, the Children's Hospital of Pittsburgh of UPMC, and the rendering itself is additionally protected by copyright. This means that the name and graphic image cannot be used without a license from the owner—unlike the Skull and crossbones, which is in the public domain.