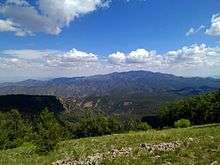 The view from the southern San Mateo Mountains in Socorro County, New Mexico.

Socorro County is a county located in the U.S. state of New Mexico. As of the 2010 census, the population was 17,866.[1] The county seat is Socorro.[2] The county was formed in 1852 as one of the original nine counties of New Mexico Territory.[3][4] Socorro was originally the name given to a Native American village (see: Puebloan peoples) by Don Juan de Oñate in 1598. Having received vitally needed food and assistance from the native population, Oñate named the pueblo Socorro ("succor" in English).

The history of Socorro County is intimately linked with the rich history of the surrounding area. Basham noted in his report documenting the archeological history of the Cibola National Forest’s Magdalena Ranger District, which is located almost entirely within Socorro County, that “[t]he heritage resources on the district are diverse and representative of nearly every prominent human evolutionary event known to anthropology. Evidence for human use of district lands date back 14,000 years to the Paleoindian period providing glimpses into the peopling of the New World and megafaunal extinction.“[5] Much of the now Magdalena Ranger District were a province of the Apache. Bands of Apache effectively controlled the Magdalena-Datil region from the seventeenth century until they were defeated in the Apache Wars in the late nineteenth century.[5] Outlaw renegades Butch Cassidy and the Wild Bunch and notorious Apaches like Cochise and Geronimo have ties to Socorro County's San Mateo Mountains. Vicks Peak was named after Victorio, “a Mimbreño Apache leader whose territory included much of the south and southwest New Mexico.”[6] Famous for defying relocation orders in 1879 and leading his warriors “on a two-year reign of terror before he was killed,” Victorio is at least as highly regarded as Geronimo or Cochise among Apaches.[6] Perhaps most famous outlaw was the Apache Kid whose supposed grave lies within the Apache Kid Wilderness. Stories of depredations by the Apache Kid, and of his demise, became so common and dramatic that in southwestern folklore they may be exceeded only by tales of lost Spanish gold.[5] Native Americans lingered in the San Mateos well into the 1900s. We know this by an essay written by Aldo Leopold in 1919 where he documents stumbling upon the remains of a recently abandoned Indian hunting camp.[7]

A mining rush followed the Apache wars – gold, silver, and copper were found in the mountains. It wasn’t until this time that extensive use of the area by non-Native Americans occurred.[8] While some mining activity, involving gold, silver, and copper, occurred in the southern part of the range near the end of the nineteenth century,[9] the prospecting/mining remnants are barely visible today due to collapse, topographic screening, and vegetation regrowth. While miners combed the mountains for mineral riches during the late nineteenth and early twentieth centuries, stockmen drove tens of thousands of sheep and cattle to stockyards at the village of Magdalena, then linked by rail with Socorro.[6] In fact, the last regularly used cattle trail in the United States stretched 125 miles westward from Magdalena. The route was formally known as the Magdalena Livestock Driveway, but more popularly known to cowboys and cattlemen as the Beefsteak Trail. The trail began use in 1865 and its peak was in 1919. The trail was used continually until trailing gave way to trucking and the trail official closed in 1971.[5]

Socorro County ranges in elevation from approximately 4,528 ft (1,380 m) on the banks of the Rio Grande to 10,784 ft (3,287 m) at the top of South Baldy peak in the Magdalena Mountains. The southern portion of the Rocky Mountains extend into New Mexico and Socorro County. There are several mountain ranges that spread throughout the county. The Forest Service manages portions of four mountain ranges: the Bear, Datil, Magdalena, and San Mateo Mountains. Most of the land that comprises these mountains are within the Cibola National Forest. These ranges, as well as Ladron Peak located in Socorro County, are classified as sky islands.

The majority (51 percent) of voters registered in the 2012 General Election were Democrats, with the rest of registered voters breaking down as 30 percent Republican, 15 percent Declined To Say, and 3 percent Other.[21] In 2012, Socorro County voted for President Obama 56 percent to 38 percent,[22] with a trend of voting democratic in the previous three presidential elections. Socorro County voted for Senator Heinrich (D) 53 percent to 43 percent in 2012. While Rep. Pearce (R) won Socorro County 52 percent to 48 percent in 2012, Socorro supported Democrats for the U.S. House in both 2008 and 2010 (with 50.2% and 63% Democratic, respectively).[23] The County supported Governor Martinez (R) 53 percent to 47 percent in 2010 but went for Governor Richardson (D) in both 2002[24] and 2006.[25] Socorro has supported Democratic state senators in Districts 28 and 30 for every election since 2000. In contrast, the County has supported a Republican state representative in District 49 since 2000. The current county commissioners of Socorro County are:

Ravi Bhasker has been serving as the mayor of Socorro since 1990 and is a general practice medical doctor.[26] The current mayor of Magdalena is Richard Rumpf (ZW), elected by the village board upon the previous mayor's resignation in 2016.

There are three congressionally designated Wilderness areas located within Socorro County. The Apache Kid and the Withington Wilderness Areas are both located in the San Mateo Mountains within the Cibola National Forest's Magdalena Ranger District. The Bosque del Apache Wilderness comprises two separate sections, totaling 30,427 acres of the National Wildlife Refuge. There are an additional 172,143 acres of Forest Service Inventoried Roadless Areas and 159,891 acres of BLM Wilderness Study Areas in the county. These unroaded, undeveloped lands offer outstanding opportunities to experience the area’s amazing natural heritage, to getaway and enjoy the outdoors and, for the hearty, to explore deep into the backcountry and challenge yourself in the area’s big wild.

The high mountains, remote canyons, pristine forests and diverse wildlife found on the area's national forests, national wildlife refuges, national monuments, and BLM's national system of public lands provide for phenomenal recreation opportunities, including picnicking, hiking, backpacking, wildlife viewing, horseback-riding, and hunting. In fact, the four biggest elk in New Mexico were bagged in Socorro county and the Datil Mountains.[28] The two most popular recreational activities on the Cibola National Forest are hiking/walking and viewing natural features with 35% and 15% of visitors citing these as their main activities, respectively.[29] The Bosque del Apache National Wildlife Refuge hosts the Festival of the Cranes every November, celebrating the arrival of sandhill cranes and other migratory birds.[30] Rare whooping cranes are also found occasionally on the Bosque del Apache.

The natural amenities in Socorro contribute to a strong tourism industry for the County. Visitors spent $47.4 million in Socorro County in 2011. Recreation alone accounted for more than $4 million in visitor spending in both 2010 and 2011.[31] Tourism accounts for 8.8% of employment and 4.5% of labor income for the County. Additionally, tourism resulted in $7.7 million of total tax revenue, including $1.1 million in local tax revenue.[32] 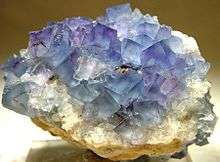 Fluorite from the Blanchard mine, near Bingham, New Mexico