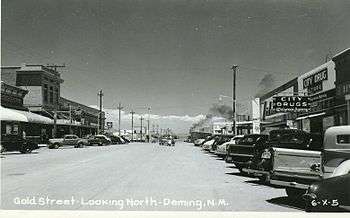 Deming is a city in Luna County, New Mexico, United States, located 60 miles (97 km) west of Las Cruces and thirty-three miles north of the Mexican border. The population was 14,855 according to the 2010 census.[1] Deming is the county seat and principal community of Luna County.[2]

The city, founded in 1881 and incorporated in 1902, was an important port of entry on the US-Mexican border until the Gadsden Purchase of 1853. A nickname was given to the city at the time of its founding, "New Chicago." It was expected that with the surge of railroad usage, that the city would grow drastically and resemble Chicago, Illinois.

Deming is named after Mary Ann Deming Crocker, wife of Charles Crocker, one of The Big Four of the railroad industry. The Silver Spike was driven here in 1881 to commemorate the meeting of the Southern Pacific with the Atchison, Topeka & Santa Fe railroads. This was the second transcontinental railroad to be completed in the United States.

There are numerous ancient Native American sites around Deming. The Mimbres and Casas Grandes cultures made pottery of remarkable quality, and the Deming area is rich in native pottery artifacts, as well as beads, stone implements, stone carvings, graves, etc.

The city of Deming is governed by a council of four and a mayor. The mayor is elected by popular vote rather than by the council.

The city council consists of the following representatives from four districts:

On March 4, 2014, Councilman Sanchez was re-elected, Victor Cruz was elected to District 4, and Benny Jasso was elected Mayor.

According to the United States Census Bureau, the city has a total area of 9.3 square miles (24.2 km²), all land. The city is surrounded by land that appears flat, with wide rubble aprons around the nearby mountains and imperceptible grades in various directions.

The Mimbres River floods the Deming area once a decade or so, in periods of unusually heavy rainfall in the Cooke's Range and Black Range to the north.

Deming and its surrounding area is underlain by an aquifer of good-quality water. The aquifer is slowly recharged primarily by water from the mountains to the north. The water usually has a high sulfur content.

Deming is located within the Upper Chihuahuan Desert climate zone. The climate is dry, hot, and breezy. Summer temperatures often exceed 100 °F (37.8 °C), but the altitude (4300 ft / 1310 m) and dry air sometimes make summer days more comfortable than one would expect given the high temperature.[4]

Most precipitation occurs as thunderstorms and showers during the July–September monsoon period. Minor flooding sometimes occurs over large areas of flat ground. There are periods lasting from 5 to 20 years of relatively wet or dry years. Springtime is often windy, and dust storms can be severe—occasionally lasting for days. Snow is likely to fall in winter, but usually melts in a day or two. Temperatures in winter are sometimes below freezing at night, but winter days are generally mild and sunny.

Deming is the only major stop on Interstate 10 between Lordsburg, 60 miles (97 km) west, and Las Cruces, 60 miles (97 km) east. Deming is also the closest major town to Silver City, 50 miles (80 km) north, and it provides access to Chihuahua, Mexico, via the village of Columbus, New Mexico, 30 miles (48 km) to the south. Deming also sits astride one of the major railroad lines linking the East Coast with the West Coast. (via the Southern Route)

In 2006, this city's role in American homeland security expanded. Deming's industrial park became the home of a Border Patrol training center, a 10-acre (4.0 ha) forward operating base named Border Wolf that supported Operation Jump Start.[9] These temporary buildings at the airport have since been disassembled and removed.

The old Deming train depot in 1983

Since 1953, several motion pictures have been filmed in Deming: 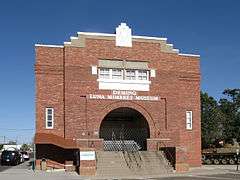 Nearby are City of Rocks State Park, with volcanic rock formations,[14] and Rockhound State Park, offering mineral and rock collecting.[15]

The Great American Duck Race is held every year on the third weekend of August. It features wet and dry duck race tracks, a hot air balloon show, a Tournament of Ducks Parade, a carnival, and a variety of vendors setting up their wares in the Courthouse Square and surrounding property.[16][17]

Deming has two wineries. St. Clair Winery is New Mexico's largest winery.[18] The Luna Rossa Winery is a local estate winery that produces all of its wines with varieties grown on their own vineyards.

Deming is the birthplace of:

George Scarborough (October 2, 1859 – April 5, 1900) was a cowboy, and lawman who lived during the time of the Wild West. He is best known for having killed outlaw John Selman, killer of John Wesley Hardin, and for his partnership with lawman Jeff Milton, with the pair bringing down several outlaws during their time together.

On January 2, 2013, a man was pulled over in Deming by police for a rolling stop. Based on claim of "clenched buttocks," police obtained a search warrant and executed multiple cavity searches and several other medical procedures on the driver.[19] No drugs were found, and the driver was sent a bill for the procedures performed by Gila Regional Medical Center.[20][21] In January, 2014, the lawsuit with Hidalgo County and the city of Deming was settled for a total of $1.6 million.[22]