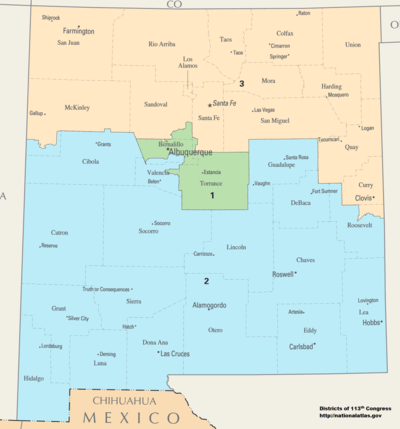 List of members of the New Mexico United States House delegation, their terms in office, district boundaries, and the district political ratings according to the CPVI. The delegation has a total of 3 members, with 2 Democrats, and 1 Republican.

Tables showing membership in the New Mexico federal House delegation throughout history of statehood in the United States.

1 Election law in New Mexico prior to 1960 dictated that if a seat was vacated by resignation or death, the term would expire naturally without a special election. This law was changed due to the close proximity of Representatives' Antonio M. Fernández and John J. Dempsey deaths, leaving New Mexico with only one representative for an extended length of time. 2 Néstor Montoya died January 13, 1923. 3 Antonio M. Fernández died November 7, 1956, just hours after being re-elected to an 8th term. 4 John J. Dempsey died March 11, 1958. 5 Steven Schiff died March 25, 1998.

Tables showing membership in the New Mexico federal Senate delegation throughout history of statehood in the United States.

As of April 2015, there are three former U.S. Senators from the U.S. State of New Mexico who are currently living at this time, two from Class 1 and one from Class 2.