For the district of the same name, see Shravasti district.

Shravasti (IAST: Śrāvastī; Pali: Sāvatthī) was a city of ancient India and one of the six largest cities in India during Gautama Buddha's lifetime. The city was located in the fertile Gangetic plains in the present-day district of the same name, Shravasti, that belongs to Devipatan Division of Uttar Pradesh near Balrampur, some 170 kilometres (106 mi) north-east of Lucknow. Earlier, it was a part of the Bahraich district, but the latter was split due to administrative reasons.

Shravasti is located near the West Rapti River and is closely associated with the life of Gautama Buddha, who is believed to have spent 24 Chaturmases here.[1] Age-old stupas, majestic viharas and several temples near the village of "Sahet-Mahet" establish Buddha's association with Shravasti. It is said that the Vedic period king, Shravasta, founded this town.

Shravasti was the capital of the Kosala Kingdom during 6th century BCE to 6th century CE. This prosperous trading centre was well known for its religious associations. Sobhanath temple is believed to be the birthplace of the Tirthankara Sambhavanath in Jainism, making Shravasti an important center for Jains as well. According to Nagarjuna, the city had a population of 900,000 in 5th century BCE and it even overshadowed Magadha's capital, Rajgir.

As mentioned in the 'Bruhatkalpa' and various Kalpas of the fourteenth century, the name of the city was Mahid. There are subsequent mentions showing that the name of this city was Sahet-Mahet. It is also mentioned that a vast fort covered this city in which there were many temples with idols of Devkulikas.

Today a great rampart of earth and brick surrounds this city. During excavation in 'Sahet-Mahet' near Shravasti City, many ancient idols and inscriptions were found. They are now kept in museums at Mathura and Lucknow. At present, the archaeological department of the Indian Government is excavating the site to perform allied research. Jetavana monastery was a famous monastery close to Shravasti. 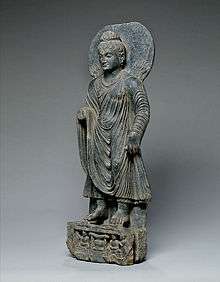 Statue of Buddha performing the Miracle of Shravasti Gandhara, 100-200 CE.

According to the Mahabharata, Shravasti is named after the legendary king Shravasta. According to Buddhist tradition, the city was called Savatthi because the sage Savattha lived there. As per the Ramayana, the king of Kosala, Rama, installed his son Lava at Shravasti and Kusha at Kushavati.

Shravasti was located on the banks of the river Achiravati (now called the Rapti river). It was the capital city of the kingdom of Kosala, and its king was called Pasenadi, who was a disciple of Buddha. It is a beautiful city with vast amounts of agriculture and diversity. Buddhaghosa says[2] that, in the Buddha's day, there were fifty-seven thousand families in Shravasti, and that it was the chief city in the country of Kasi Kosala, which was three hundred leagues in extent and had eighty thousand villages. He stated the population of Shravasti to have been 180 million(?).[3] The road from Rajagaha to Shravasti passed through Vesali, and the Parayanavagga[4] gives as the resting places between the two cities: Setavya, Kapilavatthu, Kusinara, Pava and Bhoganagara. Further on, there was a road running southwards from Shravasti through Saketa to Kosambi. Between Saketa and Shravasti was located Toranavatthu.[5]

The Buddha passed the greater part of his monastic life in Shravasti. His first visit to Shravasti was at the invitation of Anathapindika, whom he met in Rajagaha. The main monasteries in Shravasti were the Jetavana and the Pubbarama. Shravasti also contained the monastery of Rajakarama, built by Pasenadi, opposite Jetavana. Not far from the city was a dark forest called the Andhavana, where some monks and nuns went to live. Outside the city gate of Shravasti was a fisherman's village of five hundred families.[6] 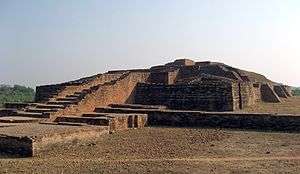 The chief patrons of the Buddha in Shravasti were Anathapindika, Visakha, Suppavasa and Pasenadi.[7] When Bandhula left Vesali, he came to live in Shravasti.

Woodward states[8] that, of the four Nikayas, 871 suttas are said to have been preached in Shravasti; 844 of which are in Jetavana, 23 in the Pubbarama, and 4 in the suburbs of Shravasti. These suttas are made up of 6 in the Digha Nikaya, 75 in the Majjhima Nikaya, 736 in the Samyutta Nikaya, and 54 in the Anguttara Nikaya. The Commentaries state that the Buddha spent twenty-five rainy seasons in Shravasti, thus leaving only twenty to be spent elsewhere. Of the 25 rainy seasons which Buddha lived in Shravasti,[9] he spent 19 in the monastery named Jetavana, and 6 in the monastery called Pubbarama. Thus, Shravasti is the place where Buddha lived the longest amount of time, and it is the place where he gave the largest amount of discourses and instructions.

The Chinese Pilgrim Xuanzang found the old city in ruins, but recorded the sites of various buildings.[10]

The ruins at Saheth and Maheth on the boundaries of the Gonda and Bahreich districts of Uttar Pradesh are believed to be the site of ancient Shravasti. Maheth was the city-proper while the Jetavana monastery was at Saheth.[11]

Of the ancient Shravasti, the city walls are still standing. Within these, the remains of 3 ancient buildings can be visited: Angulimala's stupa, Anathapindika's stupa, and an old temple dedicated to a Jain Tirthankara. Outside of Shravasti is located the stupa where the Twin Miracle (Pali:Yamaka-pātihāriya) took place. The site of Jetavana monastery is the main pilgrim destination, with meditation and chanting mainly done at the Gandhakuti (Buddha's hut) and the Anandabodhi tree. Buddhist monasteries from the following countries have been constructed at Shravasti: Thailand, South Korea, Sri Lanka, Myanmar, Tibet and China.