Rajgir (originally known as Girivraj) is a city and a notified area in Nalanda district in the Indian state of Bihar. The city of Rajgir (ancient Rājagṛha; Pali: Rājagaha; Hindi: राजगृह) was the first capital of the kingdom of Magadha, a state that would eventually evolve into the Mauryan Empire. Its date of origin is unknown, although ceramics dating to about 1000 BC have been found in the city. This area is also notable in Jainism and Buddhism[3] as one of the favorite places for Lord Mahavira and Gautama Buddha and the well known "Atanatiya" conference was held at Vulture's Peak mountain.

Rajgir is connected to Patna via Bakhtiarpur by rail and road. Bakhtiarpur lies midway between Patna and Mokameh. Road access is by NH 30A to Bakhtiarpur and NH 31 towards south to reach Bihar Sharif. From Mokameh NH 31 to Bihar Sharif. From there, NH 82 will leads to Rajgir. Rajgir is around 100 KM from both Patna and Mokameh. It is located in a green valley surrounded by rocky hills, Rajgir hills. A daily Indian Railways train Shramjeevi Express connects Rajgir with the Indian capital New Delhi.

The name Rajgir came from Rājagṛiha 'house of the king' or "royal house", or the word rajgir might have its origin in its plain literal meaning, "royal mountain". It was the ancient capital city of the Magadha kings until the 5th century BC when Udayin(460-440 BC),son of Ajatshatru,moved the capital to Pataliputra.[4] In those days, it was called Rajgrih, which translates as 'the home of Royalty'. Shishunaga founded Shishunaga dynasty in 413 BCE with Rajgir as its initial capital before it was moved to Pataliputra.

The epic Mahabharata calls it Girivraja and recount the story of its king, Jarasandha, and his battle with the Pandava brothers and their allies Krishna. Jarasandha who hailed from this place, had been defeated by Krishna 17 times. The 18th time Krishna left the battlefield without fighting.[5] Because of this Krishna is also called 'ranachorh' (one who has left the battlefield).[6] Mahabharata recounts a wrestling match between Bhima (one of the Pandavas) and Jarasandha, the then king of Magadha. Jarasandha was invincible as his body could rejoin any dismembered limbs. According to the legend, Bhim split Jarasandha into two and threw the two halves facing opposite to each other so that they could not join. There is a famous Jarasandha's Akhara (place where martial arts are practiced). It is also mentioned in Jain and Buddhist scriptures, which give a series of place-names, but without geographical context. The attempt to locate these places is based largely on reference to them and to other locations in the works of Chinese Buddhist pilgrims, particularly Faxian and Xuanzang. It is on the basis of Xuanzang in particular that the site is divided into Old and New Rajgir. The former lies within a valley and is surrounded by low-lying hills, Rajgir hills. It is defined by an earthen embankment (the Inner Fortification), with which is associated the Outer Fortification, a complex of cyclopean walls that runs (with large breaks) along the crest of the hills. New Rajgir is defined by another, larger, embankment outside the northern entrance of the valley and next to the modern town. It was here that Gautama Buddha spent several months meditating, and preaching at Gridhra-kuta, ('Hill of the Vultures'). He also delivered some of his famous sermons and initiated king Bimbisara of Magadha and countless others to Buddhism. On one of the hills is the Saptparni cave where the First Buddhist Council was held under the leadership of Maha Kassapa.

It is sacred to the memory of the founders of both the religions: Jainism and Buddhism and associated with both the historical Mahavira and Buddha.

Lord Mahavira, 24th Tirthankara spent fourteen years of his life at Rajgir and Nalanda, spending Chaturmas (i.e. 4 months of the rainy season) at a single place in Rajgir (Rajgruhi) and the rest in the places in the vicinity. It was the capital of his favourite Shishya (follower) King Shrenik. Thus Rajgir is a very important religious place for Jains.The twentieth Jain tirthankara, Munisuvrata is supposed to have been born here.An ancient temple(about 1200 years old) dedicated to Munisuvrat bhagwan is also present here along with many other jain temples.This temple is also a place for four Kalyanakas of Bhagwan Munisuvratnath. 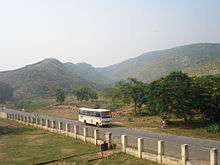 The city was in a valley surrounded by seven hills: Vaibhara, Ratna, Saila, Sona, Udaya, Chhatha, and Vipula.

Rajgir has also developed as a health and winter resort due to its warm water ponds. These baths are said to contain some medicinal properties that help in the cure of many skin diseases. The Saptparni cave is also the source of the Rajgir Hot Water Springs that have curative properties and are sacred to the Hindus, Jains and Buddhists. Another attraction of the region is the ropeway that leads uphill to the Vishwa Shanti Stupa (Peace Pagoda), Makhdoom Kund and monasteries built by Japanese devotees of the Buddha on top of the Ratnagiri Hills. 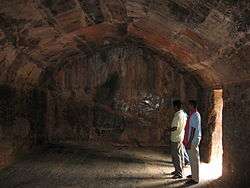 The renowned Son Bhandar Caves is situated at Rajgir, Nalanda in Bihar state. Son Bhandar group of caves has two caves known as eastern and western cave. Son bhandar caves are concerned with Jainism and considered to belong to 3-4 century AD. These caves were first inspected by Cunninghum and he concluded to have analogy with Saptparni caves of Buddhism creed. After Cunninghum several scholars visited this place and some had opinion to concern with Buddhism. After some time all Buddhism connections were refused because of an inscription found on the southern wall of a cave. According to this inscription these caves were built by inspiration of a Jain Muni Vair for Jain ascetics. Sculptures of Teerthankaras were also carved in these caves. From architectural aspect; these caves are analogous to Nagarjuni cave and Barbar caves of Mauryan era. Therefore, it can be concluded that construction time should not be much differ from above mentioned caves. These caves should be related to Digambar sect of Jainism as Xuanzang wrote in his book about Vaibhar hill of rajgir that the place was occupied by Digambar Jaina monks for meditation purpose. After some centuries these caves were converted by Hindus as Lord Vishnu sculpture was also found from mound of a cave.(Source: http://www.jainglory.com/research/son-bhandar

Historically, Rajgir has been a very important place in Jainism, as capital to many empires. Main tourist attractions include the ancient city walls from Ajatshatru's period, the Bimbisar's Jail, Jarasandh's Akhara, Gridakuta hill, Sonabhandara cave[8] and the Jain temples on the five peaks.(Source: http://www.jainglory.com/research/son-bhandar

Rajgir is famous for its hot water springs, locally known as Brahmakund, a sacred place for Hindus. Another major attraction is the peace pagoda, Vishwa Shanti Stupa, built in 1969, one of the 80 peace pagodas in the world, to spread the message of peace and non-violence. The rope-way that leads to it is another attraction. The Japanese temple is beside the Venu Vana. Venu Vana is an artificial forest, where one can enjoy Eternal peace, and meditate.And famous Makhdoom Kund. Sri Ramakrishna Math is a non-political spiritual organization which have been engaged in various forms of humanitarians, social service activities. 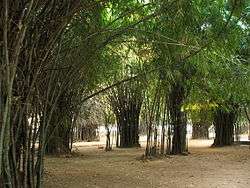