Sukkur , formerly Aror [ərōr] (Sindhi: اروڙ‎, Urdu: اروڑ) and Bakhar, is the 14th largest city of Pakistan[1] and third largest city of the province of Sindh. It is situated on the west bank of Indus River and is the headquarters of Sukkur Division and Sukkur District. The word Sakhar means "superior" in Sindhi, and the spelling of the city's name in Sindhi suggests this is the origin of the name. Modern Sukkur was built by the British general Sir Charles Napier in the 1840s.[2]

The city of Sukkur is the capital of Sukkur Division and also Divisional and district headquarters. Tehsils (Talukas) and contains many Union council.[3]

Sukkur is noteworthy in Sindh and Pakistan generally for its comparative tolerance towards religious and ethnic minorities. The city has its own Culture. [4] The city is a multiethnic mix of Sindhis, Punjabis, Brahuis, Balochis and Pakhtuns. The independence of Pakistan in 1947 when Pakistan was carved out of India as the result of the Muslim vote, saw an influx of Muslims, including Urdu-Speaking Muhajirs, Bandhani-speaking Rajputs, Marwari, from Rajasthan, Memons from Bombay, Gujrati and Kathiawari migrated from India and settled here. Some of the Bandhani, Memons, Marwari, and Punjabis did however settle here before partition, i.e., the independence of Pakistan in 1947. Both Brahuis, Balochis speak Sindhi language as their mother tongue. Sindhis are native to the area and speak various dialects, including Utradi, Lari, Lasi, Thari and Dadhki. A large number of Punjabis were attracted to the city after the Indus treaty settlement [5] and settled around downtown and Chowk Ghantaghar in the central part of the city. 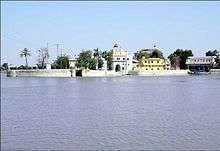 Sadh Belo, The Hindu temple in the middle of River Indus at Sukkur 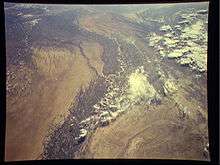 A Satellite Image of River Indus near Sukkur by NASA

The district of Sukkur (whose name is derived from its headquarters Sukkur city) covers an area of 5,165 square kilometres. Geographically it is spanned from 27°05' to 28°02' north latitudes and from 68°47' to 69°43' east longitudes. The city of Sukkur is located at an altitude of 220 feet (67 m) from sea level, having terrestrial coordinates 68°52' east and 27°42' north. It is also the narrowest point of the lower Indus course.

Sukkur district shares its northern border with Shikarpur and the recently constituted Kashmore districts. Ghotki is located on the north-eastern side while Khairpur on the south. The border with India lies further east. Sukkur is also connected by road and by air with all major cities of Pakistan.

The climate of Sukkur is characterised by very hot and hazy summer with dry and cool winter. Throughout the whole year wind speed is low and sunshine is abundant as the district exhibits a desert climate. Summer is very hot as the temperature can reach 50 °C (122 °F). Dry heat is experienced starting April to early June until the Monsoon season starts to arrive. Monsoons in the city of Sukkur are not very wet, but extremely high dew point couple up with very hot temperature makes the temperatures extremely uncomfortable. Dew point over 30 °C (86 °F) and heat index in excess of 65 °C (149 °F) are recorded on some days, which are some of highest heat indices recorded in the world. Monsoons recede by September, but it is not until late October that the short lived autumn season is experienced.[7] The average annual rainfall of the city is a scanty ... However, winter is mild and cool. Night temperatures rarely fall below freezing while day time temperatures are rather warm and comfortable. It is one of the few districts of Sindh to experience foggy conditions similar to that of north and central Punjab. 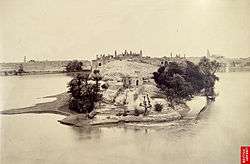 Sukkur on the west bank of the River Indus (1860s)

Sukkur has been an important strategic centre and trading route from time immemorial. Alor (or Aror, Sukkur) held the status of capital under the reign of Musikanos, when Alexander invaded the region in 326 BCE. The ruins of this ancient town still exist, 8 kilometres (5.0 mi) east of Rohri, in Sukkur district. The Rai dynasty built a huge temple of Shiva. In 711 CE, the Arabs taken over Sindh, led by 17-year-old Muhammad bin Qasim, and Sukkur (including all of Sindh and lower Punjab) became part of the Umayyad Caliphate. 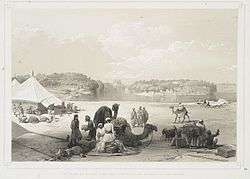 Later Mughals and many semi-autonomous tribes ruled over Sukkur. The city was ceded to Mirs of Khairpur between 1809 and 1824. In 1833, Shah Shuja (a warlord of Kandahar, Afghanistan) defeated the Talpurs near Sukkur and later made a solemn treaty with the Talpur ruler, by which he relinquished all claims on Sindh. In 1843, the British (General Charles James Napier) defeated the Talpurs at the battles of Miani and Dubbo near Hyderabad. Sukkur, along with the rest of Sindh, was under British rule until the independence of Pakistan in 1947. The (current) district of Sukkur was constituted in 1901 out of part of Shikarpur District, the remainder of which was formed into the Larkana District. Sukkur saw a significant socio-economic uplift after the 1930s, when the British built the world's largest barrage here on the Indus River. The predominantly Muslim population supported Muslim League and Pakistan Movement. After the independence of Pakistan in 1947, the minority Hindus and Sikhs migrated to India while the Muslim refugees from India settled in the Sukkur.

The fortress of Bhakkar

The fortress of Bhakkar was built in the beginning of 16th century by Shah Beg on an island in the Indus River between Sukkur and Rohri.[8] It was captured by Sher Shah Suri when Humayun was defeated by him but came again under Mughals in 1574 during Akbar's rule.[9]

The Sukkur Barrage has 66 [10][11] Gates. The Sukkur Barrage (formally called Lloyd Barrage), built under the British Raj on the Indus River, controls one of the largest irrigation systems in the world. It was designed by Sir Arnold Musto KCIE, and constructed under the overall direction of Sir Charlton Harrison, KCIE, as Chief Engineer. Construction of the barrage was started in 1923 and completed in January 1932. The 5,001 feet (1,524 m) long barrage is made of yellow stone and steel and can water nearly 10 million acres (40,000 km2) of farmland through its seven large canals. Some of the canals are larger than the Suez Canal.

In November 2004, the government of Pakistan initiated a rehabilitation project to revitalise its water storage capacity and distribution efficiency. The project was completed in July 2005, (with less than the allocated amount of Rs. 887 million). Experts believe that the rehabilitation of the barrage has enhanced its efficiency for another 60 to 70 years.[12] 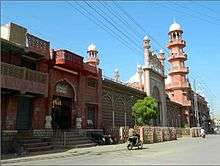 Sukkur had a large fertile and cultivable land area. During kharif, rice, bajra, cotton, tomatoes and peas are cultivated; whereas during rabi the main crops are wheat, barley, graham and melons. Sukkur is famous, world over, for its dates. Sukkur also has a large Riveraine forest along the course of the Indus. These tropical forests are found within the protective embankments on either side of the Indus. During 1997–98 the total area under forests was 510 km2 which yielded 55,000 cubic feet (1,600 m3) of timber and 27,000 cubic feet (760 m3) of firewood besides other mine products.[13][14] 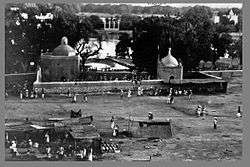 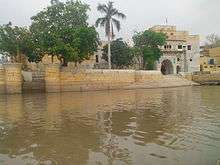