Tales Schütz (born 22 August 1981 in Porto Alegre, Brazil) is a Brazilian footballer who is currently playing for Esporte Clube São José. He is also of German ancestry.[1]

Schütz started his career his Brazilian club Botafogo before loan spells at Atlético Paranaense, Ashdod and Maccabi Netanya in Israel and Akratitos in Greece. Schütz also had a brief spell playing in Poland for Jagiellonia Białystok.

On 14 August 2006, Schütz went on loan to Hong Kong First Division League side South China for the 2006–07 season. During his first season in Hong Kong, he obtained 3 out of the 4 Top Scorer Awards in local competition, including the main Hong Kong First Division League Top Scorer Award. He wore the No. 28 jersey in South China which represents the date on which he first met his wife.[2] In January 2008, Schütz signed permanently on a four-year contract with South China for a transfer fee of more than HK $1 million, a record breaking fee for Hong Kong. Schutz returned to Brazil in early 2011 for injury treatment before not having his contract renewed by South China in the summer.

Following his release in the summer of 2011, Schütz moved to Azerbaijan Premier League side AZAL. After one season with AZAL, scoring 10 goals in 23 games, Schütz moved to fellow Baku based team Inter Baku where he scored twice in 15 games, both of which came in their Second qualifying round matches against Asteras Tripoli of Greece.[3][4]

After being released by Inter Baku,[5] Schütz signed with Biu Chun Rangers on 19 September 2013.[6] 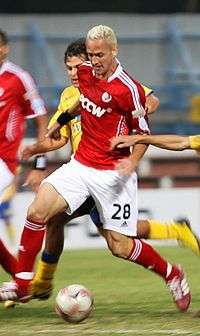