This is a Chinese name; the family name is Kwok.

He was promoted from the youth team of South China.

He made his debut for the club in the 2003–04 season when he was 15 years old. The opponent of the First Division match was Fire Services.

In the 2009 AFC Cup, he scored the opening goal with a header against Home United FC in the second round match, paving the way for South China's 4:0 victory.[1] His performance in the match was described by coach Kim Pan-Gon as beyond imaginations, as he has been frozen out for much of the season due to poor form and the abundance of attacking talent in the South China squad.[2]

Kwok Kin Pong scored the third goal for South China in the away game to FK Neftchi Farg'ona in the 4:5 defeat.[4]

Kwok was chosen, along with teammate Au Yeung Yiu Chung, to train with Tottenham Hotspur's first team in October 2010 for a week, as part of their development. The visit represents part of Spurs' commitment to supporting the development of the club's partners and support for football development in Hong Kong and China.[5] Upon his return, he promptly scores a goal against Tai Po FC at the 38-minute to help South China to an eventual 2:1 victory.[6]

In the 2011 AFC Cup, Kwok Kin Pong scored the equalising goal for South China in the away game to East Bengal FC, but in the end the match ended 3:3.[8]

Be the captain of Hong Kong Pegasus 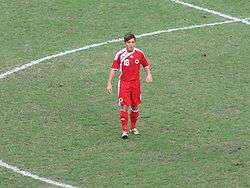 Kwok Kin Pong was a member of the Hong Kong national under-23 football team that won the 2009 East Asian Games gold medal.

Despite missing the Long Teng Cup in Taiwan due to his training opportunity at Tottenham Hotspur, Kwok Kin Pong was named in the squad for the 2010 Asian Games.[9] In the tournament, he helped Hong Kong progress to the second round for the first time in 52 years.