Tejay van Garderen (born August 12, 1988) is an American professional cyclist for BMC Racing Team.[2] He lives in Lucca, Tuscany, Italy, during the season.[3]

Van Garderen was born in Tacoma, Washington, but spent most of his childhood in Bozeman, Montana. His father is Dutch and he speaks the Dutch language quite well.[4] He began riding at 10. By 14, he nearly beat two hours at the Mount Evans Hill Climb, a 28-mile climb gaining nearly 7,000 feet.[5] He won 10 junior national titles in road (road race, criterium and TT) and cyclo-cross.[6] Two of his early teams were the Team Rio Grande Racing developmental squad (2004–2005; Fort Collins, Colorado)[7] and Team 5280 Magazine developmental squad (2005–2006, now part of Cannondale–Drapac; Boulder, Colorado).[8]

Van Garderen joined the Rabobank Continental Team in 2008. He lived in the Netherlands and came second in the Flèche du Sud and Circuito Montañés. He won a stage of the Tour de l'Avenir and came 24th in the Under-23 World Road Championship in Varese, Italy. 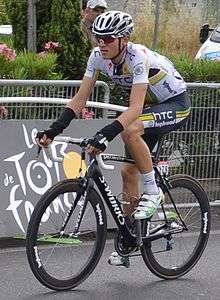 Van Garderen came to a team with most wins in 2009 thanks to prolific sprinters Mark Cavendish and Andre Greipel. He finished 9th in his first stage race, the Volta ao Algarve, climbing to 5th place on the third stage to the Alto do Malhao summit. In the 2010 Tour of Turkey, he came second on two stages and second overall, 29 seconds behind Giovanni Visconti.

Van Garderen supported leader Michael Rogers over the 6th and 8th stages of the 2010 Tour of California. He finished 28th overall and Rogers won.

Van Garderen started the 2010 Critérium du Dauphiné as joint leader of Team HTC–Columbia with Kanstantsin Sivtsov and Peter Velits. After nearly upsetting Alberto Contador in the prologue, he came 4th in the Stage 3 time trial to move to 2nd overall. He lost time on mountain stages and finished 3rd.

Van Garderen rode a strong Vuelta a España with having a very strong first 2 weeks of the race. His level of performance dropped after that but was still a valuable domestique to Peter Velits, who went on to a third place overall in the race.

In 2011, Van Garderen got second place on stage 3 of the Volta ao Algarve[11] and second place in the opening time trial in the Tour de Suisse (behind Fabian Cancellara of Leopard Trek).[12] His strong showing in the 2011 Tour of California also earned him the best young rider jersey. He was chosen to be a part of the 2011 Tour de France squad. This was Van Garderen's first Tour de France and he was riding in support of Tony Martin and Peter Velits.[13] In the 8th Stage, Van Garderen won enough points on a Category 2 climb to earn a King of the Mountains jersey and Most Aggressive Rider honors. He was the first American to wear the King of the Mountains jersey in the history of the Tour de France (Greg LeMond briefly led the mountains classification during the 1986 Tour de France, but since he was also the overall leader at the time, he did not wear the mountains jersey). During his dramatic stage 8 ride, he was referred to as the "Bozeman Boss" by commentator Phil Liggett.[14] He would finish in 82nd place. At the Tour of Utah, Van Garderen won the time trial in the third stage.[15] 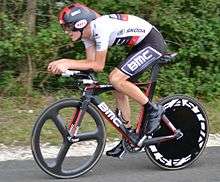 After HTC–Highroad was disbanded, Van Garderen joined BMC Racing Team along with his HTC team-mate Marco Pinotti.[2] Van Garderen won the young rider's jersey at Paris–Nice in early March,[16] having held the jersey for the entire race.

Van Garderen was selected for the Tour de France as one of the main domestiques for defending champion Cadel Evans. He enjoyed a strong first week, coming fourth in the prologue and wearing the white jersey – for the best-placed rider aged 25 or under in the general classification – until stage 7, where he lost time on the first summit finish of the Tour. He regained the jersey with fourth place on Stage 9, an individual time trial. On Stage 11, Van Garderen attempted to help Evans in an unsuccessful long range attack by breaking away from the yellow jersey group minutes before his leader did, but the attempt orchestrated by BMC Racing Team was foiled. He proved stronger than Evans on that day, pacing his leader up the final climb. He would go on to finish in fifth place overall while becoming the third American to win the Best Young rider classification, after Greg LeMond in 1984 and Andrew Hampsten in 1986. In August, Van Garderen finished second in the USA Pro Cycling Challenge behind Christian Vande Velde (Garmin–Sharp).[17] He had previously won the second stage of the race in a two-men sprint with Vande Velde, earning the yellow jersey in the process.[18] He would surrender the jersey to his fellow countryman the next day, take it back on stage 4 and finally lose it on stage 6.

Van Garderen opened his 2013 campaign with the Tour de San Luis, where he finished second in the overall standings. He also showed strong appearances as the European cycling season opened in March, finishing Paris–Nice in fourth,[19] and Critérium International in third place.[20] In May, Van Garderen won the first major stage race of his career, the Tour of California.[21] He performed well in all the key stages, coming in second at stage two's hilltop finish,[22] then winning the individual time trial on stage 6.[23] He topped it off by defending the lead on stage 7, a mountaintop finish to Mount Diablo.[24] He somewhat lacked form at the 2013 Tour de France, finishing in 45th position.[25] He then went on to win the USA Pro Cycling Challenge, which included a lot of high altitude racing across Colorado.[26]

In 2015, Van Garderen started his season at the Tour of Oman, where he took second place behind Rafael Valls.[28] He reaped his first victory of the year on the fourth stage of the Volta a Catalunya, which was the queen stage. However, he was too far down in the overall standings to affect the general classification.[29] In June, he rode the Critérium du Dauphiné as a preparation for the Tour de France. He battled with Chris Froome who edged him in the overall classification by ten seconds and finished second.[30]

In spite of a strong first two weeks,[31] he abandoned the 2015 Tour de France during Stage 17 due to illness a day after the second rest day. At the time of his abandon, he was in third place overall.[32]