Tanjore district This airport was established by the British during World War II and was primarily used by the British Airforce during the world wars. Damaged aircraft that landed at the airport were taken to a workshop in Ponmalai, 2 km away, repaired and brought back into service. The airport was given permission for civilian operations after the war ended.

Air Ceylon (Sri Lankan Airlines)[8] began operations in the late 1940s while Indian started services in the 80s.[9] The airlines operated flights from Trichy to Colombo through Jaffna.

This was a Customs Airport until 4 October 2012, when it was given an International Airport status by the Ministry of Civil Aviation.[3][10] The Indra ATS Automation system was installed at Trichy in April 2012 to help air traffic control increase safety and security. 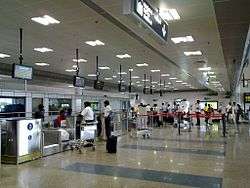 The old terminal was converted into an international cargo complex at a cost of R10 million.[15] The 4,000 m2 (43,000 sq ft) cargo complex was commissioned for operations on 21 November 2011.[11] The Central Board of Excise and Customs had earlier approved and notified the airport as an air cargo complex.[16] The one-time holding capacity of the cargo terminal is 250 metric tonnes [17] The airport is the gateway for foreign export as there is no easy way for export from the central region of Tamil Nadu.[18]

On 11 October 2013, a five-metric ton capacity cold storage facility was inaugurated at the cargo section. This facility will be helpful during flight delay, flight cancellation, advance booking and holiday bookings of cargo.[19]

Tiruchirapalli Airport has been undergoing expansion since 2004. The runway was extended from 1,829 m (6,000 ft) to 2,480 m (8,136 ft), apron expanded to hold 10 aircraft, fire station upgraded, a new taxiway and integrated passenger terminal were constructed.

The proposed Phase 2 expansion on 210 hectares (510 acres) by AAI includes extending the runway to 3,810 m (12,500 ft), construction of a modern air traffic control (ATC) tower, additional building complex and other works.[22] The state government has agreed to provide land free to AAI for the expansion.

The AAI has sought around 510 acres of land for the current expansion. Of the total about 188 acres are dry land, 116 acres wetland, 164.68 acres defense land, 40.59 acres wasteland and 5.80 is with Hindu religious and Charitable Trust. To facilitate fast process on airport expansion a joint technical advisory committee involving the departments of agriculture, public works department and revenue had been formed chaired by P. Kumar, Trichy MP. The district administration has formed a special team comprising the airport director, revenue divisional officer, joint director of agriculture, officials of Public Works Department, and other agencies concerned to expedite the land acquisition process.

According to the committee, the land acquisition is decided to be carried out in three phases. In the first phase the lands on either side of the existing runway is to be acquired immediately. In the second phase, acquisition of wet and dry land could be taken up. In the third phase the defence land could be acquired.[24] In 2012, it was decided to acquire the defense land first, as there is consistent agitation from the farmers for acquiring farm lands; later on the remaining lands would be acquired.[25]

Considering the growing potential of Trichy airport AAI has decided to expand the runway to around 3,200 m (10,500 ft) initially from the existing 2,480 m (8,136 ft) and later to 3,800 m (12,500 ft). It has sought land to the state government and still the response is awaited and once land has been sought the expansion would take place. The district administration has expressed its willingness to pay the market price for the land to be acquired.But the present government does not show any consideration in extending the runway of this airport [26]

Due to the consistent increase in the air traffic, the integrated passenger terminal building having a total floor area of 11,777 m2 (126,770 sq ft) to handle 470 peak-hour passengers has become insufficient. Hence the Ministry of Civil Aviation has initiated the action to expand the terminal by constructing additional 17,920 m2 (192,900 sq ft) area to enhance the passenger handling capacity to 1075 peak-hour passengers. The AAI has planned to construct a new terminal building, Air Traffic Control - ATC Tower, Airport Staff quarters, CISF staff quarters at cost of Rs.862 crore in Trichy international airport campus. For the same the detailed project report has been prepared and tender has been floated .[27][28]

AAI has gone for the extension of apron and construction of ramp equipment area measuring 2,800 sq ft. at an estimated cost of Rs. 20 million.[29] The construction work is in the final stages and the airport authority is waiting for the nod of Director General Civil Aviation for commissioning the seventh bay along with the apron area.[30] Further action has been initiated by the Ministry of Civil Aviation to expand the apron to provide two more aircraft bays, increasing the bays count to nine.[28] 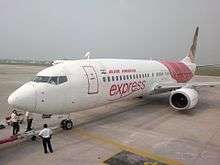 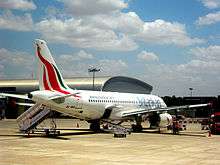 A SriLankan Airlines Airbus A320 at the gate

The airport is home to a flying training academy promoted by the VKN Group,[32] operating out of a 10,000 sq. ft. plot on the airfield with five glass cockpit equipped four seater Cessna 172 R aircraft.[33] The academy provides training for two types of licence: