The airport commenced operations in 1940 as a civil aerodrome with Indian Airlines operating Fokker F27, Douglas DC-3 and later Hawker Siddeley HS 748 aircraft.[6] Beginning with services to Chennai and Bangalore, other destinations like Cochin and Mumbai were added later. The airport was modernized with an extended runway to accommodate larger aircraft like the Boeing 737 and was reopened in 1987. The Sulur Air Force Base located further east of Coimbatore was temporarily used for civil aviation during this period. As of 2012, the airport is served by more than ten domestic and international carriers.

The Prime Minister of India declared the government's intention to upgrade Coimbatore Airport to International status in a meeting with senior ministers on 6 June 2012[7] and the Union Cabinet granted it the status of international airport on 2 October 2012.[8]

The airport has a parking management system with a capacity to accommodate nearly 300 cars.[11] There are two hangars in the airport; one provides housing for the planes of Coimbatore Flying Club, the other provides shelter for private carriers.

The further proposed expansion of the airport includes extension of runway to 12,500 ft (3,800 m) to accommodate larger aircraft such as the Boeing 747 and Airbus A380 and construction of a parallel taxiway to the runway to minimize runway occupancy time and turnaround time of aircraft.[12] Two more parking bays will be added, raising the total number of bays to ten.

The airport is located on Avinashi Road about 10 km (6.2 mi) from the central bus station. Frequent bus services are available from Gandhipuram central bus station and also from other auxiliary bus stations at Singanallur and Ukkadam. The airport is 11 km (6.8 mi) from the major railway station, Coimbatore Junction and the nearest rail stations are at Singanallur and Peelamedu. Cab services, call taxis and auto rickshaws provide 24 hours commuting services to the airport.

Primarily a domestic airport, the airport had provisions for, and has been operating certain international flights primarily from Sharjah since the 1990s and from Singapore since 2006. Srilankan Airlines operated to Colombo before the service was suspended due to security concerns.[13] flyDubai has shown interest to connect to Dubai. Air Asia, an airline based at Kuala Lumpur has showed interest to connect the airport with flight services to Malaysia. Air Carnival, a regional airline commenced operations in July 2016 with the airport as a base.[14][15] The airport will become TruJet's base in the state when the airline expands its operations.[16] Regional carriers Air Pegasus and Air Kerala have shown interest in flying to the airport.[17]

An Air Costa Embraer E-190 at the airport 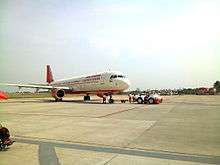 An Air India Airbus A321 at the airport