The United Kingdom general election of 1987 was held on 11 June 1987, to elect 650 members to the British House of Commons. The election was the third consecutive election victory for the Conservative Party under the leadership of Margaret Thatcher, who became the first Prime Minister since the 2nd Earl of Liverpool in 1820 to lead a party into three successive election victories.

The Conservatives ran a campaign focusing on lower taxes, a strong economy and strong defence. They also emphasised that unemployment had fallen below 3 million for the first time since 1981, and inflation was standing at 4%, its lowest level for some 20 years. The tabloid media also had strong support for the Conservatives, particularly The Sun, which ran anti-Labour articles with headlines such as: Why I'm backing Kinnock, by Stalin.

The Labour Party, led by Neil Kinnock, was slowly moving towards a more centrist policy platform. The main aim of the Labour party was, arguably, simply to re-establish themselves as the main progressive centre-left alternative to the Conservatives, after the rise of the SDP forced Labour onto the defence. Indeed, the Labour party succeeded in doing so with this general election. The Alliance between the Social Democratic Party and the Liberal Party was renewed but co-leaders David Owen and David Steel could not agree whether to support either major party in the event of a hung parliament.

The Conservatives were returned to government, having suffered a net loss of only 21 seats, leaving them with 376 MPs. Labour succeeded in resisting the challenge by the SDP-Liberal Alliance to replace them as the main opposition, and managed to increase their vote share in Scotland, Wales and Northern England. However, Labour still returned only 229 MPs to Westminster. The election was a disappointment for the SDP-Liberal Alliance, who saw their vote share fall and suffered a net loss of one seat as well as former SDP leader Roy Jenkins losing his seat. This led to the two parties eventually merging completely to become the Liberal Democrats. In Northern Ireland, the main unionist parties maintained their alliance in opposition to the Anglo-Irish Agreement, however the Ulster Unionists lost two seats to the Social Democratic and Labour Party. The election night was covered live on the BBC, and presented by David Dimbleby, Peter Snow, and Robin Day.[1] It was also broadcast on ITV and presented by Sir Alastair Burnet, Peter Sissons and Alastair Stewart.

The Conservatives' campaign emphasized lower taxes, a strong economy, and defence, and also employed rapid-response reactions to take advantage of Labour errors. Norman Tebbit and Saatchi and Saatchi spearheaded the Conservative campaign. However, when on 'Wobbly Thursday' it was rumoured a Marplan opinion poll showed a 2% Conservative lead, the 'exiles' camp of David Young, Tim Bell and the Young and Rubicam firm advocated a more aggressively anti-Labour message. This was when, according to Young's memoirs, Young got Tebbit by the lapels and shook him, shouting: "Norman, listen to me, we're about to lose this fucking election".[2][3] In his memoirs Tebbit defends the Conservative campaign: "We finished exactly as planned on the ground where Labour was weak and we were strong – defence, taxation, and the economy".[4] During the election campaign however Tebbit and Thatcher argued.[5]

Bell and Saatchi and Saatchi produced memorable posters for the Conservatives, such as a picture of a British soldier's arms raised in surrender with the caption: "Labour's Policy On Arms"—a reference to Labour's policy of unilateral nuclear disarmament. The first Conservative party political broadcast played on the theme of "Freedom" and ended with a fluttering Union Jack, the hymn I Vow to Thee, My Country (which she would later quote in her Sermon on the Mound) and the slogan: "It's Great To Be Great Again".

The Labour campaign was a marked change from previous efforts; professionally directed by Peter Mandelson and Bryan Gould, it concentrated on presenting and improving Neil Kinnock's image to the electorate. Labour's first party political broadcast, dubbed Kinnock: The Movie, was directed by Hugh Hudson of Chariots of Fire fame, and concentrated on portraying Kinnock as a caring, compassionate family man. He was particularly critical of the high unemployment that the Tory government's economic policies had resulted in, as well as condemning the wait for treatment that many patients had endured on the National Health Service. Kinnock's personal popularity jumped 16 points overnight after the initial broadcast.[6]

On 24 May, Kinnock was interviewed by David Frost and claimed that Labour's alternative defence strategy in the event of a Soviet attack would be "using the resources you've got to make any occupation totally untenable". In a speech two days later Mrs. Thatcher attacked Labour's defence policy as a programme for "defeat, surrender, occupation, and finally, prolonged guerrilla fighting...I do not understand how anyone who aspires to Government can treat the defence of our country so lightly."[7] 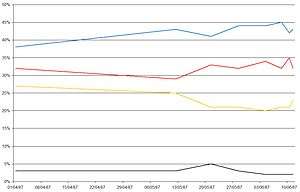 The Conservatives were returned by a second landslide victory with a comfortable majority, down slightly on 1983 with a swing of 1.5% towards Labour. Increasing polarisation marked divisions across the country: the Conservatives dominated southern England and took additional seats from Labour in London and the rest of the south, but performed less well in Northern England, Scotland, and Wales. Yet the overall result of this election proved that the policies of Margaret Thatcher retained significant support, with the Conservatives given a third convincing majority.

Despite initial optimism and the professional campaign run by Neil Kinnock, the election brought only twenty additional seats for Labour from the 1983 Conservative landslide. In many southern areas, the Labour vote actually fell, with the party losing seats in London. However, it represented a decisive victory against the SDP–Liberal Alliance and marked out the Labour Party as the main opposition to the Conservative Party. This was in stark contrast to 1983, when the Alliance almost matched Labour in terms of votes - although Labour had almost 10 times as many seats as the Alliance.

The result for the SDP–Liberal Alliance was a disappointment, in that they had hoped to overtake Labour as the second party in the UK in terms of vote share. Instead, they lost one net seat and saw their vote share drop by almost 3%, with a widening gap of 8% between them and the Labour party (compared to a 2% gap four years before). These results would eventually lead to the end of the SDP–Liberal Alliance and the birth of the Liberal Democrats.

In Northern Ireland, the various unionist parties maintained an electoral pact (with a few dissenters) in opposition to the Anglo-Irish Agreement. However, the Ulster Unionist lost two seats to the Social Democratic and Labour Party.

The election victory won by the Conservatives could also arguably be attributed to the big rise in average living standards that had taken place during their time in office. As noted by Dennis Kavanagh and David Butler in their study on the 1987 election,

"Since 1987 the Conservatives had located a large constituency of ‘winners,’ people who have an interest in the return of a Conservative government. It includes much of the affluent South, home-owners, share-owners, and most of those in work, whose standard of living, measured in post-tax incomes, has risen appreciably since 1979."[8]

All parties gaining over 500 votes listed. 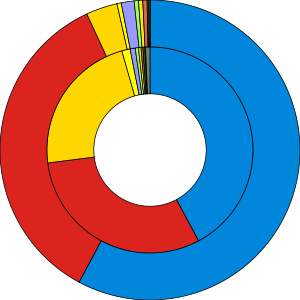 Seats won in the election (outer ring) against number of votes (inner ring).

The disproportionality of the house of parliament in the 1987 election was 17.82 according to the Gallagher Index, mainly between the Conservatives and the SDP-Liberal Alliance.

MPs who lost their seats