The 2008 United States Senate election in North Carolina was held on November 4, 2008. The Senate election coincided with the presidential, U.S. House elections, gubernatorial, Council of State, and statewide judicial elections. Incumbent Republican U.S. Senator Elizabeth Dole ran for re-election to a second term, but was defeated by Democrat Kay Hagan.[1] The November general election was the first time in North Carolina history, and only the eighth time in U.S. history, that the two major-party candidates for a U.S. Senate seat were both women. In addition, Hagan became the first Democrat to win this seat since it was won by the Republicans in 1972, and the first woman to defeat an incumbent woman in a Senate election.

Neal earned the endorsement of the Black Political Caucus of Charlotte-Mecklenburg. He also was endorsed by Blue America PAC, eQualityGiving, the Independent Weekly and YES ! Weekly.[9] 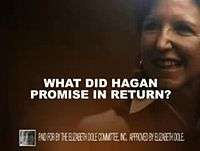 Hagan was initially given little chance against Dole, but Hagan was helped by independent 527 groups lobbying/advertising against incumbent Dole [8] The Democratic Senate Campaign Committee expended more money in North Carolina than in any other state during the 2008 election season.[8] However, Dole benefited from more out-of-state funding overall than Hagan.[12]

In late October, Dole released a controversial television ad attacking Hagan for reportedly taking donations from individuals involved in the Godless Americans PAC, a group which advocates for the rights of people who do not believe in God. The ad also included a female voice saying, "There is no God."[13][14] The Dole campaign said the ad correctly shows who Hagan will associate with in order to raise campaign funds, and on November 1, Bob Dole also defended it, asserting that "it never questions her faith," and that "the issue is why she was there. There's no question about her faith. I think it's [the ad's] fair game."[15]

Hagan, who is a member of the Presbyterian Church and a former Sunday school teacher,[14] condemned the ad as "fabricated and pathetic," and, according to Hagan's campaign website, a cease-and-desist letter was "hand-delivered to Dole's Raleigh office, faxed to her Salisbury office and sent to her home at the Watergate in Washington, DC."[16] Hagan also filed a lawsuit in Wake County Superior Court accusing Dole of defamation and libel.[17][18]

The ad has met exceptionally strong criticism from the public as well as many local and several national media outlets. CNN's Campbell Brown said about the ad: "[A]mid all the attack ads on the airwaves competing to out-ugly one another, we think we've found a winner."[19] The ad has been described as "ridiculously outrageous,"[20] "indecent,"[21] a "gross misrepresentation,"[22] "worse than dishonest"[23] and "beyond the bounds of acceptable political disagreement,"[23] among other harsh criticism.[24] Another ad issued by the Dole campaign in mid-October 2008 was described by The Fayetteville Observer as "[setting] the low mark in negative political campaigning."[25] The media reported, that within 48 hours of the first ad Hagan received over 3,600 contributions, including major donors as well as individual support from a range of atheists, agnostics and followers of other religious beliefs who felt they were being attacked by Dole.[26] Following the second ad Hagan's lead doubled according to some polls.[26]

In June 2008, Senator John Ensign of Nevada, the chairman of the National Republican Senatorial Committee, considered North Carolina to be one of the top ten most competitive Senate races of the year.[27] Later, CQ Politics rated this race as 'Leans Democratic'.[28] The Cook Political Report called it a 'Toss-Up'.[29] The Rothenberg Political Report considered it a 'Lean Takeover'.[30] 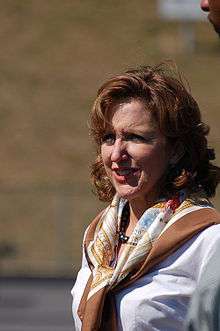 Hagan on the campaign trail

Polls released October 28 showed Dole and Hagan within the statistical margin of error (3% apart) and Dole garnering 4% of the vote.[2]

In the 2008 election, Dole lost by a wider-than-expected margin, taking only 44 percent of the vote to Hagan's 53 percent – the widest margin for a Senate race in North Carolina in 30 years, and the largest margin of defeat for an incumbent Senator in the 2008 cycle. It has been speculated that the outcry over the "Godless" ads contributed to Dole's loss.[32] Hagan trounced Dole in the state's five largest counties – Mecklenburg, Wake, Guilford, Forsyth and Durham. Hagan also dominated most of the eastern portion of the state, which had been the backbone of Helms' past Senate victories. While Dole dominated the Charlotte suburbs and most of the heavily Republican Foothills region, it was not enough to save her seat.