He began his political career in 1972 as an aide to the Massachusetts Governor's Council after graduating from Boston College, thanks to his connection with councilor Herb Connolly, whom Galvin had campaigned for. Galvin worked part-time at the Council while attending Suffolk Law School full-time.[1] Galvin won a special election to the open seat in the Massachusetts General Court in 1975, after State Representative Michael Daly departed from office; the race had nine candidates. Galvin became the Massachusetts state representative from the Allston-Brighton district, the same year he graduated from law school.[1] He was the Democratic nominee for Massachusetts State Treasurer in 1990, but was defeated by Republican Joe Malone.[1] He was first elected Secretary of the Commonwealth in 1994.[1]

At one point during the administration of Gov. Mitt Romney and Lt. Gov. Kerry Healey, Galvin became the Acting Governor of Massachusetts when both Romney and Healey were out of the state. During the administration of former Acting Governor Jane Swift, Galvin automatically became Acting Governor whenever Swift left the state, since there was no lieutenant governor in office at the time. When Swift gave birth to twins in 2001, she chose to keep full executive authority and did not hand over the governorship at any point to Galvin.[1] 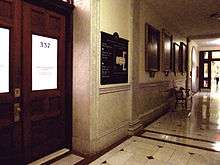 Galvin's office in the State House, 2010

While it had been widely rumored that Galvin would run for Governor of Massachusetts in 2006 as a Democrat, he announced at the end of 2005 that he would instead seek reelection as Secretary of State. Voting rights advocate John Bonifaz had already declared that he would run for the office, and stayed in the race to challenge Galvin for re-election. However, Galvin defeated Bonifaz in the September 19 Democratic primary. Galvin defeated Green-Rainbow Party candidate Jill Stein, a medical doctor and environmental health advocate who ran for Governor in 2002, in the November general election.

The Democratic primary race received relatively little attention or press coverage for most of 2006, but in the last few weeks before election, a controversy over Galvin's refusal to debate his opponent broke into the news with a front page story in the Boston Sunday Globe.[2] This is the first time a front page story appeared about this race in any major Boston paper.

Galvin, as the Massachusetts' Secretary of State, was found to have violated the Uniformed and Overseas Citizens Absentee Voting Act passed in 2002. The Office of the Secretary of the Commonwealth, since the law had been enacted, had failed to report and collect the number sent and the number returned of absentee ballots from overseas Military personnel registered to vote in Massachusetts. After an investigation by the US Justice Department, a settlement was reached, requiring Galvin to comply with the law. The law requires each state (or commonwealth) to report on the ballots no later than 90 days after the date of each regularly scheduled general election for federal office. Each state must also make such a report available to the general public. The Justice Department's Civil Rights Division enforces the UOCAVA and the Voting Rights Act.[3]

On January 14, 2009, Galvin filed suit against Robert Jaffe to compel Jaffe to testify about his role in the Bernard Madoff investment scandal. Jaffe, who lives in Weston, Massachusetts and in Florida, counters that he is actually one of the victims of Madoff.[4] Jaffe is married to Ellen Shapiro, daughter of Boston philanthropist Carl Shapiro. Jaffe reportedly convinced the elder Shapiro to invest $250 million with Madoff about 10 days before Madoff's arrest.[5][6]

Galvin resides in Brighton, Massachusetts with his wife, Eileen, and their daughter, Bridget. He owns a vacation home on Lake Winnipesaukee, in New Hampshire.