Secretary of State of Washington 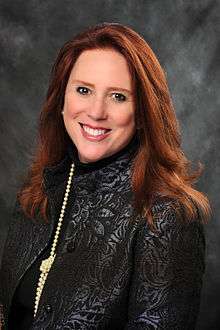 The current Secretary of State is Kim Wyman.

Keeper of the Seal

The Secretary of State is the keeper of the Seal of Washington, and is responsible for regulating its use, affixing it to commissions, pardons, and other documents to which the signature of the Governor is required, and filing and attesting to official acts of the Legislature and Governor.[1][2]

The office of the secretary is, generally, responsible for oversight of elections (individual county auditors manage candidate registration, ballot preparation, polling, and canvassing), principally by accrediting the balloting procedures used by each county, certifying the results of elections, verifying petition signatures used to qualify initiatives and referenda, and distributing the state voter's pamphlet and official notice of elections advertisements. (Lobbying and campaign finance issues are separately regulated by the Washington State Public Disclosure Commission.[6])

The Corporations Division of the Office of the Secretary of State[7] is responsible for registering limited partnerships, limited liability partnerships, corporations, and limited liability companies.[8] The Secretary also regulates charities and charitable trusts,[9] including registering individuals, organizations and commercial fundraisers involved in charitable solicitations.

The State of Washington has had a total of fifteen Secretaries of State:[12]