This article is about the Tokyo ward. For other uses, see Ohta.
Not to be confused with Ōta, Gunma. 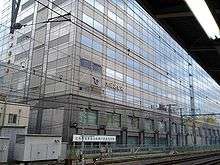 Ōta (大田区, Ōta-ku) is a special ward located in Tokyo Metropolis, Japan. In English, it calls itself Ōta City.

Ōta's hub is situated around the two stations Kamata and Keikyū Kamata, where the Ōta Ward Office and central Post Office can be found.

The ward was founded on March 15, 1947 merging the old wards of Ōmori and Kamata.

Haneda Airport (HND), now the main domestic airport for the Greater Tokyo Area, was first established as Haneda Airfield in 1931 in the town of Haneda, Ebara District of Tokyo Prefecture. In 1945, it became Haneda Army Air Base under the control of the United States Army. In the same year, the Occupation ordered the expansion of the airport, evicting people from the surroundings on 48 hours' notice. With the end of the occupation, the Americans returned part of the facility to Japanese control in 1952, completing the return in 1958. Haneda Airport in Ōta was the major international airport for Tokyo, and handled traffic for the 1964 Tokyo Olympics.

The city is run by a city assembly of 50 elected members. The current mayor is Tadayoshi Matsubara.

The southernmost of the 23 special wards, Ōta borders the special wards of Shinagawa, Meguro and Setagaya to the north, and Kōtō to the east. Across the Tama River in Kanagawa Prefecture is the city of Kawasaki, forming the boundaries to the south and west.

The following companies have their headquarters in Ōta.

The ANA subsidiary ANA Wings has its corporate head office on the airport property.[1]

Prior to the merger with Japan Airlines,[10] Japan Air System had its headquarters by Tokyo International Airport in Ōta.[11]

Before its dissolution, Galaxy Airlines was headquartered in the ARC Building on the airport grounds.[15]

The following public high schools are located in Ōta, operated by the Tokyo Metropolitan Government Board of Education.

Previously the Deutsche Schule Tokyo was in the ward.[17] The school is now in Yokohama.

The city operates several libraries, including:[18]

Ōta has a sister city relationship with Salem, Massachusetts. The discovery of a shell mound in Ōmori, one of the forerunners of Ōta, by Edward S. Morse, director of the museum in Salem, occasioned the tie. Ōta has a friendship link with Chaoyang District, Beijing, China.