Keisuke Honda (本田 圭佑, Honda Keisuke, born 13 June 1986) is a Japanese footballer who plays for Serie A club Milan and the Japan national football team. He plays as an attacking midfielder, but he can equally play as a winger or as a deep-lying playmaker.[3] Honda has frequently featured as a right winger in the 2014–15 Serie A season. He is also known for his accuracy from free-kicks, dribbling ability, and delivery as a dead ball specialist.

He has earned over 60 international caps since 2008, playing at the 2010 FIFA World Cup, the 2014 FIFA World Cup and winning the 2011 AFC Asian Cup, where he was also voted Player of the Tournament.

Born and raised in Osaka, Honda had belonged to the local junior youth team at Gamba Osaka, but was not promoted to the youth team.[4] After graduating Seiryō High School, Honda began his professional career in 2004, with J1 League side Nagoya Grampus.

On 16 January 2008, Honda signed a two and half-year deal with Eredivisie side VVV-Venlo.[5][6] In his first six months at VVV, he experienced relegation for the first time in his professional career as his new side went down to Eerste Divisie, the second division. In the 2008–09 season, he scored 16 goals in 36 league appearances to help the team back into the Eredivisie.[7] He became known as Keizer Keisuke (meaning Emperor Keisuke) among the club's fans.[8] Also, Honda introduced his agent, Tetsuro Kiyooka to Maya Yoshida in 2008 and led him to VVV-Venlo two years later.[9] 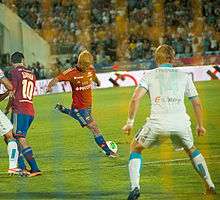 Honda scoring for CSKA in the Russian Super Cup 2013

At the end of December 2009, Honda transferred to Russian club CSKA Moscow.[10] Honda signed a 4-year contract.[11] The transfer fee was undisclosed, but VVV-Venlo was said to be very content with the fee as it almost matched their asking price; it is believed to be in the region of €6 million.[8] Honda made his debut for CSKA in the UEFA Champions League match against Sevilla.[12] In the second leg in Seville, he scored the winning goal through a direct free kick for CSKA after having set up the first goal for Tomáš Necid. This secured a 2–1 (3–2 aggregate) victory to send the club to the quarterfinals, making Honda the first Japanese player to be in the quarter-finals as well as the first to score in the knock-out stages. Honda scored his first league goal on 12 March 2010, in the home match against Amkar Perm. He scored the goal in the third minute of injury time, slotting home a pass from Necid with his left. With the goal, he secured the win for CSKA Moscow.

Honda picked up his first piece of silverware with CSKA on 22 May 2011, coming on as a second-half substitute for Alan Dzagoev in a 2-1 defeat of Alania Vladikavkaz in the Russian Cup final.[13] He netted two goals in the first half of CSKA's match against Krylia Sovetov three days later, a match that ended in a 3-0 victory for his side.[14] On 16 September 2012, Honda scored twice off of passes from Ahmed Musa, scoring the only goals in a league victory over Alania.[15]

On 13 July 2013, Honda scored CSKA's first and third goals in the club's 3-0 victory over Zenit in the Russian Super Cup match in Rostov.[16] In 2013 summer transfer window, he entered the final six months of his contract with CSKA and became free to talk to other clubs, expressing his interest in moving to a bigger club. On 11 December 2013, CSKA announced the conclusion of Honda's time at the club.[17]

On 12 January 2014, Honda made his debut coming on as a substitute for Robinho in a 4–3 Serie A defeat to Sassuolo. On 15 January, Honda made his full debut for Milan,[22] scoring in the 3–1 Coppa Italia quarter-final win against Spezia.[23] He scored his first Serie A goal in Genoa-Milan, which was won by the Rossoneri 1-2.[24] Honda's contribution for Milan in the latter half of the 2013–14 season was considered disappointing, and he himself stated that "this is not me".[25]

On 31 August 2014, Honda scored for Milan against Lazio, netting the club's first goal of the season as the Rossoneri won 3–1 in Filippo Inzaghi's Serie A debut as manager.[26] Honda went on to score Milan's second goal against Parma on 14 September, helping Milan to win a nine-goal thriller, 5-4.[27] Honda provided an assist for Giacomo Bonaventura's opening goal and scored a bullet header to restore Milan's lead, from Ignazio Abate's cross.[28] In Milan's next match against Empoli, Honda drilled in a shot on the edge of the box equalizing for Milan as the sides drew 2–2.[29] Honda scored with a precise free kick over the Chievo wall in a 2–0 win on 4 October.[30] Honda scored his first brace playing for Milan in a 3-1 away win against Verona on 19 October. 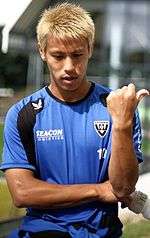 Honda during the training session at the De Koel stadium

He was a member of the Japan team for 2005 FIFA World Youth Championship and played for the U-23 national team, that qualified for 2008 Summer Olympics football tournament finals. He made a full international debut for Japan on 22 June 2008 in a FIFA World Cup qualifier against Bahrain. On 14 July 2008, he was formally named as one of the midfielders of the Japanese U-23 national football team for the Beijing Olympics football competition.[31] He scored his first goal for the senior national team on 27 May 2009 in a friendly match against Chile at Nagai Stadium in Osaka and has since been given the nickname "Emperor Keisuke". He has scored 20 goals in 52 games for the Japan national football team from his debut in 2008, onwards.

Honda scored the only goal in Japan's 2010 FIFA World Cup match against Cameroon, finishing off Daisuke Matsui's cross into the top left corner of the net.[32] His performance in the game gained him the Man of the Match Award from FIFA and the 1-0 victory was Japan's first World Cup triumph on foreign soil.[33] In the final group-stage game against Denmark, he scored a magnificent free kick in the 17th minute from 30 yards out.[34] He then turned provider for Shinji Okazaki after making his way into the penalty area, with a Cruyff Turn that beat a Denmark player, in the 88th minute to make the score 3–1 to Japan, a performance that earned him the "Man of the Match" award once more and qualified Japan for the knockout stage.[35] In their round of 16 matchup, Japan were eliminated by Paraguay, falling 3-5 in penalty kicks after the game finished goalless through extra time.[36]

Jonathan Wilson of The Guardian cited him as a 'false nine': a player superficially employed as a centre forward but moving deeper to pull the opposition defence around the pitch.[37]

Honda was included in the 2011 AFC Asian Cup by coach Alberto Zaccheroni. In the game against Syria, he scored a penalty kick making the score 2–1 for Japan. In the semi-finals against South Korea, he took a penalty kick, but was blocked by Jung Sung-Ryong. However, in the penalty shoot out of the game, he scored and was named "Man of the Match."[38] Honda was awarded the most valuable player of the 2011 AFC Asian Cup as Japan lifted a record fourth continental title.[39]

Honda missed the majority of the third round of AFC World Cup qualification due to injury he picked up while playing for his club.[40]

During the fourth round of qualifying, on 3 June 2012, in Japan's first game in Group B against Oman, Honda scored a beautiful volley just eleven minutes into the game. The game ended in 3–0 a win for Japan.[41] He continued his scoring streak against Jordan on 8 June 2012, managing to net a hat-trick; Japan went on to win 6–0.[42] He also played a crucial role during their 1-1 draw with Australia on 12 June 2012, during a corner kick, he assisted a goal which was scored by Yuzo Kurihara.[43]

He missed a couple of friendly games and one qualification game due to injury from club duty and was subsequently not included in the squad that was shocked 2-1 by Jordan on 26 March 2013.[44][45] Although not 100 percent fit, Honda was named in the squad for the game against Australia on 4 June 2013, having just won the Russian Cup with his club.[46] All Japan needed from this match was a draw to secure their place for Brazil. He managed to score a goal via penalty kick during extra time from a handball from Matt McKay, making the score 1–1.[47] The result secured Japan's qualification for the World Cup in Brazil and became the first nation to book their place at the tournament.[48]

Having won the 2011 AFC Asian Cup, Japan qualified for the Confederations Cup in Brazil in 2013 and Honda was once again included in Zaccheroni's squad for the tournament.[49] After losing 3-0 to hosts Brazil in the first group match on 15 June 2013,[50] Japan faced Italy in the next game; Honda scored from the penalty spot to put Japan ahead but they fell 4-3 in a pulsating game which dumped the Asian champions out of the competition.[51]

Japan was drawn into Group C in the 2014 FIFA World Cup in Brazil having to face Colombia, Greece, and Ivory Coast. In Japan's opening game against Ivory Coast, Honda collected a pass from Yuto Nagatomo after a quick throw-in and scored with a left footed shot in the 16th minute of the game. With this goal Honda became the first Japanese player to score in two World Cups, and also claimed sole possession of being the top Japanese scorer in FIFA World Cup history with three total goals. Japan went on to lose 2–1 to the African team.[52]

Honda was included in Javier Aguirre's 23-man squad for 2015 AFC Asian Cup. Honda started Japan's opener match against Palestine and scored a penalty kick in their 4–0 win. In next match against Iraq, Honda again netted a penalty which Japan won the match 1–0 and the first goal in 2–0 win of Jordan.

Honda participated in Japan's quarter final match against the United Arab Emirates. After the match ended 1–1 after extra time Honda, who was Japan's first kicker in the penalty shootout, missed his kick, shooting above the crossbar, as Japan ended up losing the shootout 5–4.

Coming from a sporting family, Keisuke Honda's older brother was also a footballer. Honda's great-uncle Daisaburo was a canoeist who represented Japan in the 1964 Tokyo Olympics. Keisuke Honda's cousin is Tamon Honda, a professional wrestler and former Olympic wrestler, who participated in three Olympic Games in freestyle wrestling in 1984, 1988, and 1992.[53] He married Misako, a kindergarten teacher, the couple have a son together.