Atsuto Uchida (内田 篤人, Uchida Atsuto, born 27 March 1988) is a Japanese professional footballer, who plays for FC Schalke 04 and the Japan national football team as a right back.

Uchida was educated at and played for Shimizu Higashi High School prior to joining the Kashima Antlers in 2006.[3] On 5 March 2006, Uchida began his professional career when he debuted for Kashima at the age of 17 in the season-opener against Sanfrecce Hiroshima, since which he has remained a fixture in the starting eleven.[4] His first goal as a professional footballer came on 21 March 2006 when he scored against Ventforet Kofu. He was also selected by popular vote to play in the 2006 J. League All-Star Soccer game. On 13 June 2010, German club FC Schalke 04 announced that they had signed the Japanese international to a three-year contract.[5] On 13 April 2011, Uchida became the first Japanese footballer to play for a team that reached the semi-finals of the Champion's League. On 18 September 2013, he scored his first goal in the Champions League in a 3-0 win against Steaua Bucuresti. 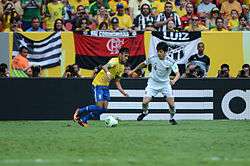 Uchida defending Neymar during a match at the Confederations Cup in 2013.

In 2006, Uchida received an international call-up from national coach Ivica Osim but did not play any game. Uchida finally made a full international debut for Japan on 26 January 2008 in a friendly against Chile at National Olympic Stadium in Tokyo. This was the first match under the reign of new manager Takeshi Okada. On 6 February 2008, Uchida played 90 minutes for Japan in a 4–1 win against Thailand and became the first teenage Japanese footballer to play FIFA World Cup qualification after the establishment of the J. League in 1993. On 22 June 2008, Uchida scored the winner in a 1–0 win against Bahrain.[7] It was his first international goal and Uchida became the youngest Japanese goalscorer in FIFA World Cup qualification at age 20 years and 87 days, beating an 11-year-old record that was held by Hidetoshi Nakata. Uchiha was a member of the Japan team for the 2008 Summer Olympics squad, the 2010 World Cup squad, winning team of the 2011 AFC Asian Cup, the 2013 Confederations Cup squad, and the 2014 World Cup squad.[8]

Uchida provided the voice for a character named Uschi, who is named after him, in the Pokémon movie Diancie and the Cocoon of Destruction.[12]