The Airmen of Note 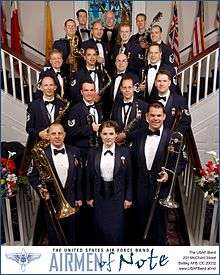 Through the years, the Airmen of Note has presented jazz performances to audiences throughout the United States as well as dozens of countries in Europe and Asia. The “Note” routinely produces broadcasts and recordings that are heard on hundreds of media outlets worldwide. Airmen of Note recordings have proven to be among the most popular jazz recordings in the United States, with one release having achieved number two on the JazzWeek Jazz album chart.[3][4][5] In the 1954 the Airmen of Note played Miller's band in the The Glenn Miller Story movie.

Throughout the history of the Airmen of Note, the Glenn Miller sound has remained a central ingredient in the band’s musical heritage. However the “Note” began to adopt a more contemporary sound in the 1950s and 1960s due largely to their stable of staff arrangers, including Sammy Nestico. Over the past four decades, Mike Crotty and current chief arranger Alan Baylock have continued the band’s commitment to tradition and musical innovation. To augment its writing staff, the Airmen of Note has commissioned works by such arrangers as Bob Florence, Bob Mintzer, Rob McConnell and Bill Holman. Sammy Nestico and fellow Note alumnus Tommy Newsom have each composed works for the group as well. [6][7]

The Airmen of Note is a leading force in music education. Many of its members are accomplished clinicians with extensive backgrounds in music education. They routinely lead clinics at high schools and colleges across the country, and are frequently invited to perform at national music conventions, including the International Association of Jazz Educators, Music Educators National Conference, and The Midwest Clinic. [10]

The Airmen of Note have recorded and performed with such luminaries as Allen Vizzutti, Dizzy Gillespie, Joe Williams, Sarah Vaughan and Nancy Wilson. In 1990, the Airmen of Note established the Jazz Heritage Series, featuring the “Note” in concert with icons of jazz. Artists that have joined the “Note” for the program include Al Jarreau, Clark Terry, Phil Woods, Kurt Elling, Kurt Rosenwinkel, Paquito D’Rivera, Nicholas Payton and Karrin Allyson. Each year, the Jazz Heritage Series is broadcast over National Public Radio, independent jazz radio stations, satellite radio services and the internet.