Air Education and Training Command (AETC) was established 1 July 1993, with the realignment of the former Air Training Command and the extant Air University. It is one of the U.S. Air Force's ten major commands (MAJCOMs) and reports to Headquarters, United States Air Force.

More than 48,000 active duty and Air Reserve Component members and 14,000 civilian personnel make up AETC. The command has responsibility for approximately 1,600 aircraft.

AETC's mission is to "recruit, train and educate Airmen to deliver air power for America."

AFRS recruitment of commissioned officers is limited to 4-year college/university graduates via Air Force Officer Training School (OTS). Individuals who desire to become commissioned USAF officers and enter the service via the U.S. Air Force Academy (USAFA) and Air Force ROTC (AFROTC) are not recruited by AFRS and are instead accessed via recruitment and application activities of USAFA and AFROTC, respectively.

The Air Education and Training Command, along with the USAF Academy, are responsible for teaching these principles throughout the Air Force.

When AETC was established in 1993, Nineteenth Air Force (19 AF) was also established as a companion numbered air force to 2 AF within AETC. While 2 AF focused on ground-based technical training, 19 AF focused on all undergraduate flying training and those formal training units (FTU) under its claimancy from 1993 until 2012. On 12 July 2012, 19 AF was inactivated for budgetary reasons in an effort to gain efficiencies. By 2014, these efficiencies had failed to materialize and the Commander of AETC, Gen Robin Rand, directed reestablishment of 19 AF effective 1 Oct 2014 for the oversight of all flight training operations under AETC's claimancy.[4][5][6]

Between 1994 and 2013, USAF students in JSUPT also accomplished primary training in the T-34C Turbomentor and later the T-6B Texan II with Training Air Wing FIVE at Naval Air Station Whiting Field, Florida via a combination of USN, USAF, USMC and USCG flight instructors. This program was terminated on 25 July 2013 with the graduation of the final USAF student pilot from primary training at NAS Whiting Field.[7]

The entire ENJJPT course lasts about 54 weeks and students learn with, and are taught by, officers of the U.S. Air Force and various European air forces. During the primary phase, students master contact, instrument, low-level and formation flying.

After the primary phase of JSUPT and ENJJPT, student pilots elect one of two advanced training tracks based on their class standing. Those qualified for fighter or bomber assignments are assigned to the fighter/bomber track and train in the T-38 Talon at the JSUPT and ENJJPT bases. Following completion of the fighter/bomber track, graduates will be assigned to the A-10, F-15 Eagle, F-15E Strike Eagle, F-16, F-22 and F-35, B-1, B-2 or B-52.

NOTE: The U-2 is not an option for new graduates of the Fighter/Bomber track. Prospective U-2 pilots must be qualified in another fighter, bomber, reconnaissance or mobility aircraft before applying to fly the U-2. First Assignment Instructor Pilots (FAIPs) are also eligible to apply following their FAIP assignment.[8]

Prior to mid-2012, some USAF student pilots selected for the airlift/tanker track with specific assignment to the C-130 Hercules or its variants (special operations, electronic warfare, combat rescue, weather reconnaissance, etc.) were assigned to a multi-engine turboprop track flying the T-44 Pegasus and/or TC-12B Huron at NAS Corpus Christi, Texas in a cooperative arrangement between AETC and the Naval Air Training Command / Chief of Naval Air Training (CNATRA). These USAF students received instruction from a combination of USN, USAF, USMC and USCG flight instructors with Training Air Wing FOUR at NAS Corpus Christi. This program was discontinued in 2012 and all USAF student pilots slated for the C-130 and its variants now train in the T-1A at one of the three JSUPT bases.

NOTE: The 55th Wing's (55 WG) E-4B National Air Operations Center (NAOC) aircraft and any of the Special Air Mission (SAM) aircraft operated by the 89th Airlift Wing (89 AW), e.g., VC-25/Air Force One, C-32, C-40, etc., are not options for new graduates of the Airlift/Tanker track. Prospective E-4 and VC-25/C-32/C-40 pilots must be qualified in an airlift, tanker, or other intelligence, surveillance and reconnaissance (ISR) aircraft before applying to fly the E-4 or any SAM aircraft.

Those USAF student pilots selected to fly helicopters or tilt-rotor aircraft are assigned directly to the helicopter track, by-passing the primary phase of JSUPT and ENJJPT in the T-6A. These students initially fly the TH-1 Huey at Fort Rucker, Alabama under AETC's 23d Flying Training Squadron. USAF graduates of this program will fly the UH-1N Twin Huey, HH-60G Pave Hawk or CV-22 Osprey. 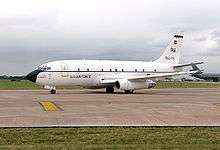 A T-43A of the 562d Flight Training Squadron taxiing at RAF Fairford, England

At the same time, a pre-selected cohort of USAF officer student navigators destined as weapon systems officers in the F-15E Strike Eagle, the B-1 Lancer, and, with the retirement of the EF-111 Raven, electronic warfare officers providing USAF manning of joint USN-USAF EA-6B Prowler squadrons, would complete a joint flight training program established between 19 AF and the Naval Air Training Command / Chief of Naval Air Training (CNATRA) with Training Air Wing SIX at Naval Air Station Pensacola, Florida. In this latter program, prospective USAF WSOs and EWOs would follow essentially the same training track as USN and USMC Student Naval Flight Officers destined for tactical fighter, strike and electronic attack aircraft, flying the T-34C Turbomentor in primary training until the T-34C's replacement by the T-6 Texan II, USAF T-1 Jayhawk aircraft on detached operations at NAS Pensacola, and USN/USMC T-39 Sabreliner aircraft in intermediate and advanced training under the tutelage of USN, USAF and USMC instructors.

In 2009, with the transition of all USAF Navigators to Combat Systems Officers, the merger of SUNT into Undergraduate Combat Systems Officer Training (UCSOT), and pursuant to additional BRAC directives, the 12 FTW established the 479th Flying Training Group (479 FTG) with two flying training squadrons and an operations support squadron as a geographically-separated unit (GSU) at Naval Air Station Pensacola, Florida. Pursuant to USAF policy changes, AETC and CNATRA also discontinued joint training at Training Air Wing SIX with the establishment of the 479 FTG. Although NAS Pensacola remains the principal base for Student Naval Flight Officer (SNFO) training for the U.S. Navy and U.S. Marine Corps, the 479 FTG operates independently of this program with its own USAF T-6 Texan II and T-1 Jayhawk aircraft. Upon establishment of the 479 FTG at NAS Pensacola, the remaining "legacy" navigator training squadrons that had relocated from the former Mather AFB to Randolph AFB in 1992 were inactivated and the remaining T-43 Bobcat aircraft retired.

Air Battle Managers (ABM) are non-pilot / non-CSO officer aircrew who operate mission systems in the E-3 Sentry "AWACS" and E-8 J-STARS. Since October 1999, they have been considered "aeronautically rated officers" on par with USAF pilots and Navigators-cum-CSOs. ABMs complete Undergraduate Air Battle Manager Training (UABMT), an academic and simulator-only program under AETC cognizance at Tyndall AFB, Florida. As of May 2010, a new training syllabus at Tyndall AFB allows ABMs to receive their wings at the conclusion of UABMT, finally bringing their undergraduate flight training in line with pilots and CSOs. Follow-on simulator and flying training in the actual E-3 or E-8 aircraft takes place under the cognizance of Air Combat Command at Tinker AFB, Oklahoma and Robins AFB, Georgia, respectively.

Air Education and Training Command also provides follow-on training for most Air Force pilots, CSOs and enlisted aircrew in their assigned aircraft via Formal Training Units (FTUs). For those pilots and CSOs selected for assignment to fighter aircraft, they will complete the Introduction to Fighter Fundamentals (IFF) course, an AETC-administered program, at Randolph AFB, Texas, Columbus AFB, Mississippi, or Sheppard AFB, Texas, shortly following completion of undergraduate flying training and prior to reporting to their FTU. At IFF, pilots fly the AT-38B Talon.

FTUs not under AETC claimancy are:

Air University's professional military education schools prepare students from the Air Force, its sister services and both NATO and other U.S.-allied nations as they progress through their careers. Emphasis in these programs includes leadership, military doctrine and aerospace power.

The three primary PME schools are:

Both CAP and AFJROTC are subordinate to the Jeanne M. Holm Center for Officer Accessions and Citizen Development (Holm Center).

For a history prior to 1993, see Air Training Command

On 1 January 1993, Air Training Command absorbed Air University and changed the command designation to Air Education and Training Command (AETC). AETC assumed responsibilities for both aspects of career development: training and education. Missions such as combat crew training, pararescue, and combat controller training, and (later) space training transferred to the new command, so that airmen would report to their operational units mission ready.

Lowry AFB, Colorado, a technical training center with closed runways that, like the previously closed Chanute AFB, no longer conducted flight operations but conducted both non-flying officer and enlisted technical training, was added to the list of AETC bases closed by the Base Realignment and Closure Commission (BRAC) in the mid-1990s. This was followed by the BRAC mandated closure of Reese AFB, Texas, an Undergraduate Pilot Training base, in 1995. The transition to SUPT was completed in 1996, the delivery of the first JPATS aircraft in 1999, and the discontinuation of the controversial T-3 as an initial flight screening aircraft in 2000 following a higher than average fatal mishap record.

In response to the terrorist attacks on 11 September 2001, AETC went on a war footing, activating a Crisis Action Team and supplying both fighters and tankers from its wings for combat air patrols in American airspace as part of Operation Noble Eagle. An operational test and evaluation of JPATS began in 2002 at Moody AFB and upgrades to its Training Integration Management System (TIMS) were begun the next year, resulting in retirement of the T-37 Tweet and full implementation of JPATS with the T-6 Texan II in 2007.